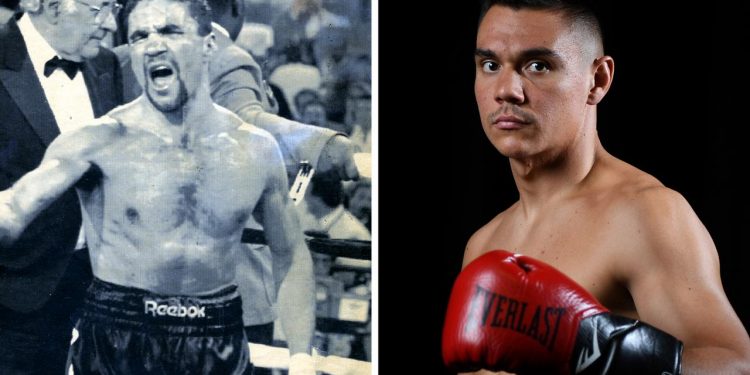 
It was one of the greatest injustices in Australian sporting history, leaving Jeff Fenech “heartbroken”.

And now, the 57-year-old boxing legend is using his cautionary tale as a warning to Tim Tszyu ahead of his U.S. debut (AEDT) on Sunday against Terrell Gausha.

“Tim has to knock him out there because I don’t trust the judges,” Fenech told foxsports.com.au on Tuesday.

“I’ve been through it there and I honestly believe Tim has to knock this guy out.”

Fenech thought he had done enough 30 years ago, when he faced Azumah Nelson in Las Vegas in a world title fight — and so did most people.

But the most important people in the room, the judges, did not see the fight the same way and ruled it a split decision draw.

It meant Nelson would keep his belt and left Fenech wondering what else he could have done.

“I can’t put my finger on it and tell you exactly what it done to me, but I can tell you factually that I was never the same fighter afterwards,” Fenech told foxsports.com.au back in 2018.

“I don’t believe that was a hard fight for me, I’d had lots of fights that were similar.

“But after the fight I came back home, obviously heartbroken and disappointed, and I was never the same.”

Fenech was speaking then ahead of Jeff Horn’s fight with Terence Crawford, again warning the Australian to dominate proceedings early or risk a similar fate.

Horn went down on that occasion, losing his WBO world welterweight title in a ninth-round stoppage defeat.

For Tszyu though, he is going global before even getting his hands on a world title belt — something Fenech applauds.

It only makes Sunday’s result even more important as the 27-year-old plans a world title bout in Las Vegas in September should he defeat Gausha.

“I’d like to think Tim knows this is the start of a huge thing so having a knockout and taking it out of the judges’ hands is one thing I hope he does,” Fenech said.

“Being impressive is another and I think he can do all of that.”

Tszyu’s ominous reply to big warning ahead of ‘dangerous’ debut

But what Fenech is asking is for Tszyu to do something that has never been done before — to knock Gausha out.

“This guy has never been knocked out,” Fenech said.

“He’s lost a couple of fights but he’s very good. I’ve watched him, I’ve seen his skillset, he changes levels, he can punch and box.

“It’s a huge test for Tim but like I said, he’s been tested before and never failed. I don’t think he will fail this time. It’s a big fight for Tim and would also be a huge statement. I just think Tim has to go out with the mindset I’m going to knock this guy out.”

It is something Fenech consistently mentioned on Tuesday and with good reason.

That Tszyu, for all his strengths in the ring, simply needs to find a finish to make sure he has the final say.

“They’re definitely going to look after their promoter. Their promoter is the person that brings all these referees and judges around, feeds them, wines them and dines them. I honestly believe Tim needs to knock this guy out. Not do it early but he just has to knock him out to make sure he gets this decision.

“I would not leave it in the hands of the judges if I was Tim.”

And Fenech does not think Tszyu needs to anyway.

Gausha claimed earlier in the week that Tszyu is a “one-trick pony”… that “what you see is what you get”.

Fenech though disputed that claim and that is the very reason why he is so confident the Australian can be the first to knock Gausha out on Sunday.

“I think Tim has the ability to adapt and change,” Fenech said.

“That’s the one thing I am a huge Tim Tszyu fan because [of]he can adapt. He can box, he can punch, he can do everything. But in this fight, he is going to have to finish him. He’s got to go out there, be aggressive, punch in bunches and knock this guy out. I’m sure Tim can change his plan very easily.”

And if Tszyu had not heard it enough, Fenech had one final message for him when giving his prediction for Sunday’s fight.

“I predict Tim Tszyu will knock his opponent out,” he said.

“Because if he doesn’t, we’re not sure what’s going to happen. So, Tim, please take this note — knock this guy out, don’t leave it up to the judges.”