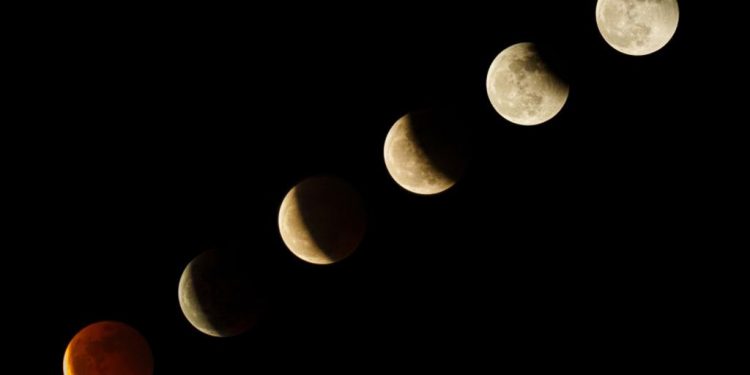 May 15 marks this season’s full “flower moon,” historically occurring around the time flowers are in full bloom for spring in North America, according to the Farmer’s Almanac. But this one’s extra special — because it’s also the first of two lunar eclipses in 2022, and slated to be a big one.

Skywatchers know that a moon is “super” when its orbit reaches one of its closest points to Earth — also called “in perigee” (and the opposite of which, “in apogee,” means the moon is at its furthest).

Some astro-forecasters say that Sunday brings more of a semi-super moon — as there’s an ongoing debate in the scientific community about the true definition — which still makes for a pretty spectacular eclipse portion of the Americas, Antarctica, Europe, Africa and the East Pacific.

That’s where its other grisly nickname comes in.

What is the meaning of “blood moon”?

A blood moon occurs only during a lunar eclipse and emits an orange-red glow during its several minutes of transit through Earth’s shadow, due to an optical illusion caused by our atmosphere.

Just before the eclipse peaks — or when the sun and moon are in perfect opposition — light that normally reflects directly off the lunar surface will be redirected through Earth’s atmosphere, filtering out the blues of the UV spectrum so that only the reds and oranges remain — hence the changing effect.

And, the bigger the moon appears, the more dramatic the show.

When is the blood moon lunar eclipse?

Most of Europe, Africa and the US — minus parts of the Pacific Northwest, Hawaii and Alaska — plus eastern Canada, New Zealand and the whole of South America, find themselves in the sweet spot for moon gazing on May 15, as they’ll enjoy either a partial or full eclipse, depending on their locale. Meanwhile, Asia, Australia and parts of West Africa will have to wait their turn.

The exact timing of the eclipse varies with skywatchers’ location, but TimeandDate.com says that a partial eclipse begins on the East coast at 10:28 p.m, and fades to red by 12:11 a.m. on Monday, May 16. The cycle ends at 1:55 a.m. EDT.

Or, you can see it with the best view, thanks to NASA, on YouTube.

When is the next lunar eclipse?

The next and last lunar eclipse of 2022 occurs on Nov. 8, and will be seen from parts of Asia, Australia, North America, Europe and the Arctic Circle — and even better from South America.