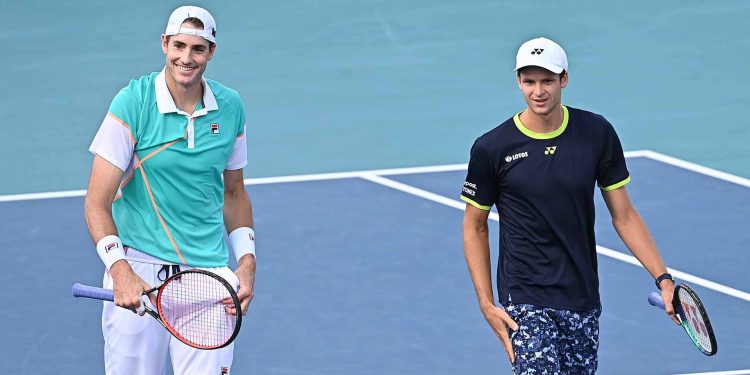 
Hubert Hurkacz and John Isner came through a nerve-wracking finish to upset second seeds Rajeev Ram and Joe Salisbury and clinch the remaining semi-final spot at the Miami Open presented by Itau on Wednesday.

The Polish-American pairing required an Isner ace to convert their fourth match point and complete a 7-6(7), 6-3 victory at Hard Rock Stadium as they continued to impress in their first tournament playing together.

Hurkacz and Isner recovered the only break points of the first set from 30/40 in the sixth game and were able to hit back from a tricky position again in the tie-break. They saved two set points, one of them with a huge Hurkacz ace, before converting the first one of their own after Ram pushed a difficult volley wide.

Two breaks in the second set was enough to clinch the match for the wild card pairing, although they had to hold their nerve in a dramatic final game as Ram and Salisbury recovered from 40/0 on the Isner serve to force a sudden death deciding point. The American duly delivered an ace to extinguish the second-seeded pairing’s mini-revival and set a semi-final clash with Australian Open champions Thanasi Kokkinakis and Nick Kyrgios.

Hurkacz and Isner produced clutch serving under pressure throughout the one-and-a-half-hour encounter, firing nine aces, saving five out of six break points they faced, and winning 78% (38/49) of points behind their first delivery, according to Infosys ATP Stats.

Although seeking their first title together, Isner and Hurkacz have both won ATP Masters 1000 titles before. Isner has triumphed twice in Indian Wells as well as in Rome and Shanghai, while Hurkacz lifted the trophy in Paris in 2020.

Defeat for Ram and Salisbury leaves them still hunting a second Masters 1000 title. They lifted the trophy in Toronto last year and followed that with a second Grand Slam title at the US Open, triumphs which have contributed to Salisbury’s rise to World No. 1 that will be confirmed in next week’s edition of the ATP Rankings.

Lloyd's of London says Ukraine War will not cause solvency challenges