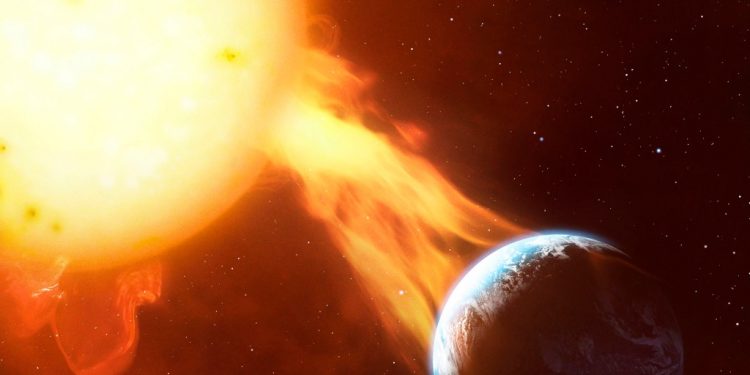 
Space weather experts have spotted the sun ejecting a large mass of particles and think this could hit Earth in the next few days.

When ejections like this hit Earth’s magnetic field, they can cause solar storms.

An ejection like this is known as a solar flare called a coronal mass ejection (CME).

A CME is a huge expulsion of plasma from the sun’s outer layer, called the corona.

These expulsions shoot through space and can hit Earth.

Fortunately, the solar storm predicted for this Wednesday, March 23, is only likely to be a “G1 minor,” meaning you probably won’t even notice it if it happens.

Experts at Spaceweather.com explained: “Another CME is heading for Earth, and it’s a little off target.

“A glancing blow (or near miss) is possible during the late hours of March 23rd, according to NOAA forecasters.

“This will be the 3rd time in the past week that a CME has almost landed a direct hit.

“Even a near miss can produce bright Arctic auroras. Best case scenario for auroraphiles: A minor G1-class geomagnetic storm.”

The “G1 minor” category of solar storm could cause weak power grid fluctuations and have a small impact on satellite communications.

A G1 storm can also confuse migrating animals that rely on the Earth’s magnetic field for a sense of direction.

One good thing about solar storms is that they can produce very pretty natural light displays like the northern lights.

Those natural light displays are called auroras and are examples of the Earth’s magnetosphere getting bombarded by solar wind, which creates the pretty green and blue displays.

As well as causing issues for our tech on Earth, they can be deadly for an astronaut if they result in injury or interfere with mission control communications.

The sun is currently at the start of a new 11-year solar cycle, which usually sees eruptions and flares grow more intense and extreme.

This story originally appeared on the Sun and was reproduced here with permission.