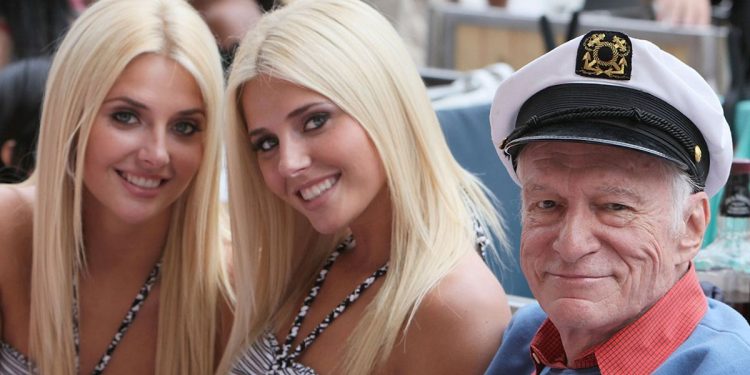 
The twins who plan to sue the Playboy brand claim Hugh Hefner gave them drugs known as ‘leg spreaders’ because users were powerless to resist.

Karissa and Kristina Shannon allege they were first lured to sleep with the American tycoon on their 19th birthday.

The sisters allege they were pushed into unprotected group sex with Hefner, who had plied with alcohol and drugs.

As they lift the lid on his sex “cult” at the world-famous mansion, Karissa and Kristina claim they were abused by the eccentric millionaire.

They say Hefner “had a black soul” when it comes to the bedroom and the experience left them suffering from PTSD, depression and needing counselling.

The women say he gave them quaalude, a sedative known for its hypnotic qualities.

Speaking to the Sunday Mirror, Kristina claims: “On our 19th birthday he took us to a club. He bought us alcohol even though the US age limit is 21.

“When we got back, Kendra was like, ‘Do you girls want to smoke some weed in Hef’s room’? But when we got into his room, Kendra left. We got really nervous.

“Hef noticed and said ‘Why don’t you slip into something more comfortable?’ He pulled out silk pyjamas from Italy and we put them on. He pulled out this big pill like the type a horse would take.

“It was quaalude, which we found out he used all the time.”

Mirror Online have approached the Playboy group for comment.

Karissa says she fell pregnant at 19 to Hefner when he was 83 – and “it felt like carrying the devil’s child”. She had an abortion without the tycoon ever knowing.

Kristina tells the Sunday Mirror: “Hef acted like he owned you. If we broke his rules, six guards would drag us to our room and not let us leave.

“Hef called it ‘HMH arrest’, after his initials. He preyed on vulnerable young girls like us. He would offer you the world, then keep you trapped in his house, which was like a golden prison.

“When Hef died, part of us did feel sad, but another part was like, ‘OK good, no more girls are going to be groomed and ruined like we were’. I thought Playboy was one big family – now I can see it was a cult.”

The twins, now 32, plan to sue Playboy for emotional distress and trauma.

Kristina adds: “We were Playmates, employed, and everything happened at the mansion, so we want to go after them. We are speaking out because we want people to know who he truly was and what was going on behind closed doors.”

Karissa says that when first lured to Hefner’s bedroom, he gave them drugs which left them “fuzzy and loose”.

She adds: “It was creepy and gross. We felt filthy, disgusted, like our bodies weren’t ours.”

The sisters claim Hefner acted like a king, told them to call him Papa – and that he groomed them, drawing parallels with other powerful tycoons like Harvey Weinstein and Jeffrey Epstein.

Karissa and Kristina, who spent two years at the Playboy mansion, believed in starry-eyed innocence was home to a world of glamour, celebrity and fun.

But the reality, they say, was group sex, drugs and strict controls – a world away from what they had naively imagined.

Karissa added: “We had just turned 18 and were so naive. I remember Hef being very charming and nice. He was wearing silk pyjamas and slippers he always wore with his red robe.

“He was like a king in a castle – so powerful. He said, ‘Hey, will you come sit next to me?’ We could see other Playmates getting jealous.”

The twins moved in and were given $1,000 a week each to appear in Girls Next Door, a reality show about Hefner and his girlfriends, who included Kendra Wilkinson.

Secrets of Playboy is available to stream on C+I PLAY and on Crime + Investigation next month.

Home Price Growth Eased Up In Q4 But Not Enough To Help Buyers: NAR