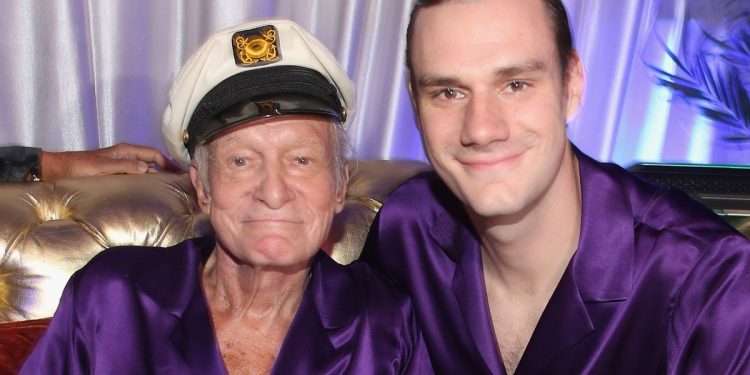 It’s been almost five years since Hugh Hefner passed away at the age of 91, but the Playboy mogul is still hitting the headlines and igniting debate.

As the world reexamines the late star’s legacy – thanks to shocking docu-series Secrets of Playboy – the magazine founder’s youngest son has become a father once again.

Cooper Hefner and his wife, Harry Potter actress Scarlett Byrne, welcomed twins into the world earlier this month – announcing the happy news via Instagram on Tuesday.

As new generations of Hefners continue to be born, we take a look at Hugh’s complicated and wild family tree…

The founder of Playboy may have liked to have consider himself a liberal and a self-proclaimed leader of the free-love movement, but the late star’s family tree begins with his two conservative parents.

Born in Chicago in 1926, Hugh was the oldest of two children for his father Glenn Lucius Hefner, an accountant, and mother Grace Caroline (Swanson) Hefner, a homemaker and teacher.

Through his father’s line, the late star was a descendant of Plymouth governor William Bradford – an English Puritan separatist originally from Yorkshire.

“My folks were raised pure prohibitionist. They were very good people, with high moral standards — but very repressed,” Hugh told THR in 2011.

Hugh and his younger brother Keith, who passed away in 2016
(

“There was no hugging and kissing in my home.”

Hugh’s younger brother, Keith would go on to become part of the Playboy empire – organising the training of Bunnies and recruiting new models.

Throughout his life, Hugh often got involved in many political causes and campaigns – perhaps something he was always destined to do thanks to his family connections.

Prior to the 2004 US election, it was revealed that the American magazine publisher was a distant relative of both presidential candidates George W. Bush and Sen. John Kerry.

It was believed Hugh and the former US President never met
(

The Playboy founder was much happier to hear he was distantly related to Sen. John Kerry
(

After learning he was the ninth cousin of both men, proud Democrat Hugh joked: “Well I feel closer to Senator Kerry.”

He continued to CBS News: “”You know I’m an 11th generation direct descendent of William Bradford, who came over on the Mayflower, a direct descendent of a puritan. I suppose that it is not a big surprise but it is certainly unique to be a relation to both candidates.”

Back in 1949, Hugh tied the knot for the first of three times – marrying Northwestern University classmate Millie William, who would go on to father two of his children during their 10 year union.

Hugh and his first wife Millie
(

Hugh lost his virginity to his first wife, even though she admitted to cheating on star during his time in the army.

“I had literally saved myself for my wife, but after we had sex she told me that she’d had an affair,” he told the Daily Mail in 2007.

“That was the most devastating moment in my life. My wife was more sexually experienced than I was. After that, I always felt in a sense that the other guy was in bed with us, too.”

Their decade-long marriage saw them welcome daughter Christie and son David into the world together before splitting.

Not much is known about Hugh’s oldest son – with the 57-year-old opting to stay out of the spotlight and instead find a career away from the Playboy empire.

Christine, however, went on to become Playboy’s company president in 1982, and then chairman and chief executive executive officer in 1988.

“Well, I have made the comment that [if] Christie hadn’t existed, our promotion department might want to invent her,” Hugh told the New York Times in 1979.

“She’s rather ideally suited, both symbolically and actually, for the role that she’s playing in the company and the role that I hope she will play in the future.”

Adding to the conversation about her role at the magazine, Christie stated: “I’m a lot more anxious to change what’s going on in Cosmopolitan and Family Circle magazines than I am in Playboy, as far as roles for women are concerned.”

Hugh became a married man for the second time in 1989 – marrying 26-year-old Kimberley Conrad when he was 63-year-olds.

The couple had met at a Playboy shoot two years prior, and went on to have sons Marston and Cooper.

Hugh and model Kimberley met thanks to his magazine empire
(

Marston controversially lived with his father in the Playboy mansion for the first eight years of his life – something he later seemingly had conflicting feelings about.

“Well, as a 15-year-old kid, seeing naked people occasionally, that’s — it’s just the lifestyle of growing up as Hugh Hefner’s son, in his shadow,” he recalled to GQ in 2008.

Marston is no longer in the public eye
(

Marston was often considered a ‘Hef Junior’ and had been pipped to follow in his father’s footsteps, but disappeared from the spotlight after he sentenced to 52 weeks in a domestic violence program in 2012.

Kimberley and Hugh eventually split in the 90s but they seemed to remain on good terms – with the mum-of-two moving into a $7million home next door to the infamous Playboy mansion.

Hugh even called his ex-wife “the love of my life” when announcing their split, and the pair remained legally married until he finally filed for divorce in 2009.

The official split only occurred after Kimberley sued her ex, claiming he owed her millions due to their prenuptial agreement

The divorce was finalised in 2010 and it was reported that the one-time couple came to an agreement on a confidential property settlement.

Hugh’s third and final wife was Playmate Crystal Harris, whom would go on to become his widow when he died in in 2017.

The couple tied the knot on New Year’s Eve in 2012, but not before some major drama – with their original wedding being called off at the last minute.

Crystal, then 26, famously bailed on 86-year-old Hugh just days before they were due to tie the knot in June 2011.

The cancelled nuptials caused major chaos for Hugh’s business too – as the July issue of Playboy featuring Crystal as “Mrs Crystal Hefner” had already begun to hit the shelves.

It seems the model had a change of heart, and the pair went on the reconcile and eventually exchanged vows in an intimate ceremony on December 31 2022 – remaining married until Hugh’s passing in 2017.

“I felt how much he loved me. I loved him so much,” Crystal told People shortly after the death of her husband.

She added: “I will feel eternally grateful to have been by his side, holding his hand, and telling him how much I love him.”

Moderna ‘happy’ with results from its kids vaccine trial, but is it enough for the FDA?

Moderna ‘happy’ with results from its kids vaccine trial, but is it enough for the FDA?