Hugh Jackman’s revival is a let-down 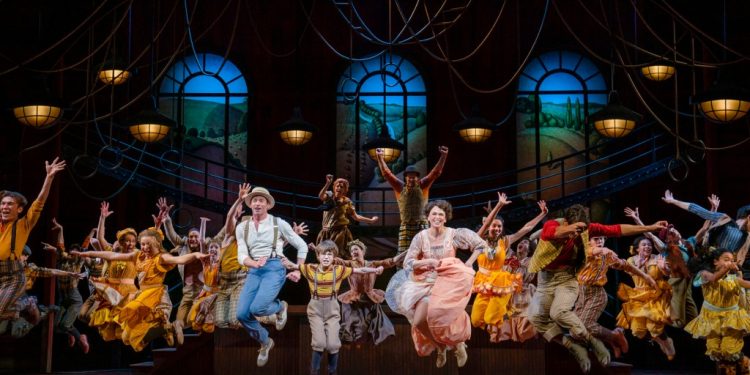 
The meteoric hype surrounding “The Music Man,” which opened Thursday night on Broadway, has been building now for — somehow — three years.

The musical boasts the same creative team as Bette Midler’s wildly successful “Hello, Dolly!,” and we all hoped it would be the bandleader of Broadway’s post-pandemic return. Adding more sparkle, Hugh Jackman plays the leading man, Harold Hill, and on paper, it’s the role of the celebrated actor’s lifetime.

Running time: 2 and a half hours with one intermission. At the Winter Garden Theatre, 1634 Broadway.

“The Music Man,” I’m sorry to say, does not live up to our oversize expectations. Quite unexpectedly, you leave not raving about Jackman, one of Broadway’s hottest sellers, but the music woman — Sutton Foster, who plays Marian “The Librarian” Paroo. She’s a wonder and the main reason to buy a ticket.

Much has been made of Foster not having the soaring soprano range of Barbara Cook and Shirley Jones, but that doesn’t matter. Hers is as thoughtful, funny, threatening, witty, maternal and romantic a Marian as you’ve ever seen. She never settles for a schoolmarm stereotype and makes 65-year-old lines fresh.

When the actress sublimely sings Meredith Willson’s “Till There Was You,” it’s a victory — for her, for Marian, for us and for a production of an American classic that, up until then, struggles to find an assured identity.

Sometimes the show is dark and moody, determined not to have too much fun with a story about a con artist who wins in the end despite his misdeeds. At others, it’s the “Music Man” of our cringeworthy high school memories — painfully corny when it need not be. The friendly opening night crowd was not sure when to laugh at the jokes, and that’s a major problem for a musical comedy.

Jackman plays Harold Hill, a traveling salesman who arrives on the train in repressed River City, Iowa, with the aim of swindling the town by forming a kids’ marching band. He’ll overcharge gullible parents for the instruments and uniforms, teach bogus lessons and then hightail it to the next city as soon as folks catch on. Then, whoopsie, he falls in love with hardened Marian.

The role was famously played on Broadway and on screen by Robert Preston, the memory of whom Jackman spends most of his time running away from. When he speak-sings “Trouble” — one of the most rousing tunes in the entire musical theater canon — he changes it up everywhere he can, even if that means sacrificing punch and momentum. “Ya Got Trouble” and, say it ain’t so, “Seventy-Six Trombones” are jarringly ho-hum here. The whole first act meanders to a fizzle.

What Hill is meant to achieve in those big numbers is convincing a bunch of stubborn Midwesterners, with his radiant charm and charisma, to trust and embrace a smooth-talking charlatan. But Jackman’s interpretation is so bizarrely dour — as if he’s judging his own character’s sins for us — that their infatuation makes no sense.

He and Foster dance Warren Carlyle’s choreography better than any previous pair of actors could’ve. The movement is easy on the eyes (even if Santo Loquasto’s flat, lusterless set is not) but light on storytelling. When Hill arrives, his insurgent energy sparks a fire in River City’s youth and you’d hope to feel their rebellion in the dancing. A lot of it, though, is cute and wiggly.

Jackman and Foster are joined in the musical, directed by Jerry Zaks, by a helluva stacked cast. Tony Award winners (such as Jefferson Mays as Mayor Shinn, Jayne Houdyshell as his rigid wife and Shuler Hensley as Marcellus) utter just a few lines. We leave wanting more from them because we’ve seen how great they can be — like if Laurence Olivier had a short walk-on role in “Young Sheldon.”

In the lead-up to “Music Man,” many friends admitted to me that they just plain don’t like the show. I’d reply that they haven’t yet seen a production that lives up to the wondrous material. The staging at Canada’s Stratford Festival in 2018, for instance, that many New Yorkers saw was an unforgettable triumph.

It’s been 20 years since “The Music Man” last played Broadway. Maybe 20 years from now, an invigorated Harold Hill will hop off the train at Grand Central and show ‘em how it’s done.