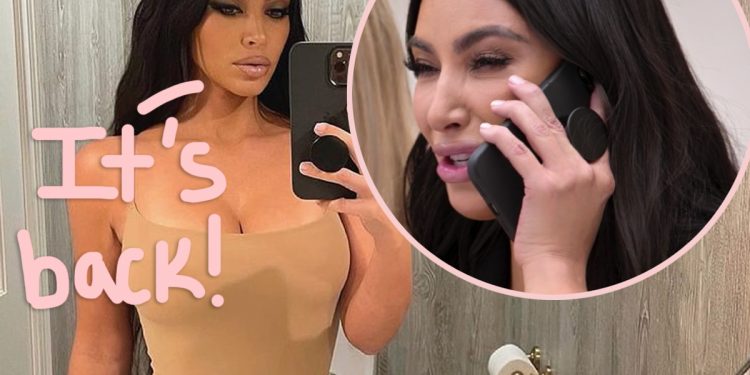 
Kim Kardashian’s ugly cry face has made its return, and fans are loving it!

As viewers know, the 41-year-old reality star alum has been mocked for her crying face ever since season two of Kourtney and Kim Take New York when she broke down over her failing marriage to Kris Humphries in 2012 and birthed the legendary meme. Now, it has been brought back up once again, thanks to what went down in the premiere episode of the fam’s new series, The Kardashians!

As we previously reported, the first episode focused on Kim’s infamous sex tape with Ray J after her 6-year-old son Saint saw something pop up about a potential second video being leaked while playing on Roblox on his iPad. When Kim packed for her hosting gig on Saturday Night Live with Kris, Khloe, and Kourtney later in the episode, she hopped on the phone with her lawyer Marty Singer to discuss the possibility of some new, unreleased footage being out there.

The SKIMS creator held in together with her legal team at first. However, she ended up bursting into tears (above, inset) while talking with her ex-husband Kanye West over the phone:

Although Kimmy Kakes was clearly not happy with the situation, fans could not resist making fun of her ugly crying face again! That’s Botox, baby! Ch-ch-check out the Twitter reactions (below):

“Kim Kardashian has the UGLIEST cry, like how is that even possible?”

“First episode and we already got a @KimKardashian crying face, nature is healing.”

“kim’s crying face is so hilarious”

“Wait the new show is freaking awesome! Hahaha we got to see Kim’s crying face on the first episode you guys!”

“Kim’s crying face always gets me”

“Lemme get my Photoshop ready because KIM IS CRYING AGAIN AND IT’S EVEN BETTER THAN LAST TIME.”

“Kim crying like a devastated toddler is sending me.”

What can we say, the ugly crying face is a classic! What did YOU think about the first episode of The Kardashians, Perezcious readers? Love it or hate it? Reactions to Kim’s new crying face? Let us know all of your thoughts in the comments!

[Image via The Kardashians/Hulu, Kim Kardashian/Instagram]