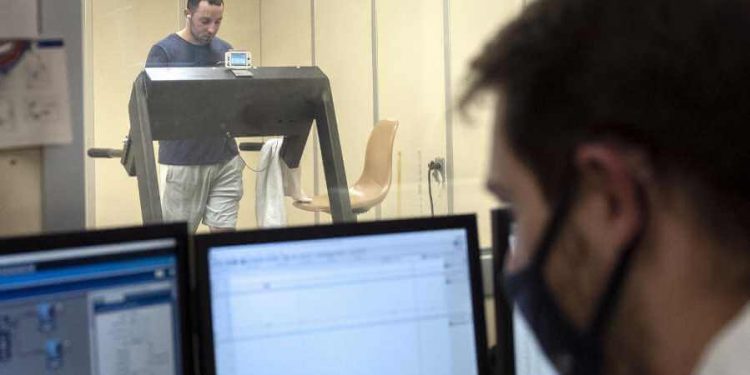 
According to the researchers, while previous studies have theorized that a 35°C wet-bulb temperature was the upper limit of human adaptability, that temperature was based on theory and modeling and not real-world data from humans.

Kenney said that he and the other researchers wanted to evaluate this theoretical temperature as part of the PSU H.E.A.T. (Human Environmental Age Thresholds) project, which is examining how hot and humid an environment has to be before older adults start to have problems tolerating heat stress.

For this study, the researchers recruited 24 participants between the ages of 18 and 34. While the researchers plan to also perform these experiments in older adults, they wanted to start with younger people.

“Young, fit, healthy people tend to tolerate heat better, so they will have a temperature limit that can function as the ‘best case’ baseline,” Kenney said. “Older people, people on medications, and other vulnerable populations will likely have a tolerance limit below that.”

Prior to the experiment, each participant swallowed a tiny radio telemetry device encased in a capsule that would then measure their core temperature throughout the experiment.

Then, the participant entered a specialized environmental chamber that had adjustable temperature and humidity levels. While the participant performed light physical activity like light cycling or walking slowly on a treadmill, the chamber either gradually increased in temperature or in humidity until the participant reached a point at which their body could no longer maintain its core temperature.

After analyzing their data, the researchers found that critical wet-bulb temperatures ranged from 25°C to 28°C in hot-dry environments and from 30°C to 31°C in warm-humid environments — all lower than 35°C wet-bulb.

“Our results suggest that in humid parts of the world, we should start to get concerned — even about young, healthy people — when it’s above 31 degrees wet-bulb temperature,” Kenney said. “As we continue our research, we’re going to explore what that number is in older adults, as it will probably be even lower than that.”

Additionally, the researchers added that because humans adapt to heat differently depending on the humidity level, there is likely not a single cutoff limit that can be set as the “maximum” that humans can endure across all environments found on Earth.

Early Menopause May Raise a Woman’s Odds for Dementia