Hundreds of teachers in London have been able to book coronavirus vaccinations after being forwarded links intended for NHS workers, it was claimed today.

A booking link and password reserved for staff at Barts Health NHS Trust were circulated among school staff groups via WhatsApp, according to the BBC.

Several teachers were able to bypass the vaccines priority list – which says over-70s and frontline healthcare staff should be first – and have already received their jabs.

The exploit was distributed to local school staff in the Labour-run boroughs of Hackney and Camden, as well as in Barnet. Teachers said the messages had been sent via school management and were spreading in private WhatsApp groups with dozens of members.

Labour has repeatedly called for classroom staff to be prioritised for Covid vaccines, arguing it could get children back in education sooner.

The Barts trust said it was investigating the reports and promised to make its booking system more secure. It said anyone skipping the queue would be turned away from their appointment, but the BBC reports ‘some’ teachers have already been jabbed.

The trust has admitted it had sent booking links to non-frontline hospital staff to use up leftover doses of its vaccines. It is thought that the exploit was leaked this way.

It comes amid reports over-60s are also now receiving their first doses in London and Greater Manchester, as the UK’s vaccine rollout continues at unprecedented speed.

One senior London MP told MailOnline the vaccine rollout was progressing faster than expected. ‘We are already doing the 60 years olds now. I think they will be through the 60s very quickly,’ they said. 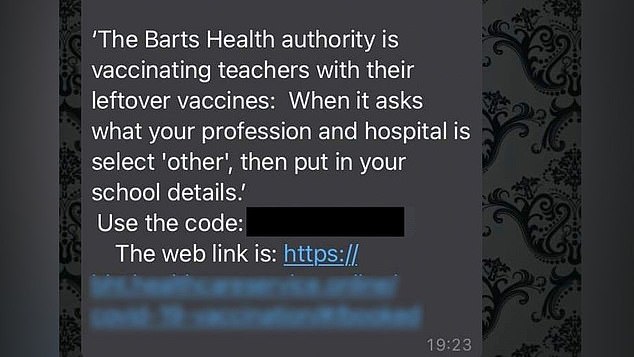 A message shared by teachers on a WhatsApp group. Some have been able to book appointments for Covid-19 vaccines with Barts Health 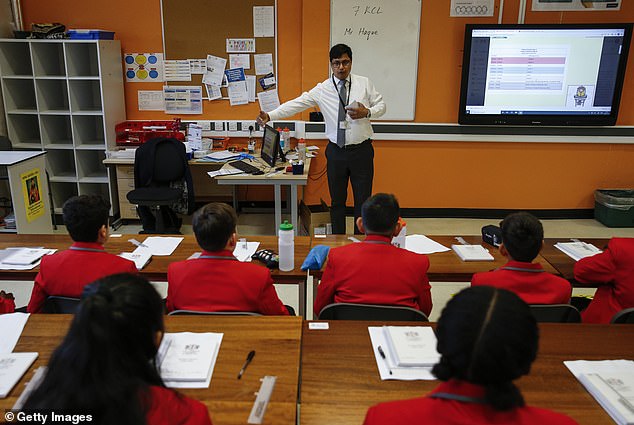 Hundreds of teachers in London have been securing vaccine appointments via an NHS link. There is no suggestion that the teacher pictured has booked a Covid-19 vaccination early 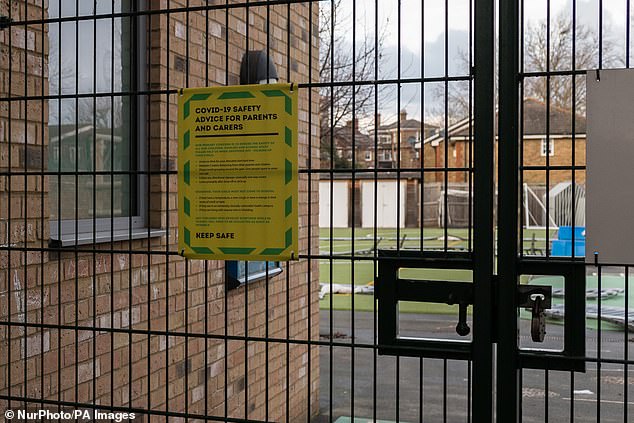 A view of a poster informing on coronavirus safety measures outside Floreat Wandsworth Primary School in Wandsworth, London on January 3 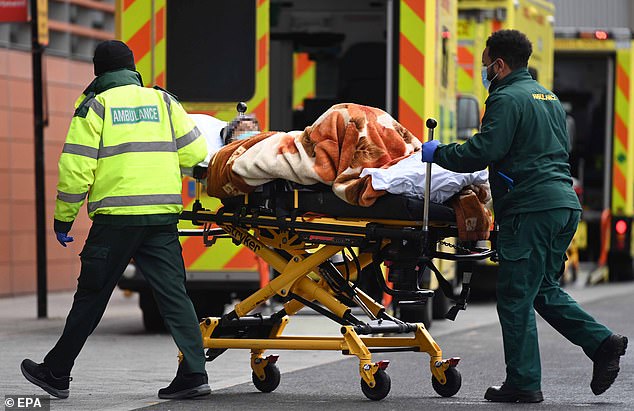 Ambulances pictured parked outside the Royal London Hospital, parts of Barts Health Trust. Reports today suggest teachers have been able to book vaccines through the trust

GOVERNMENT SAYS IT WILL VACCINATE ALL OVER-50S BY MAY 6

The government today revealed it expects to have vaccinated all over-50s before May 6 as Boris Johnson plots a route to freedom.

The Cabinet Office disclosed the schedule as it confirmed that elections in England will take place on that date – citing the fact that the top nine groups will have received jabs as a reason it can ‘go ahead with these polls with confidence’.

Vaccines minister Nadhim Zahawi repeatedly refused to give a timetable for completing the first phase of the rollout – totalling 32million people – in interviews yesterday.

But the government said today: ‘The UK’s vaccination programme is planned to have reached all nine priority cohorts by May, meaning that the Government can commit to go ahead with these polls with confidence – and maintain the choice for voters between voting in person or remotely.’

However, the news is likely to fuel pressure from Tories to speed up easing of lockdown. The head of the 70-strong Covid Recovery Group has called for restrictions to be lifted altogether once all over-50s have been offered doses.

As optimism rises about the vaccination programme, the PM is preparing to bring back outdoor mixing and sport once children are back in school from March 8, with hopes of a ‘quick return to normal’ in April and May.

One Whitehall source said: ‘If the vaccine programme goes the way we think it will go, then you will start to see quite a quick return to normal in April and May.’

According to the Times, both team and solo sports could be given the green light to resume within weeks of March 8 – the day pupils are supposed to go back to the classroom.

Speaking in an anonymous capacity to BBC Radio 4’s Today programme, one teacher revealed he had been able to book an appointment through the Barts Health system.

‘I was sceptical that it would accept the appointment right up to the point it was confirmed,’ he said.

‘I thought during the booking process, if it wasn’t something I was entitled to, I thought there would be something that would close it down or would refuse the appointment.

‘But I went through the booking system and entered my details, my school details, my job details and then received a confirmation of the appointment itself.’

The Prime Minister is aiming to get 13.9million of the most vulnerable – over-70s, care home residents, NHS staff and the vulnerable – jabbed by mid-February.

But moves by health officials to give shots to those outside the top groups will raise fears over a vaccines postcode lottery, with leading south east London already getting first doses to four times more 70 to 74 year olds than Devon.

Their figures also suggest there are almost 300,000 over-80s still waiting for their first dose in England, as the drive steams through its ninth week.

Ministers have so far resisted calls to bump teachers up the vaccination list, saying they will follow the Joint Committee on Vaccination and Immunisation recommendations.

The chair of the Royal College of GPs, Professor Martin Marshall, warned there was ‘certainly a risk’ of queue-jumping during complicated vaccine roll-outs.

‘Most likely it was a genuine mistake that a link code an password that was sent out for Barts Health staff inadvertently found its way into the hands of teachers who were confused as to whether they were really in the priority group or not.’

He added: ‘There is an issue of the importance of not wasting the vaccine. So all clinics, including GP clinics, who are currently bring about 75 per cent of all the vaccinations in the country, at the end of the day or at the end of a batch, which can last for only about five days, you often have some vaccinations left over and then you’ll search around to make sure you can give them to somebody as high priority as possible rather than wasting them.’

Labour leader Sir Keir Starmer has called for all school staff to be vaccinated in England over the February half-term, when the four most vulnerable groups are set to have received their first doses.

The party says there is ‘growing evidence’ the jabs slam the brakes on transmission of the virus, reducing disruption to lessons if teachers test positive and possibly getting children back in the classroom sooner.

But a hardline union dismissed the plan to vaccinate the country’s entire classroom staff during a seven-day window this month.

Other unions have blasted Mr Johnson’s plans to open schools by March 8 as ‘too early’ and claimed they would ultimately lead to a fourth national squeeze.

Dr Mary Bousted, joint general secretary of the National Education Union, said last month: ‘If we come out too early, we will end up in lockdown again. We all want schools to open, but like the Prime Minister we want them to open when it is safe to do so. This has to be done sustainably and safely.

‘We agree with Boris Johnson that this is a balancing act. He has a duty to assess the easing of lockdown according to the progress and effects of vaccination, a reduction in cases and the various other criteria he has set out.

‘But in setting out a potential date of March 8, falling once again into his characteristic and too often misplaced optimism, he is pre-empting a decision that will have to be made in mid-February at the very earliest.’ 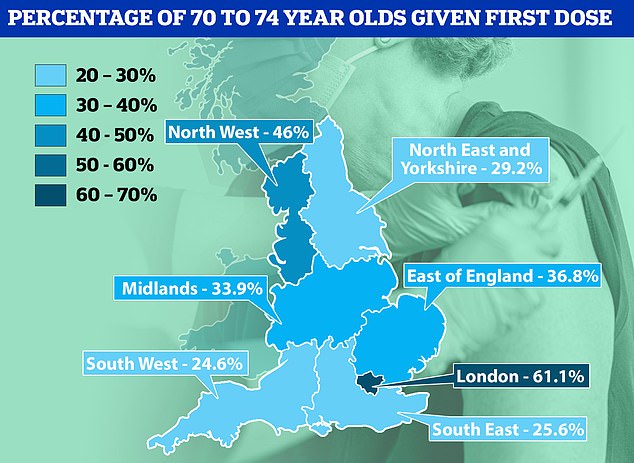 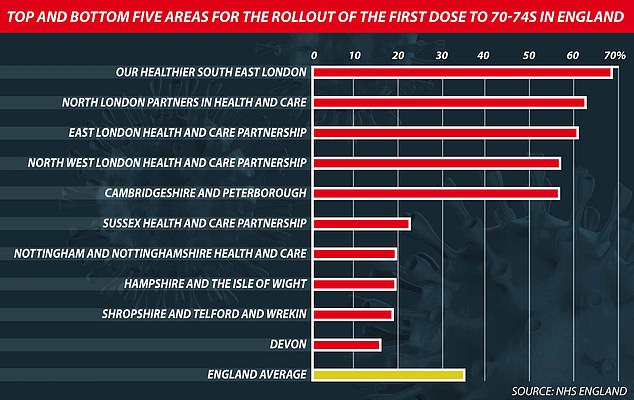 It was revealed in The Times today that over-60s are being offered Covid-19 vaccinations in Greater Manchester.

The Prime Minister’s spokesman told the paper they would not stand in the way of areas picking up the pace to rollout vaccines to other groups.

‘It’s for individual areas to ensure the rollout of the vaccination programme and there are some areas that have done a higher proportion of the top four groups,’ they said. 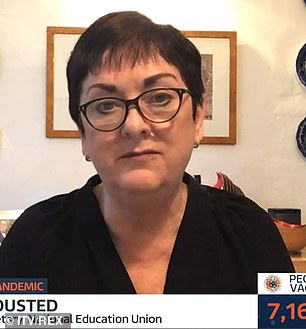 Dr Mary Bousted, from the National Education Union, has warned against reopening schools too early

‘We want to build on the momentum of the vaccine programme so for those in the cohorts just below the top four groups, we will ensure that we roll the vaccination programme out to them as soon as possible.’

An MP in the area, who has not been named, said over-65s in their constituency and other parts of the North West had already been vaccinated after receiving letters last week.

England’s coronavirus vaccine postcode lottery for the over-70s was laid bare yesterday amid mounting fears that the uneven rollout is leaving vulnerable people in certain parts of the country unprotected.

NHS England statistics revealed a huge gap in the proportion of 70-74 year olds vaccinated across the nation, with almost three-quarters inoculated in south east London compared to less than a fifth in Devon.

And there was a stark divide in the rollout of second doses for the over-80s — who are the most vulnerable to the disease. Northamptonshire gave out 232 times more top-up jabs than Nottinghamshire, which trailed at the back of the pack.

The data — which only goes up until January 31 and breaks down England into around 40 different groups — also showed nearly 55,000 care home residents were still waiting to receive their first dose, despite ministers claiming to have offered them to ‘every eligible care home’.

Critics today blasted the gaps, saying there was clearly a ‘problem’ and urging ministers to deploy more mobile vaccination centres to ensure all groups are reached.

Boris Johnson is aiming to vaccinate 13.9million of Britain’s most vulnerable — care home residents, over-70s, the vulnerable and NHS frontline staff — before mid-February amid mounting pressure to relax stringent curbs.

Eager to eat out, Malaysians get a taste for drive-in dining

No. 19 USC loses grip on Pac-12 title with loss to Colorado

Fishy Traits – The Poetry of Science