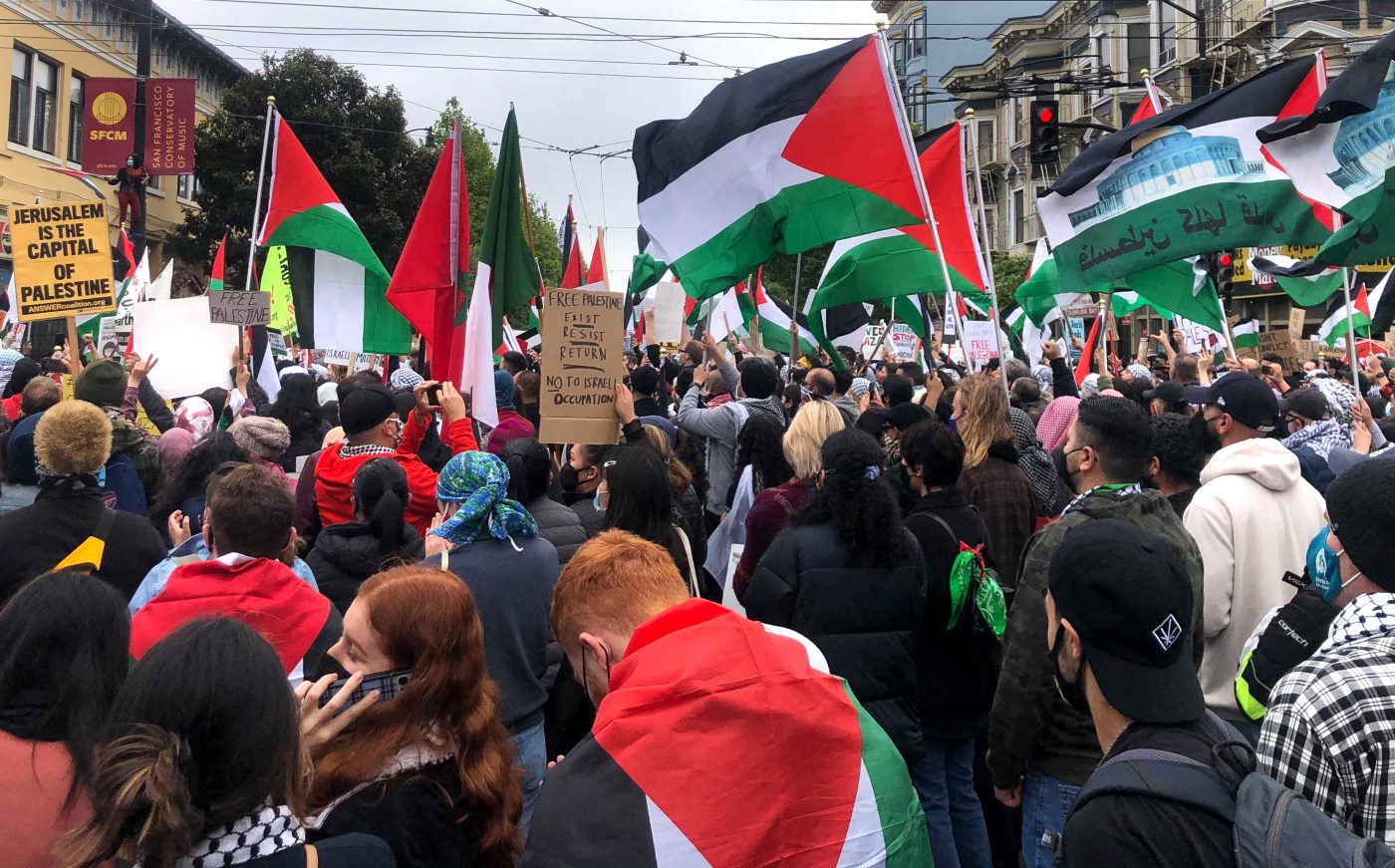 SAN FRANCISCO — Hundreds of people poured into the Mission District Saturday, rallying in support of Palestine amid a wave of deadly violence in the Gaza Strip.

A thrumming crowd of families with kids in strollers, teens on skateboards, college students and elderly Bay Area residents filled the corner of 16th and Valencia streets starting in the late afternoon, toting signs like “Jews Against Apartheid,” “Viva Palestina Libre” and “Indians for Palestine” before marching down Mission Street to the beat of several drums and chants.

Some Bay Area residents have been stirred by images of escalating violence that began last Monday and left 145 Palestinians dead in Gaza — including 41 children and 23 women — and eight dead on the Israeli side, all but one of them civilians, including a 5-year-old child. The violence began Monday when Hamas fired rockets into Israel.

On Saturday, Israel slammed the Gaza Strip with airstrikes, bombing the home of a Hamas leader, killing a family of 10 in a refugee camp, most of them children, and pulverizing a high-rise that housed The Associated Press and other media.

Bilal Alsallakh, 35, who lives on the Peninsula, arrived at the protest with a friend from Syria Saturday after watching the news all week with a rising sense of horror.

Ahmad, an 40-year-old Palestinian immigrant who declined to share his last name, came out from the East Bay with his wife, children and mother to attend the rally. Having lived in the U.S. for 14 years, he’s beyond frustrated with the U.S. government’s ongoing support of Israel, he said.

Saturday also marked Day of al-Nakba, or “the Catastrophe,” commemorating the estimated 700,000 people who were displaced in 1948 when Israel was founded.

“It’s upsetting to see just innocent people, civilians, being killed by our tax money here first,” he said, referencing the billions of dollars in aid that the U.S. provides to Israel yearly. “What’s happening, it’s just beyond what you can imagine.”

U.S. President Joe Biden, who has called for a de-escalation but has backed Israel’s “right to defend itself,” reportedly has spoken separately by phone this week with Israeli Prime Minister Benjamin Netanyahu and Palestinian President Mahmoud Abbas.

Several protesters linked the events in Palestine directly to the oppression of Black Americans. Cornelius Moore, 66, said that he has followed the Israeli-Palestinian conflict for decades as a longtime Black liberation and anti-apartheid activist.

“There’s just a really big connection between U.S. history because this is a settler-colonial country,” Moore said. “I’m just really angry, mainly, that the U.S. is continuing to unconditionally support Israel.”

As the crowd headed down Mission, they carried dozens of Palestinian flags, sometimes as capes or held high on flagpoles. Jamel Ouchene waved a 20-foot pole stacked with three flags, including the Palestinian flag, the Tunisian flag and that of Algeria, his home country, a staunch political ally of Palestine.

On Friday, he planted a Palestinian flag in front of Golden Gate Bridge as as an act of solidarity.

“I just get really emotional about it,” Ouchene said. “I want Palestinians to feel like they’re not alone. We walk with them, all the way.”

A heavy police presence with at least five vans tailed the protesters — who spanned across about four long city blocks — as they continued down Mission Street, but the groups did not appear to interact. “From the river to the sea, Palestine will be free,” the crowd chanted.

Taking up the rear was a man in his 60s named Robert, whose sign described himself as the son of Holocaust survivors. He declined to share his last name for fear of repercussions when he visits extended family in Israel this summer.

“Part of being an American is making it better, and as part of being a Jew, I feel obligated to say something,” he said.

How do you stay in love forever? Married readers share their tips

How do you stay in love forever? Married readers share their tips