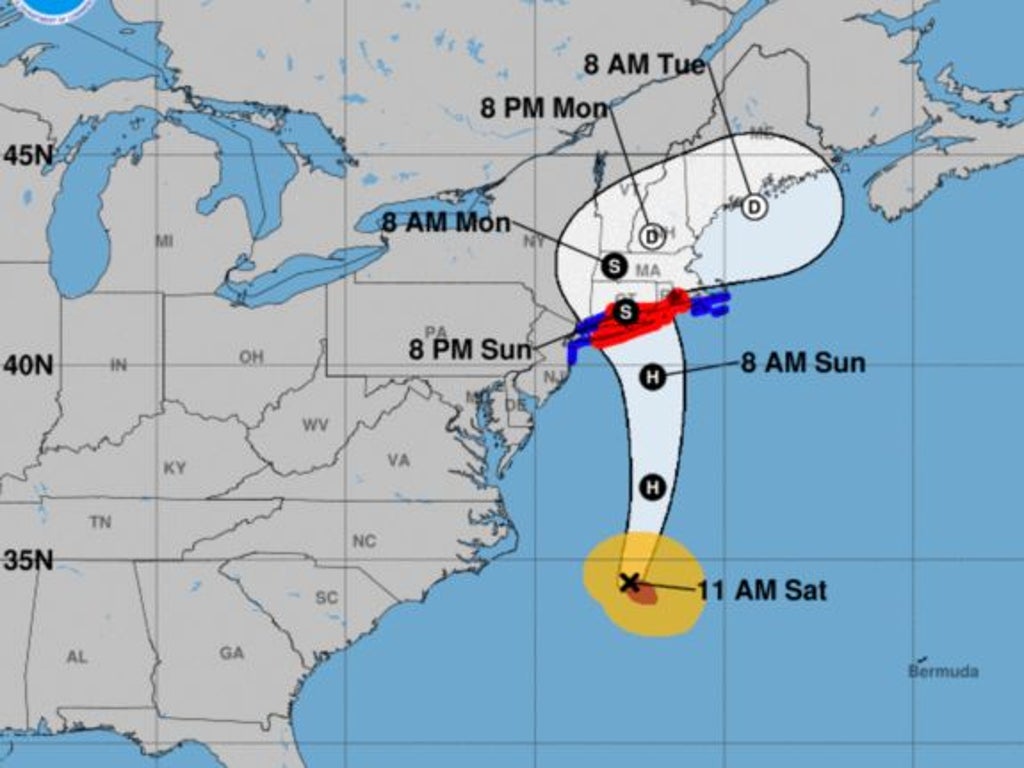 Tropical storm Henri likely to be hurricane before landfall

Storm Henri has strengthened to a Category 1 hurricane, and is bearing down on Long Island, New York, and southern New England.

It is expected to make landfall on Sunday, say forecasters.

The upgrade in status was released by the National Hurricane Center, who put out a warning of heavy rain, wind and flooding.

Henri was travelling further westwards than was originally expected, and looked on track to hit eastern Long Island. New York hasn’t had a direct hit from a major hurricane since Superstorm Sandy in 2012.

On Saturday morning, the storm was producing sustained 70mph (113kph), winds. Meteorologists have predicted that the storm will become a hurricane before it makes landfall on Sunday.

Both Long Island and Connecticut have been placed under a Hurricane warning ahead of the storm’s arrival. New York City and southern New York State are under a tropical storm warning, and Governor Andrew Cuomo has declared a State of Emergency.

Lines form at gas stations ahead of Hurricane Henri’s arrival

Drivers have reported lines at gas stations as resident of northeastern states in the path of Hurricane Henri scramble to prepare for the storm’s landfall.

NBC Reporter Len Besthoff said lines in Connecticut were long but “not insufferable” at a gas station he visited.

Another woman in Connecticut said she “survived” the lines at grocery stores and gas stations but noted the gas line was worse.

NASA astronaut Megan McArthur shared an image of Hurricane Henri from orbit as it closes in on the northeast US. “We just flew over the East Coast and saw #HurricaneHenri. Stay safe, friends,” she wrote in a Twitter post.

Hurricane Henri is expected to make landfall on Sunday.

Statue of Liberty and Ellis Island to close

The Statue of Liberty and Ellis Island in New York City will be closed tomorrow due to Hurricane Henri.

Joe Biden participated in a call on Saturday with leaders from northeastern states that will likely be affected by Hurricane Henri.

According to a White House synopsis of the call, the president and the governors discussed how FEMA and the National Guard would be utilised in the response to the storm.

FEMA is reportedly staging supplies and other resources in the area, including 700 response personnel.

The call participants also discussed how utility companies were preparing for the storm.

Massachusetts Governor Charlie Baker held a press conference Saturday ahead of Hurricane Henri’s landfall in the northeast US, expressing concerns that 300,000 people in the state could lose power.

“This thing may change again in some respects. I think one of the main points we want to make, though, is given all the rain we’ve had over the course of the past 30 days, the really significant amount of rain that’s going to come with this — no one disputes that — we do have the potential for significant power outages across the Commonwealth and people should plan accordingly,” Mr Baker said during the conference.

Hurricane Henri is expected to make landfall on Sunday near Long Island and Connecticut.

The declarations suspends the city’s open restaurants and open streets programs until 6am on Monday morning.

The order takes effect immediately and will last for three days or sooner if the mayor chooses.

The National Hurricane Centre advised that Hurricane Henri was picking up speed, likely resulting in dangerous weather conditions for areas in the storm’s path.

The centre warned that storm surges, high winds, and rainfall resulting in flooding were should be expected cross the northeast beginning Saturday night and lasting into Sunday.

The Red Cross has released a list of tips for individuals living in the path of Hurricane Henri. The organisation said it was preparing shelter and relief supplies ahead of the hurricane’s landfall and is is coordinating with emergency responders and local community leaders.

The Red Cross advised residents to monitor the local weather conditions, the listen to the orders of local officials and to evacuate if recommended. The group also advised people to check their emergency kits and ensure they have enough supplies on hand for several days without access to stores. The full list of recommendations can be found here.

New York Governor Andrew Cuomo has declared a State of Emergency ahead of Hurricane Henri’s landfall, which is expected early Sunday. The governor has deployed 500 National Guard troops to respond to emergencies resulting from the storm.

The National Weather Service in Boston reports that the south coast of the city will experience tropical storm-force winds by lunchtime on Sunday.

Parts of the northeast will likely experience rain and flooding beginning on Saturday night. The storm is expected to make landfall on Sunday.

Parler Wants Apology From Facebook After Report on Capitol Attack