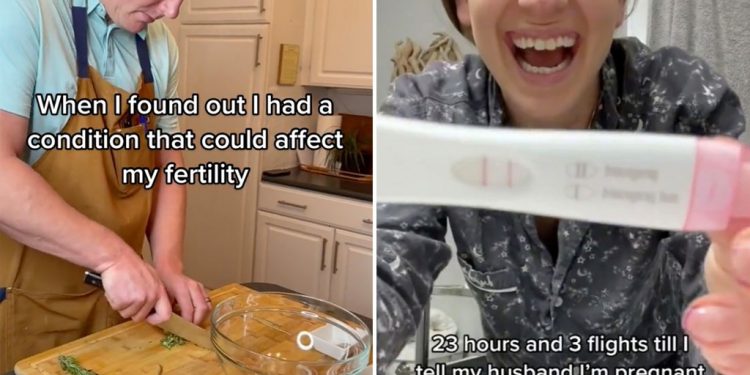 
A loving husband has taken the internet by storm after his wife shared a video of him cooking healthy meals to help with infertility — and now she’s expecting.

Rach Sullivan uploaded the heartwarming clip on social media with the caption: ”no words for this man”.

In the video, which has had over 1.6 million likes, Rach explained the couple found out she could have an issue that affects her fertility.

Desperate to have kids, her husband Tom did some research on foods that could help her hormones — and he even started an Instagram account to document the journey.

”When the only doctor recommendation we were given was to go on birth control, we turned to food as medicine,” she told.

According to Rach, Tom even as a chart on their fridge that he uses to grocery shop with and has a list of all the ingredients that sync with the different phases of her menstrual cycle.

”Every week he comes up with different fun ways to combine the ingredients.”

Since posting the video in October, the couple is now expecting a miracle baby.

Now, instead of hearty meals for balancing hormones, Tom prepares dishes with foods that are the same size as their baby — when the baby was the size of a peach, the husband whipped up a delicious peach crumble with ice cream.

Some viewers speculated it could be a girl as the two could often be seen indulging in sweets.

”This is the most wholesome content on the whole internet,” one viewer wrote.

”These people deserve the WORLD.

A fan added: ”It’s the fact that I come here every week to see that bump and food.”

”Y’all are so precious! I love the way you love each other. ❤️” someone else agreed.