Hyundai Motor and its affiliate Kia said they are not in talks with Apple about developing autonomous vehicles, disappointing investors who sent shares in both South Korean carmakers lower.

The pair said in a regulatory filing on Monday that they have been talking with multiple companies about co-operating to develop self-driving electric vehicles but no decisions had been made. Apple declined to comment.

Hyundai shares fell 6 per cent on Monday morning while Kia shed 13.6 per cent.

Last month Hyundai said it was in early-stage discussions with the US technology giant about building an electric car. The potential tie-up and the entry of the global tech group had been expected to shake up the highly competitive industry.

Shares in both companies have surged over the past month on speculation, and unsourced media reports, that the two South Korean companies were close to a deal with Apple and that Kia was likely to produce the highly anticipated Apple car in its factory in the US state of Georgia.

Hyundai’s confirmation of initial talks caught industry watchers off guard, and, according to analysts, also probably angered Apple. The iPhone maker is known for obsessive secrecy in product development and usually ties up suppliers and partners with non-disclosure agreements for work on unreleased products.

“Apple must have been really annoyed by the leak of information in the early stages,” said Lee Hang-koo, an adviser at Korea Automotive Technology Institute. While talks could resume later, he said, “Hyundai will probably be at a disadvantage as it lost some international credibility”.

Chung Sung-yop, an analyst at Daiwa, said: “Hyundai may have found the terms of negotiations too favourable to Apple, driven by Apple’s tough demands for technology sharing, etc.”

Other analysts said they expected that discussions would probably resume at some point given the fact that Apple needs an experienced partner to expand into the new industry. 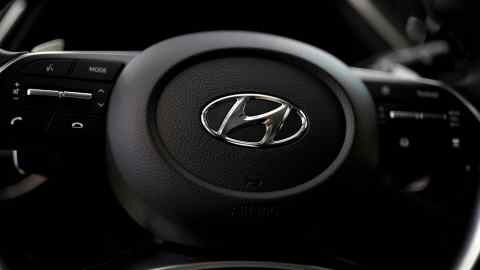 Chung added that the smartphone specialist might come back to Hyundai/Kia for their large-scale production capacity and the automotive technology to turn its designs and patents into cars.

He said the drop in shares of Hyundai and Kia could present investors with a buying opportunity as the longer term outlook for the pair remained bright in the fast-growing EV market regardless of a tie-up with Apple.

Hyundai has laid out plans to boost EV sales 60 per cent this year by launching new models based on its own dedicated platform.

“The shares have clearly overshot their fundamentals recently because of expectations for the alliance but Hyundai/Kia are already expanding their footing in the EV market,” said Chung. “Their EV market share is likely to increase further once their new cars using an exclusive platform are launched.”

Memes of The Weeknd getting lost during 2021 halftime show

Teofimo Lopez Reveals Date For the George Kambosos Jr. Fight as May 29