‘I already paid last week’: An estimated 70% of taxpayers could get free tax prep, but far fewer do. Here’s why. 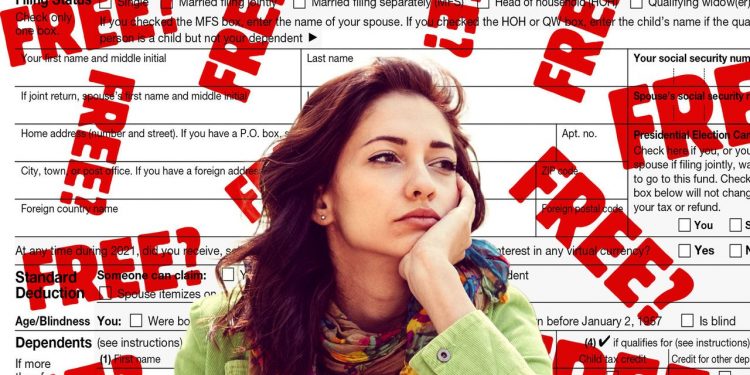 With tax season in full swing, the Federal Trade Commission recent sued Intuit, maker of the widely-used TurboTax products, alleging that the company is baiting consumers into thinking they can file their income taxes for free, when they’re not actually eligible for the no-cost service.

The case takes aim at one well-known tax prep software giant, but it shines a light on a broader issue: millions of Americans aren’t accessing free file services that they’re entitled to, potentially missing a chance to lessen the pain of tax season.

Intuit hotly disputes the FTC’s allegations that it steered customers away from $0 tax preparation, which is available to taxpayers who meet certain qualifications. TurboTax offerings have enabled nearly 100 million people to file their taxes for free over the past eight years, including 17 million people last year, Intuit says.

With roughly two weeks left in the 2022 tax season, FTC lawyers are asking a San Francisco federal judge to make the company stop its allegedly “deceptive advertising” that keeps repeating the word “free.”

Intuit says there’s nothing sneaky about the ads, according to court papers, but the company pulled them for the rest of tax season “in the spirit of cooperation.” Regulators knew Intuit was doing this days before they filed the case, the company’s lawyers added — a case the FTC spent nearly three years investigating while multiple tax seasons came and went.

“TurboTax is only free for some users, based on the tax forms they need,” FTC lawyers said in court papers.

“For many others, Intuit tells them, after they have invested time and effort gathering and inputting into TurboTax their sensitive personal and financial information to prepare their tax returns, that they cannot continue for free; they will need to upgrade to a paid TurboTax service to complete and file their taxes.”

Intuit’s business model isn’t premised on some sort of “bait and switch,” the company responded in court papers.

It’s about offering free access for simple returns, and as a user’s financial life grows more complex “they will remember the good experiences they had with TurboTax and choose to use TurboTax’s paid offerings,” Intuit said. That’s the way all sorts of companies do business, by “developing lifelong relationships with its customers by treating them fairly and providing them value.”

The initial burst of litigation continues through April 21 — days after the April 18 filing tax deadline — when Northern District of California Judge Charles Breyer is scheduled to hold a hearing on the FTC’s preliminary injunction motion.

The case brings new attention to Americans’ access to free tax filing, or the lack of it.

The chance for free tax preparation is “sorely lacking,” according to Nina Olson, the former National Taxpayer Advocate. When it comes to trying to file federal or state income taxes for free, the situation “is a mess,” said Olson, now the founder and executive director of the Center for Taxpayer Rights.

Costs may be even lower for most people, the IRS said. But that that might be cold comfort in a time of high inflation. Just in time for tax season, tax return preparation and other accounting costs increased 9.8% year over year, according to February inflation data from the Bureau of Labor Statistics.

As of late March, 38.5 million households prepared their own e-filed tax returns, down nearly 6% from the number of self-prepared returns at a comparable point last year, IRS data showed.

To be clear, even putting aside the commercial software touted for free use, there are ways to file federal taxes for free. They include the IRS Free File program, a partnership between private software companies and the IRS, for households making up to $73,000 (People above that income level are welcome to fill out their own tax forms for free, the IRS notes, but they won’t get help with calculations or other guidance.) There are also IRS programs such as Volunteer Income Tax Assistance that apply to households making up to $58,000.

It’s just that the programs can only do so much, according to some of the people involved.

In the past two decades, the Free File program has provided free returns to over 65 million people, including 4.74 million returns last year, said Tim Hugo, executive director of the Free File Alliance, the coalition of tax software providers participating in the free filing program. An estimated 70% of taxpayers are eligible to file their taxes for free, according to the Alliance’s research.

The program “has a long history of providing safe, easy, and free returns to millions of Americans,” said Hugo said, noting survey data showing users are very happy with the experience. “We just need more people to be aware of this great program.”

Hugo pointed to a recent study from the MITRE Corporation on the free filing program. Congress should earmark money for VITA and Free File awareness, researchers wrote. Still, the report said, “Instead of focusing on the participation rates, it may be enough to simply offer—and increase awareness of—high-quality programs for taxpayers who need and choose to use them.”

has also left the program. In a June 2020 earnings call, Jeffrey Jones, the president and CEO, called it “an important partnership” and a “positive program,” but said it was in the company’s best interest to “to move forward in a different direction.”

As for VITA, the pandemic “decreased the capacity,” said Laura Scherler, senior director of economic mobility and corporate solutions at United Way, which helps staff and run the in-person sites.

More than 82,000 volunteers in the program, along with another called Tax Counseling for the Elderly, prepared 3.6 million returns in 2019, IRS numbers show. One year later, the two programs prepared around 1 million less returns using 10,000 fewer people.

“This year, VITA sites are largely at capacity, which shows a strong demand for free tax prep services, but most programs do not have the funding to expand their operations to serve additional filers,” Scherler said.

The talk of free, simple returns stretches back decades. In 1985, President Ronald Reagan gave a speech envisioning a system where filing a tax return would be voluntary and “more than half of us would not even have to fill out a return.”

But tax code complexity that increasingly leans on software, confusing marketplaces and a lack of awareness are some of the reasons more Americans do not file their taxes for free despite the opportunities, some experts say.

Taxes have “become so intimidating in a way it absolutely should not be,” said Beverly Moran, a taxation expert at Vanderbilt Law School.

To help someone out recently, Moran prepared their taxes. She thought she found a company that would run the numbers for free on the straightforward return — until the site said it would charge $29 because the return included a claim for the Earned Income Tax Credit.

She stopped, found the IRS portal for free filing and did it all over, this time at no cost. But many people would’ve relented and paid the fee, she said. “It shouldn’t be so terrifying that everyone’s feeling they have to pay someone to do it.”

Sometimes it’s not anxiety, but comfort with what’s known. The same MITRE Corporation report delved into survey responses from taxpayers who used an array of paid or free ways to submit their taxes. The findings suggested cost wasn’t always a motivator; the top reason people chose their particular method was because they said used it before, or it was easy for them, researchers noted.

Is there a better way?

People living in many highly developed countries have the ability to file their taxes for free, often after much of the information is already filled out by the government, but millions of Americans still need to fill out forms themselves or pay someone else to do it.

America could learn a thing or two, says Daniel Bunn, vice president of global projects at the Tax Foundation, a right-leaning think tank. “The amount of time and expense that U.S. taxpayers put in the filing process is way beyond what you find normally in other parts of the developed world,” he said.

Bunn thinks pre-filled tax forms can make sense for many taxpayers. Olson thinks taxpayers should be able to download the wage and income information the IRS already has.

For years, Sen. Elizabeth Warren, a progressive Democrat from Massachusetts has been pressing along with others for a “Tax Filing Simplification Act,” which, among other things, would direct the IRS to make “a free, online tax preparation and filing service.”

On a practical note, any pre-populated tax filing program would be another task for the staff- and cash-strapped IRS that’s juggling a backlog of last year’s returns as it processes this year’s returns.

One condition of the Free File program is the IRS commitment to stay out of free tax preparation and let the participating software companies do the work. (That pledge was dropped from the most recent memorandums of understanding for the program, “however, there is no current indication that the IRS intends to enter the market,” the recent FTC lawsuit said.)

But “an IRS-run tax filing system would require substantial investments in web development, technology and data infrastructure as well as technical and administrative services,” said research from Govini, a data analytics firm. The PwC study said even with “relatively optimistic assumptions,” taxpayers in a return-free system would have to wait longer for refunds as the IRS took in and calculated all of their earnings information.

On a deeper level, it could also be too much power and too much complication for the IRS, said Intuit spokesman Rick Heineman. “Already the tax collector, investigator, auditor and enforcer — the IRS also preparing the individual income tax return for every American could reveal a conflict of interest with added burden at tax time on taxpayers,” he said.

When the pre-filled tax information accurately includes undocumented income like cash tips in his experiments, taxpayer compliance goes up compared to the returns they prepare themselves. When it’s missing information, compliance goes down, he found.

Still, in Lawson’s view, “prefilled returns that are implemented effectively and target taxpayers with relatively simple situations — which are the majority of citizens — would be a great boon for American taxpayers.”

Lawson’s seen the missed opportunities for free tax prep up close after his younger sister recent filed her first tax return. “By the way, you qualify for free filing. Make sure you don’t pay,” Lawson remembered telling her. “She said, ‘Oh I wish I had known that. I already paid last week.’”