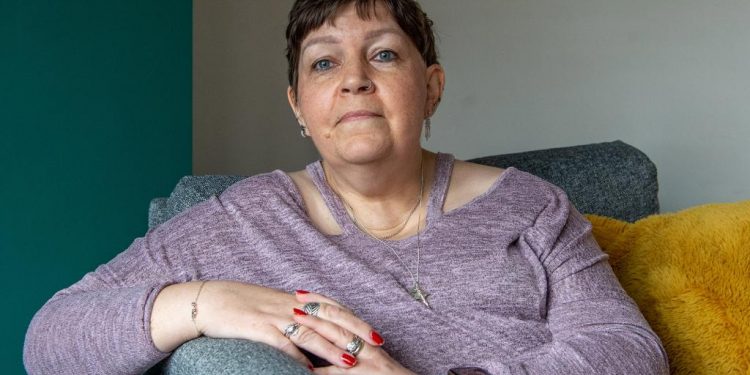 
A woman who broke her spine in two places and shrank by five inches was later told by doctors her back pain was actually an incurable cancer.

Mom-of-two Karen Smith found out she had myeloma and now wants others to spot the symptoms of the rare disease to stop late diagnoses.

Karen, 55, was diagnosed in January 2020 — two months after a fall at work left her struggling to walk and having to sleep propped up in a chair.

The Newcastle mom said she repeatedly visited her GP in utter agony and was told she had “mechanical back pain” from her job in a pharmacy.

The keen gym-goer was sent away with a referral for physiotherapy and advised to take over-the-counter painkillers — but neither improved her condition.

Karen became so desperate she paid to see a private spinal consultant who ordered CT and MRI scans.

Two days later, she was diagnosed with the rare cancer — which tragically kills 3,000 people each year in the UK.

Karen has now teamed up with Myeloma UK to raise awareness about the disease and the impact of a delayed diagnosis on patients’ quality of life.

It is notoriously difficult to detect because symptoms such as pain, easily broken bones, fatigue and recurring infection are often linked to general aging and other conditions.

Karen told StokeonTrentLive: “I felt I was getting worse with the pain and didn’t seem to be standing as upright as normal.

“I was back and forth to the GP; over-the-counter painkillers weren’t making any difference. I was 5ft 5in and I’m now 5ft but no-one noticed.

“I had uncontrollable spasms and couldn’t lie down in bed. I was sleeping propped up in a chair as best I could manage to try to grasp a few hours of sleep.

“I just knew that something wasn’t right and it was getting worse. The pain would come on randomly and take my breath away.

“It was like someone tightening a rope around my ribs and sticking pins in me at the same time.”

Despite the pain she was in, Karen was not sent for an X-ray by her GP surgery and told to keep on taking painkillers.

By the time she was diagnosed, she was found to have two broken vertebrae and a compressed disc and was forced to wear a back brace for four months and use a walker.

Karen underwent chemo and a stem cell transport in March 2021, which she credits with allowing her to walk and drive again.

Life seemed to have returned to normal for the 55-year-old until the end of last year when she felt a sharp pain and heard a loud crack on the left side of her jaw while having lunch.

Tests revealed the cancer had returned, causing her jaw to fracture.

She was put on five sessions of chemo in January this year and is currently undergoing private treatment at a Nuffield hospital in Newcastle and Wolverhampton twice a week.

Treatment has proved highly effective in suppressing the disease, which is incurable, and can lead to patients living beyond five or ten years after their diagnosis.

Opening up about her struggles, Karen said: “I had never heard of myeloma and came back with lots of information when I was diagnosed.

“It is incurable but it is treatable – and I have responded well to treatment and thankfully feel quite well in myself.

“I want people to know about myeloma and spot the signs. If anything doesn’t feel right, please get it checked.

“We need more funding and awareness because it feels like myeloma is a forgotten cancer.”

Myeloma UK Acting Director of Research and Patient Advocacy, Shelagh McKinlay, said: “We cannot allow the lives of patients like Karen to be diminished by avoidable delays in diagnosis.

“The quality of life of people living with myeloma has never been more important, with advances in treatment meaning that patients are now able to live longer than ever before.”

Higherland Surgery said it “cannot comment on individual cases” but added: “We believe the surgery made the appropriate referral to a specialist service in this instance. We have not received a complaint from the patient.”