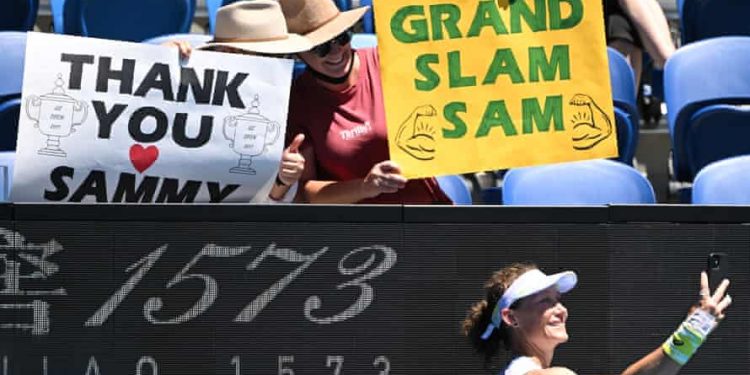 
The Australian Open farewell tour continued longer than expected. Now, having played her encore, Samantha Stosur will leave the stage on a high. This second-round appearance was Stosur’s 797th tour-level singles match, of which she has won more than 450. On Wednesday, Anastasia Pavlyuchenkova ensured there would not be a 798th, the Russian dispatching the Australian veteran 6-2, 6-2.

On a day of upsets in the women’s draw, this was not one of them. The defeat at Kia Arena was emphatic. There was no hint of a comeback similar to that gritty first-round performance against American wildcard Robin Anderson. But even after Pavlyuchenkova broke her serve to take a 5-2 second-set lead and successfully served out the match, Stosur’s smile was unmoving. The occasion, for once, meant more than the tennis.

Stosur played her first professional match at the age of 14. At 17, she contested her first Australian Open. Since then she has climbed all the way to the top, to world No 4 and the 2011 US Open trophy. Now, 20 years later and ranked 487th, she has earned the right to hop off at the bottom.

“I have done more than I ever thought was possible,” she said to a standing ovation, which preceded a dedicated video tribute and presentation from Tennis Australia. “I dreamed of winning a grand slam and doing close to the things I did. To do what I have done dreaming as a little kid is phenomenal. I couldn’t have asked for more. I’ve had many great moments here in Australia and around the world. Yeah, it’s been amazing.”

Pavlyuchenkova too was taken by the moment. “It was actually very emotional for me,” she said. “I had goosebumps when everybody was clapping for Sam. She is such a wonderful human being and also amazing tennis player, so thank you Sam.”

Pressure has forever plagued Stosur at her home slam and positivity has rarely been afforded to the Queenslander, who has never make it past the fourth round and failed to win a single match in five consecutive attempts between 2016 and 2020. Overall, in her previous 19 campaigns, she was knocked out in the first round eight times.

The very fact she made the second round at her 20th – she now equals Lleyton Hewitt’s record for most Australian Open appearances – is testament to the palpable, almost unrecognisable sense of freedom with which she overcame Anderson. It was the first time Stosur had successfully staged an Australian Open comeback after dropping the first set since 2003, when she did so against Spanish star Conchita Martínez.

And so she will walk away from singles as one of the greats of Australian tennis, who beat Serena Williams in the 2011 US Open final, who spent 441 consecutive weeks between 2008 and 2017 as the top-ranked Australian singles player of either gender, and who was a fixture in the world’s top 25 for nine consecutive years.

“Thank you to everyone who has been along with me the 20 years,” she said. “The coaches, they know who they are, they have all helped me in some way on and off the court, shaped me into the person I am. The family – they are all down there now – mum and dad, my brothers for giving up everything early on driving me to tournaments on the weekend, getting dragged along for Sam’s tennis. But I think it was all worth it, so thanks for giving everything you’ve got as well.

“Obviously my partner, thanks Liz, standing by me and getting me through the hard times and also the good times. Little Evie at home, I hope you’re awake, I say hello to you. Everyone on the sideline, I’ve had a great time, thanks for all being here. If I missed anyone I’m sorry, but I love you all.”