“I Had Tears Running Down My Face”: Neil Gaiman on The Ocean at the End of the Lane Stage Play 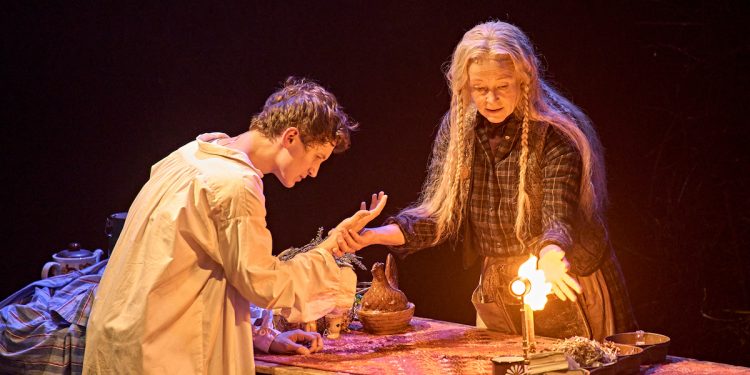 
The one thing they were sure of was giant puppets made of rubbish. That was there from the word go. The puppetry department, the puppet creators and inventors, it was one of the leaders of that team who was the person who first showed the book to Katy and said, “You should do this.” So, the puppetry was intrinsic from the beginning.

But I did think the puppetry, for me, is like everything else in Oceanin that the ragged-edged slightly amorphous nature of it fits with memory and works in a lot of ways. You look at the Deviants in The Eternalsand they’re these elegantly delineated, monstrous creatures, but there’s nothing unknown or unknowable about them. Whereas you look at Skarthach, or you look at the Hunger Birds, and everything about them is unknown and unknowable, but they are terrifying, nonetheless.

Well, one way it differs is that every performance is different. No two audiences are going to ever see the same thing. I remember years ago, the National Theatre of Scotland did The Wolves in the Walls. And for me, the second preview in the Tramway Theatre was the best. It was terrifying and funny.

And then everybody got nervous, and they dialled down the terrifying and all of the things that had been really scary in the second preview. And I kind of understood it- they didn’t want pools of little kid wee on the floor. But there was a level in which that thing that happened that night for me was The Wolves in the Walls. And every other time I’ve seen it, I go, “Oh, it’s good. But that night was special.”

But theatre, I think, is much more malleable. It’s weird because one of the things I love about theatre is you are only making decisions that apply to that performance that night. And when you decide something like casting for film or TV, you are seen as making huge political decisions beyond the ramifications of just, can I find somebody who’s going to give me that thing that I’m looking for? Whereas with theatre, or especially the kind of theatre that that Ocean is, it’s kind of understood. You’re telling a story. You’re telling that story that night, right now, with actors, and it’s okay. And I kind of enjoy that.

7 Components of a Successful 2022 Business Plan

7 Components of a Successful 2022 Business Plan