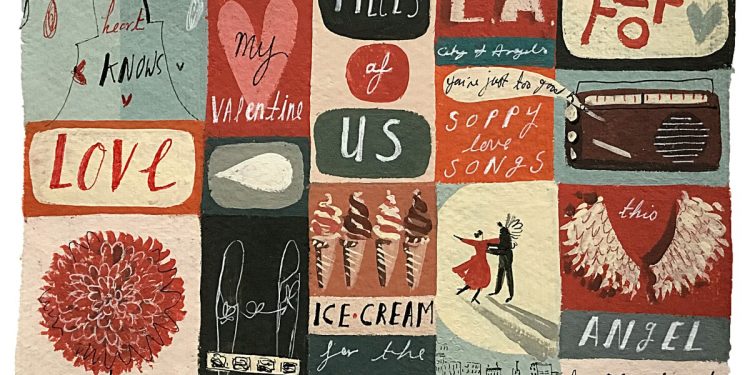 
Valentine’s Day. Ugh. Not a good day for a widow. Everywhere you turn, you are reminded that you are no longer someone’s valentine. And you can’t escape from it. There are the folks hawking bouquets by the side of the road, the sappy tunes on the radio. Then there are all the places you used to go with your partner, reminding you that you are now alone.

Valentine’s Day is a day I keep reminding myself I should just spend somewhere else. Like another planet.

My late husband, Michael, was wonderful about Valentine’s Day — never over the top; he just always did something special. And different.

One year, I was working at a TV production job in a dingy office located over a tattoo parlor in Silver Lake: Michael showed up with a single-stem red dinnerplate dahlia in a small silver vase. As the name suggests, it was massive and beautiful — a single flower, 10 inches across. Everyone in the office smiled. Another year it was red tulips. Some years we just stayed home and cooked something special. Or we took our two kids out for ice cream. Over the years, I bought him books — or goofy socks.

The gift itself didn’t matter. It was what the gift symbolized. There was great comfort in always having a valentine — someone you would choose as your valentine year after year. Michael was handsome and charming and incredibly kind. We were together for 21 years, married for 18, when he dropped dead of a brain aneurysm in 2012.

Last February, I decided to control the Valentine’s Day narrative. I opted for some self-pampering and decided to cash in a gift certificate I had to a spa in K-town. I had been saving it for a special occasion. I write and produce films and TV, and work gig to gig. That means I’m always shaking the trees for what’s next and counting my pennies. I don’t often buy coffee out unless I’m meeting someone about prospective work. Plus, there are those two kids I mentioned — my daughter was about to graduate college, and my son was headed for his freshman year. So I didn’t schedule a scrub or a massage at the spa. The gift certificate would get me in the door for a soak and a sauna, and that would have to do.

Just as I was getting ready to leave for an afternoon of relaxation, I got a call from a guy I’d met on a dating app. We’d gone out a few times, and I already knew he’d never be my future husband. He talked mostly about himself. He was in his 50s but still dressed like a 25-year-old rocker dude. He claimed to have a doctorate degree in physics, even though I couldn’t find anything he’d ever published. He also owned a tech company. (Once, when I asked him why he didn’t include “Dr.” or “PhD” on his business card or his company website, he said it was because it would make people think he’d be too expensive …)

We’d get together once in a while for sushi or a movie but I’d go home alone.

I told him about my spa plans, and how Valentine’s Day was often hard for me. He said he wanted to join. I thought about it. OK. It would be nice to have some company. He arrived late and met me at the spa restaurant.

We shared some laughs, an easy conversation and a nice meal of bulgogi and a way-too-spicy-for-me fried squid. He’d ordered several items — he even had a dessert sent to the table next to us. He bragged that he’d just signed a $64,000 contract that day. After our meal, I thought he would join me in the coed sauna, but he said he needed to go. That’s when I realized I’d been stiffed with the bill. About $85. I’d never be going out with him again.

Even the aaaaah of the spa was short-lived.

I returned home that night feeling angry and lonelier than ever.

And, in a way, perhaps he has been. Many people who have lost a loved one have stories about little moments where it feels like they have received a nod, a message, a sign from the beyond.

The most stunning example of all happened to me last summer as I was preparing to fly back to L.A. after getting our son settled in for his first year at college. As I stood in the airport, waiting to board my flight, I reached for my wedding rings. I’d worn them on a chain around my neck for the trip, and I whispered, “Babe, we did it. Two kids off to college.”

Michael Newman. That was my late husband’s name.

The morning after my spa debacle, I lay in bed charting my day of walking the dogs, calling my kids and other chores, when I spotted something across the bedroom.

Many years earlier, Michael and I had taken some goofy pictures together in a photo booth, the kind you see at an amusement park or at the Santa Monica Pier. The strip of images were some of my favorite pictures of us together, and looking at it always made me smile. But somehow, it had gone MIA. I had looked everywhere for it. I feared it had accidentally fallen into the trash or gotten swept up with a newspaper and tossed somehow.

I had cried. Another piece of us gone.

As I walked across the room that morning, there, resting atop a pair of my shoes, was the picture strip. Seemingly carefully placed.

But how? Not counting my two rescue dogs, I live alone.

Even from another dimension, Michael was still being a good valentine.

This year? I’m trusting my gut.

I’d rather spend Valentine’s Day alone than with any questionable valentines.

Perhaps I’ll even take a last-minute trip out of town.

I can always take the dogs, and the pictures, with me.

The author lives in South Pasadena and writes and produces for TV and film. She is currently in development on a historical fiction project for TV. She is on Instagram @margo.newman.75

L.A. Affairs chronicles the search for romantic love in all its glorious expressions in the L.A. area, and we want to hear your true story. We pay $300 for a published essay. Email LAAffairs@latimes.com. You can find submission guidelines here. You can find past columns here.