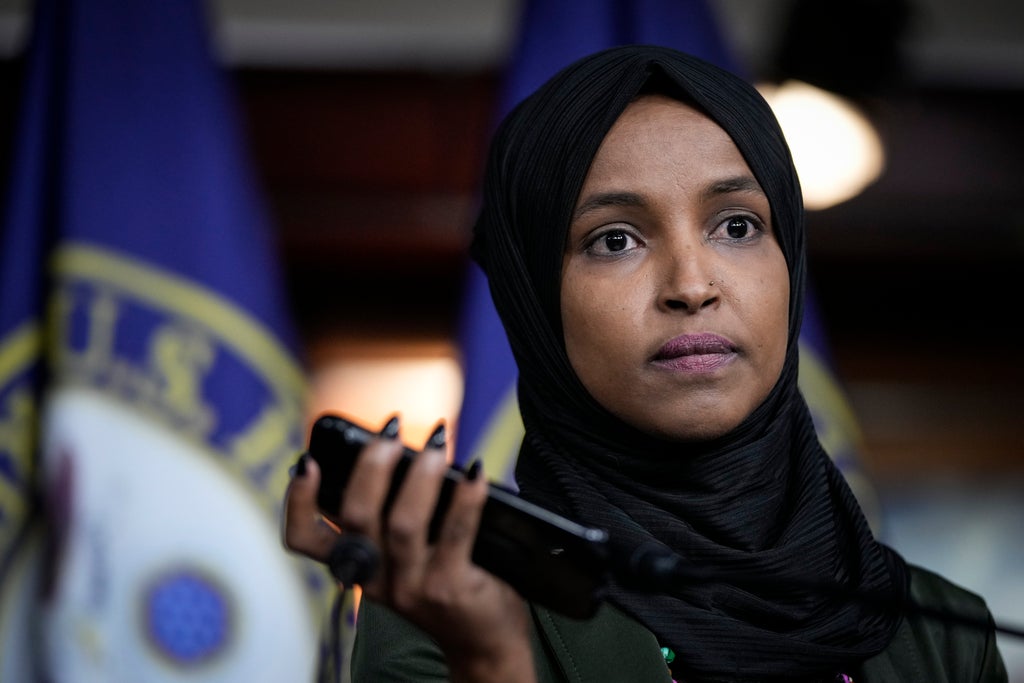 Ms Omar delivered a sharp rebuke to the West Virginia senator in a series of tweets after the shock announcement on Sunday, in which Mr Manchin said he was against the legislation, calling it “bulls***”.

The congresswoman derided the move in one of her tweets as being about the “corruption and self-interest of a coal baron”.

“West Virginia is 50th in public health, 50th in childcare, 48th in employment. They support Build Back Better by a 43 point margin,” she said in a tweet.

“This has nothing to do with his (Manchin’s) constituents. This is about the corruption and self-interest of a coal baron,” she added.

Mr Manchin has long-standing financial ties to the coal industry and West Virginia is a key coal-producing state. A spokesperson has responded to previous coverage of his links to coal by saying Mr Manchin “is and has been in full compliance with Senate ethics and financial disclosure rules”, and said he supports “important climate legislation”.

In another tweet, the congresswoman said: “Let’s be clear: Manchin’s excuse is bulls**t. The people of West Virginia would directly benefit from childcare, pre-Medicare expansion, and long term care, just like Minnesotans. This is exactly what we warned would happen if we separated Build Back Better from infrastructure.”

The senator’s withdrawal has left many Democrats and the White House fuming, with the latter accusing the West Virginia senator of “lying” and breaching the trust of his own party.

A moderate Democrat in his politics, Mr Manchin said he would find a common ground to help pass the crucial domestic investment bill.

Mr Manchin had announced his decision on Fox News, where he said: “I cannot vote to continue with this piece of legislation. I just can’t. I have tried everything humanly possible.”

He later released a statement in which he cited “serious reservations” and his concerns about the US’s debt behind his inability to back the “mammoth piece of legislation”.

“My Democratic colleagues in Washington are determined to dramatically reshape our society in a way that leaves our country even more vulnerable to the threats we face,” the senator said.

“I cannot take that risk with a staggering debt of more than $29 trillion and inflation taxes that are real and harmful to every hard-working American at the gasoline pumps, grocery stores and utility bills with no end in sight,” he added in the statement.

The White House responded sharply to the senator’s decision to back out on live television and not inform the president’s office prior to making the public announcement.

“Senator Manchin’s comments this morning on Fox are at odds with his discussions this week with the president, with White House staff, and with his own public utterances,” White House press secretary Jen Psaki said.

“Maybe Senator Manchin can explain to the millions of children who have been lifted out of poverty, in part due to the Child Tax Credit, why he wants to end a programme that is helping achieve this milestone — we cannot.”

President Biden’s administration will find a way to move forward with the legislation in 2022, Ms Psaki said.

Touted to be a milestone legislation by the federal administration that would serve millions, the Build Back Better Act aimed to raise the tax ceiling on wealthier Americans and corporations to finance major programmes aimed at easing the climate crisis, boosting healthcare subsidies and providing free childcare.

“We will have a lot of explaining to do to the people of West Virginia to tell him he doesn’t have the guts to take on the drug companies to lower the cost of prescription drugs,” he told CNN.

“He is going to have to tell the people of West Virginia why he rejects what the scientists of the world are telling us that we have to act boldly and transform our energy system to protect future generations from the devastation of climate change,” the senator added.

So, You Want to Take Your Broker to Court

cryptocurrencies: Great Expectations: What the Indian crypto industry is hoping for in Budget 2023