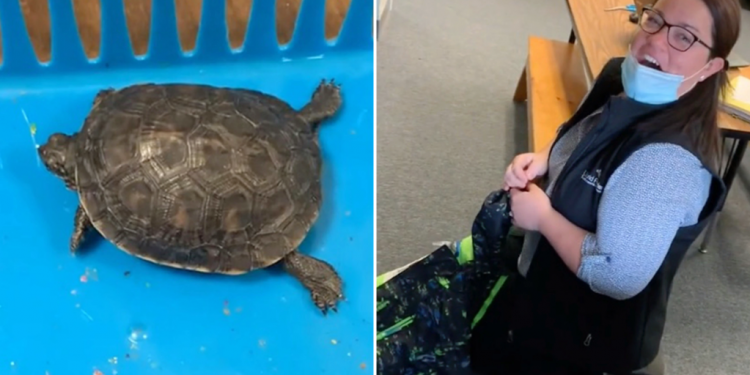 
A teacher was left horrified after hearing a scratching noise coming from one of her pupil’s backpacks — only to discover a live animal.

A video shows the woman rooting through the bags to find the source of the rustling and her shocked reaction.

She wrote on the video: “While the kids were at gym, my coteacher and I were working silently on computers.

“We heard scratching sounds over and over so we had to investigate all the backpacks.”

The woman off camera can be heard exclaiming: “I think it’s a live turtle. Look in the back part of his backpack.”

The shocked teacher looking through the bags replies: “No!”

The woman filming zooms in on the turtle and says: “The poor thing. Why is it in there? Oh my god! What do we do?”

In the clip, another teacher comes in to remove it from the back and laughs saying the little boy had spoken to her about the turtle “for about half an hour,” but she hadn’t realized he actually had it in his bag.

Many people were shocked at the clip, with one saying: “My child will do this one day. I just know it.”

Another added: “Meanwhile mom is back at home freaking out trying to figure out what she’s going to tell her kid because she can’t find the turtle.”