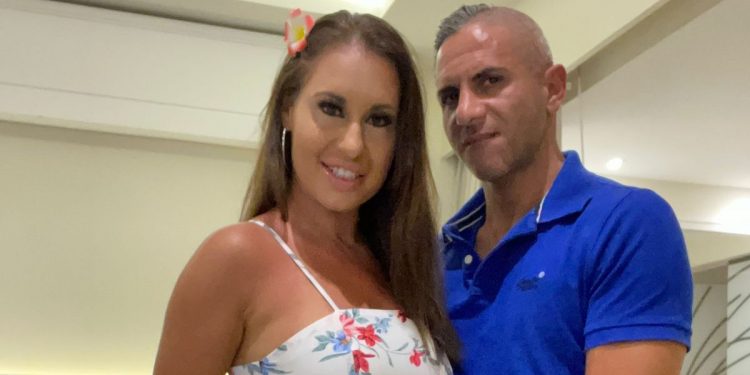 
Adult stars and OnlyFans creators Demetri Simstud and Jess West have been in a relationship for eight years.

But despite working in the same field, the pair get polar opposite reactions in public.

“It is a completely different dynamic between male and female performers,” Demetri, 49, acknowledged in a chat with Daily Star.

“With the guys you are looked upon as a hero and a legend because you sleep with beautiful women for a job.

“I’ve not had bad experiences with fans or the general public.”

But he added: “With the girls they will get hate on a daily basis, they are called slags and they get asked whether their parents are proud.

“In the 20 years I’ve been doing this job I’ve never had an email or a tweet or any kind of interaction asking are my parents proud of me.

“I know it’s double standards but that is what it is like.”

This was also emphasised by Jess, 35, who last month told Daily Star how she was mortified after a stag party played her X-rated videos on a plane with kids on board.

And Demetri said Jess was treated like a “second class citizen” when the pair visited Greece together.

Demetri is a Londoner but has a Greek family background – making him a popular performer there.

And he said: “I took Jess over on one occasion. People would stop me in the street and ask for pictures and they were really interested.

“She couldn’t believe the positive reaction I was getting for my day to day job.

“It struck her how crazy the reception I was getting compared to the one she gets on a daily.

“Even in Greece where I’m considered a hero, someone would come over and they’d stick a phone camera in her face and say, ‘Oh do you mind taking a picture with me and Demetri?’

“It was like she was a second class citizen straight away and the guys were all saying how they wanted to be like me and what I do is great. It can get to the point where it’s quite rude.”

He added: “It is all positive from my perspective but being with a female in this industry I have got to see a huge contrast between the two reactions 100%.

“It is not that Jess gets all bad but the hate is palatable sometimes.”

Jess herself said: “It’s crazy because he’s perceived as a legend whereas I’m a slag.

“That’s the reaction we both get even though we do the same thing.”

Demetri is a former banking analyst who got into the industry when he lost his job after 9/11.

You can read part one of our interview with him here – where he explains why the dramatic career change led to his dad calling hima prostitute while his mum is proud of him.

Referring to his dad, who passed away of cancer before Demetri became a successful adult entertainer, he said: “He was unimpressed and he told mum it was just a phase but he had no malice towards the end of his life.

“He thought it was like being a male prostitute and he told me I had a degree and I had banking and people would die for that.

“He thought I was selling my body but he didn’t realise that not everyone can do what I do.”