I’m loving Lego Star Wars, but what it really makes me long for is a Lego Dimensions reissue 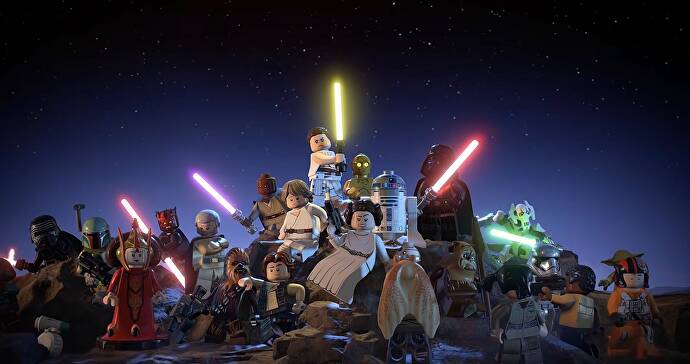 
It’s been a while since I’ve played one of the ‘traditional’ Lego video games. Before the excellent Lego Star Wars: The Skywalker Saga, I’d not played a ‘pure’ one of these games in-depth since the first Lego Indiana Jones, even though I had minor flirtations with various Lego adventures over the many years since. I loved Lego Builder’s Journey and Lego City Undercover, too – but they’re different things.

Basically, it’s been a while. That fact has really enhanced my enjoyment of The Skywalker Saga, which is just a brilliant game, full of heart and jam-packed with content. Even now, when I feel less excited about Star Wars than perhaps at any other point in my life (cheers JJ), this game continues to thrill. But it’s also reminding me of something else…

I really miss Lego Dimensions. A late arrival to the toys-to-life video game craze that was kicked off by Skylanders, which itself was inspired by the trend of including bits of plastic tat with video games, it was brilliant. But not because of the toys.

I don’t say that because I don’t want Lego, either. I’ve got a house full of the damn stuff. But the stuff you had to build for Dimensions was so basic that it was practically completely uninteresting, aside from unique minifigures of classic characters.

What was exciting about Dimensions was the cross-over aspect of it. This was a Lego game that had all of the fun and heart of Lego Star Wars, but it featured a wide range of intellectual properties – Ghostbusters, Lord of the Rings, The Simpsons, Sonic the Hedgehog, Doctor Who, and Scooby Doo – to name a few. It was thrilling to see these worlds, many of which couldn’t justify a single stand-alone Lego game of their own, get the same sort of treatment in the form of bite-sized level packs.

The toys were a decent money-spinner, and I can also see why kids were attracted to them. I do have a shelf full of amiibo, after all. But the truth is, this game never needed the toys. The magic of tapping a character to the portal to unlock content wasn’t the real magic of Dimensions. The real joy was of seeing a bunch of different universes rendered with all the joy and fun of these Lego titles that are usually restricted to single franchises. Many of these levels were shockingly well-produced; I remember the Sonic and Doctor Who packs being particularly excellent, packed with fun references and unique mechanics.

So, yes. I don’t know what Warner Bros. and Lego game steward Traveler’s Tales has planned next – probably a ‘complete Saga’ style release around Harry Potter or Indiana Jones – but what I’d really love to see is a revival of Dimensions. Toys to Life might not be the hot gimmick any more, but Dimensions was a strong enough game that you could strip away the toys and sell piecemeal DLC that gradually adds more characters and franchises to the game and have it be just as attractive.

It’s unlikely to happen, but I’d love to see that Dimension-hopping adventure return – not only with the remastered content from before, but with all-new characters and levels. The Skywalker Saga feels like a perfection of a formula that’s been built over many years – and the only thing that could make that better is a wider range of multi-franchise content. That’s what Dimensions was, and why it remains my favourite of the Lego games. Bring it back.