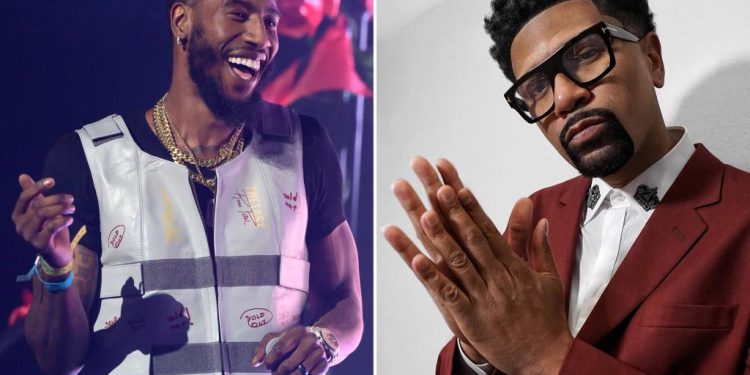 When you’re a professional athlete, people want to put you in a box. But my “Renaissance Man” guest this week is that Christmas present that is almost impossible to wrap because it has so many angles and sides.

We’ve watched the shooting guard win an NBA championship with the Cavaliers and a Mirrorball trophy on “Dancing With the Stars.” (Yes, he can ball and ballroom. And yes I voted for him.) Iman is also a rapper, a reality star and unabashed family man.

Growing up outside Chicago, he noted that his entire life he was told, “Don’t put all your eggs in one basket. What if you don’t make it to the NBA?” So he internalized this and made sure he had more going for him than just hoops. It’s been a blessing and sometimes a curse.

When he made it to the NBA, he and his wife, Teyana Taylor, also had a reality show, “Teyana & Iman,” when it was a little frowned upon in the league. (You can thank the Kardashians for that sentiment.) He’s rapped when maybe it’s not the best way to endear yourself to team execs. But he’s done it his way and he’s been successful. Now at 31, he’s had his fair share of injuries that have sidelined him but he’s still working out because he’s eager to return to the league. Iman is a player like Patrick Beverly. He’s tough and while his game doesn’t always register on the stat sheet, he does intangibles that make the difference.

He’s also been in the studio, making music and is joining the upcoming “Dancing With the Stars” tour.

Growing up with two older brothers, he’s always had thick skin and the knowledge that forward momentum is paramount.

He credits his blue collar upbringing, a strong nuclear family with a mom, dad and grandmother in the house, who made sacrifices for him and his brothers.

“I’ve got a tremendous support system with my family, like I’ve had my father there. I had my mother. But a lot of people don’t have this advantage,” he said of having a father.

Iman, who has two daughters, Junie and Rue Rose, has made fatherhood central to his identity. He learned the ropes from his dad, with whom he had an online cooking show, and also from a teammate — LeBron James. The current Laker “knocks himself off of a pedestal to be at every kid’s game,” said Iman, adding that he measures a man by how they are with their children and LeBron set the standard in the business.

“Being able to see his mannerisms that they want to do his handshakes with him. The way
they joke … The only time he breaks focus is to light up with a smile because his kids
are on the sideline,” he said adding that they’ve always been encouraged to bring their family along for the ride. “LeBron is always preaching it.”

He said LeBron also shares information and intelligence he’s learned throughout the years in the league. But he does have some dubious, but healthy, eating habits, which help him maintain his 37-year-old body while competing against much younger athletes.

“Watching him drink water and eat stuff that I laughed at all the time. I laughed at it. You know what I’m saying? Like, I don’t think that, you know, I tearing my ACL because I don’t eat like LeBron. But I’m just saying, I sat here, watch this man eat stuff that I’m like, ‘Bro are you going to be full for the day? What is that?’ And he just like, ‘No, because I got to do this, this and this and this’ … Whatever he was doing, the faithfulness that he had to that regimen … that is what needs to be applauded. This is who he is.”

As for wife Teyana, who can sing, act and dance, he gives some insight into her routine. And her killer abs.

“She don’t work out and she don’t eat like LeBron,” he said, adding that her genetics are insane. Her only fitness is dancing.

But the pair are a true power couple, and that was cemented by their reality show, which gave him pause initially.

“With the reality show, I realized when I went into it, I was probably the little negative Nancy. I didn’t know how to feel about it … I was still on a team when I was first trying to film it, and I was like, I get it, but I don’t get it … And I think the first time I got to see it unravel and see the episodes … Because by the time I see it, when it comes out, it already is being edited. So my daughter is like a year older by the time I see it. And as I’m watching it, I’m seeing her growth. I’m seeing little things that just because she’s wearing a microphone and I might not be there right then and there. But now I’m seeing her behavior when I’m not around and I’m seeing her thoughts.”

But the biggest thing he hopes comes across is that he and his wife aren’t perfect and they’re stumbling through life like the rest of us.

Trump news today: Ex-president says he ‘probably wouldn’t have any interest’ in returning to Twitter