India is heading for a showdown with Joe Biden’s administration after announcing one of the world’s toughest taxes on foreign technology companies.

Narendra Modi’s government this month announced several amendments to a 2 per cent “equalisation levy” on digital services, introduced in April last year, which analysts said amounted to an expansion of the tax.

The measure, which applies to everything from ecommerce to video streaming, follows a similar 6 per cent levy on digital advertising from 2016, known as the “Google tax”.

The latest levy is one of several examples of bold but contentious steps New Delhi has taken to assert control over US tech companies. These range from a strict data protection bill making its way through parliament to efforts to regulate content on social media platforms such as Twitter.

But India’s new equalisation levy risks a trade dispute with the US, which in the final days of the Trump administration was labelled “discrimination in its clearest form”. The new levy raises the prospect of retaliatory action and threatens to derail efforts under Biden to improve trade ties that had soured over everything from agriculture to Harley-Davidsons.

If the equalisation levy was not imposed at all, India wouldn’t have the ability to bargain that it has now

“It feels like I’m watching a thriller. Every couple of weeks there’s a turn,” said Suranjali Tandon, an assistant professor at the government-backed National Institute of Public Finance and Policy.

India’s levy comes as governments across the world scrutinise the role of Big Tech in their societies, such as their sway over news media and the amount of the taxes they pay.

New Delhi was an early and aggressive proponent of levies aimed at companies such as Facebook and Google, which were criticised for doing ample business in the country but paying limited tax thanks to their offshore structures.

Frustrated by the slow progress made at the OECD to develop a global model for taxing tech, New Delhi forged ahead. Several other countries such as the UK, France and Italy have also pursued their own digital service taxes.

“You can look at it as a way of raising revenue and getting rid of the problem, or bringing everyone to the table to talk on your terms,” Tandon said. “It does the latter well enough. If the equalisation levy was not imposed at all, India wouldn’t have the ability to bargain that it has now.”

The US Trade Representative, which investigated the digital taxes of multiple nations, said India’s equalisation levy was broader in scope than those elsewhere. It said 86 of 119 companies that would probably have to pay the levy were American, which would lead to millions of dollars in compliance costs for individual businesses.

Analysts are unsure whether Biden will follow through on the tough stance taken by Trump, who floated a 25 per cent levy against French luxury imports in retaliation for its digital tax.

Nagappan said that the equalisation levy’s broad scope and low threshold — companies with annual revenues of Rs20m ($275,000) and above are taxable — could turn smaller businesses off India altogether.

“These are the types of companies who will not go to court,” he said. “They will simply not come to India.”

India has recently sought to shift the balance of power with Silicon Valley. It is in a stand-off with Twitter, for example, over the platform’s reluctance to comply with demands that it take down content connected to recent farmer protests.

For India, ensuring that foreign tech companies pay more taxes is an urgent task. With its 1.4bn population, rising incomes and wide adoption of smartphones, business for everything from ecommerce to cloud services is booming.

But the country struggles with a chronically low tax base, a challenge that has only intensified as the coronavirus pandemic led to a severe revenue shortfall. 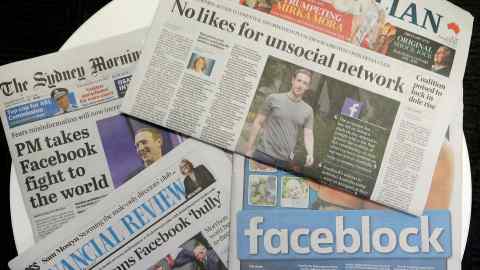 Authorities collected almost Rs15bn from the equalisation levy between April and the end of January, the government said, up from only Rs3.4bn in the year after it was introduced in 2016.

Mukesh Butani, managing partner at law firm BMR Legal, said that from the government’s perspective the rationale for the equalisation levy was “very simple”.

“You’re undertaking an economic activity,” he said. “You may not have a physical presence. But you have an economic nexus because you’re transacting with my citizens.”

But India’s approach on digital tax risks reinforcing its reputation as a difficult place to do business, the product of years-long disputes with companies such as Vodafone and Cairn Energy over levies it sought retrospectively.

India in 2018 also bolstered its pursuit of offshore tech companies by holding that any company with a “significant economic presence” in India, rather than a physical presence, would face local taxes. Most western companies, however, are shielded from the provision for now thanks to bilateral tax treaties.

Analysts are divided over whether India’s gamble will pay off. Ashish Goel, a lawyer at India’s Supreme Court, said it could ultimately help India push for better tax terms on the global stage.

“We cannot keep on waiting,” he said. “There should be a solution which is friendlier to developing countries and not just developed countries.”

A strike against global warming or a Big Ag giveaway?