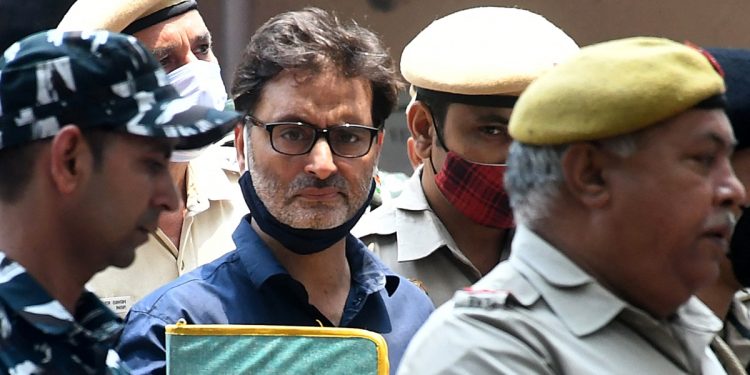 Malik, one of Indian-administered Kashmir’s prominent rebel leaders, is the chief of now banned Jammu and Kashmir Liberation Front (JKLF). The group renounced violence in 1994.

The court prosecutor had sought the death penalty for Malik, who has pleaded guilty to all charges.

The People’s Alliance for Gupkar Declaration (PAGD), a coalition of pro-India parties in the region, termed Malik’s life imprisonment as “unfortunate”.

“Life imprisonment given to Yasin Malik is unfortunate and a setback to the efforts for peace. We are afraid that this will further compound the uncertainties in the region and will only fuel more alienation and separatist feelings,” the group said in a statement on Wednesday.

The “… court has delivered its verdict but not justice,” the statement said.

The mobile internet services in some parts of the region’s main city of Srinagar were suspended soon after the verdict was announced by the anti-terrorism court based in the Indian capital New Delhi.

Pakistan has condemned Malik’s “malafide” conviction and sentencing on “a grossly suspicious and contrived case”.

“The abhorrent Indian attempts seeking to defile the legitimate struggle of the Kashmiris for their right to self-determination as ‘terrorism’ only substantiate India’s deeply etched credentials as a ‘serial violator’ of human rights and usurper of the fundamental freedoms of the Kashmiris,” Pakistan’s foreign ministry said in a statement.

During the trial, which Malik’s family and lawyers alleged was not fair, the Kashmiri leader rejected the charges and said he was a freedom fighter.

Malik was arrested by the NIA in a “terror-funding case” shortly after the JKLF was banned in 2019.

The agency charged him with receiving funds “from Pakistan to carry out terrorist activities and stone-pelting during the Kashmir unrest, especially in 2010 and 2016”.

The move was followed by months of military and communications lockdown in the region and arrests of major political and rebel leaders.

In several areas of the disputed region’s main city of Srinagar, shopkeepers downed their shutters before the pronouncement of the sentencing against Malik.

Dozens of women protested at Malik’s home in Maisuma in advance of the verdict, shouting slogans: “Ye tamasha nahi hai, ye maatam sahi hai” (This is not a spectacle, this grief is a reality).

Protests were reported in some areas of Srinagar as security forces in riot gear patrolled the streets.

After the sentencing was announced, Malik’s family members told Al Jazeera they were “shattered but not able to utter a word”.

“He has rested his case with God,” said one of Malik’s relatives, who did not want to be identified fearing reprisals from the government.

Outside the residence of #YasinMalik, shops commercial establishments remain shut ahead of the judgement against #Jammu and #Kashmir Liberation Front leader.
Heavy presence of armed police. pic.twitter.com/wgqPtPJv5G

Originally founded in the 1970s, the JKLF under Malik repeatedly called for the independence of Indian-administered Kashmir from both India and Pakistan, who rule over parts of the Himalayan territory but claim it in its entirety.

The two nuclear-armed nations have fought two of their three full-scale wars over the territory. India accuses Pakistan of backing the armed rebellion in Indian-administered Kashmir. Islamabad denies the allegation, saying it only offers diplomatic and moral support to the rebels.

In a tweet on Tuesday, Pakistani Foreign Minister Bilawal Bhutto-Zardari demanded Malik’s acquittal. “The fabricated charges against him must be dropped. He must be released forthwith and allowed to reunite with his family,” he posted.

In 1988, Malik was one of the first Kashmiri rebels to cross the border to Pakistan to receive training for an armed rebellion against New Delhi’s rule that began in Indian-administered Kashmir the next year.

A Kashmiri political commentator described Malik as “a saner voice among the separatists” and said his sentencing was a “major setback to separatist politics” in the region.

“He did not shun dialogue. Many hardline groups would deride and laugh at his image as a Gandhian. But Malik continued with his Gandhian ideals and has entered into talks with both India and Pakistan for the resolution of Kashmir issue,” the commentator, who did not want to be identified, told Al Jazeera.