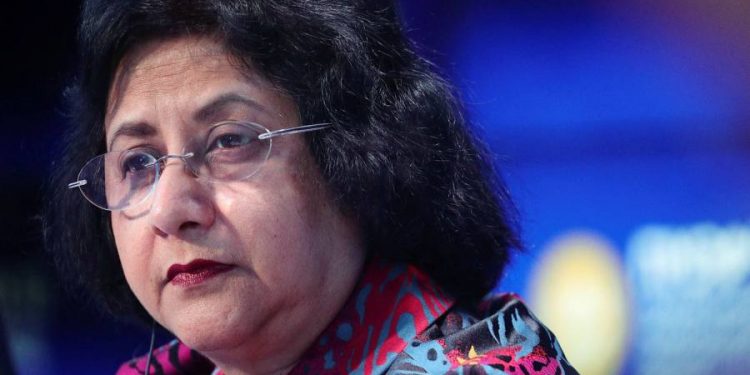 
The India chief executive of software giant Salesforce said the country’s IT sector is grappling with a skills shortage “crisis”, as companies struggle to meet surging demand and compete with well-funded tech start-ups for workers.

The shortage is challenging India’s IT companies, which serve as the foundation of the country’s services industry and as back offices to the world’s biggest companies, including Citibank UK, Microsoft and AstraZeneca.

Arundhati Bhattacharya, Salesforce India chief executive, said that her company was rushing to hire and train staff, after the pandemic had driven up demand as companies have embraced online working and services.

“We are doing certain stop-gap measures, but there is definitely a skills shortage,” said Bhattacharya, a former chair of the State Bank of India who joined the San Francisco-headquartered software company in 2020.

“We are doing a number of things which we feel . . . in the medium term will solve our issues. And it’s not only us, the entire IT sector is doing [it],” Bhattacharya said in an interview with the Financial Times. “In the shorter term, however, there is a crisis.”

According to data compiled by Xpheno, a specialist staffing company, the number of active job openings in India’s IT sector reached a two-year high of 129,000 in January, almost double the 68,000 registered in January last year.

The root cause of the shortages predates the pandemic. “In 2018 and 2019 we had relatively a lesser intake” of new graduates, said Kamal Karanth, Xpheno co-founder.

Churn in the sector, which now employs about 5mn people and generated $227bn in revenue for India’s 2022 financial year, had shot up, said experts.

During the pandemic, IT companies have slashed their workforces to cut costs. Yet “demand for digital skills hit an all-time high”, said Karanth.

According to InterviewBit, a company that helps IT job candidates in India prepare for interviews, software development engineers command an average annual base salary of Rs1,191,752 (about $16,000), rising to Rs2,225,470 with experience.

But at the lower end of the skills scale, the average yearly salary for a technical support engineer is Rs300,000 according to jobseekers site AmbitionBox.

Tech companies are responding with massive hiring drives. Milind Lakkad, head of human resources at Tata Consultancy Services, India’s second-largest listed company by market capitalisation, said during an earnings call that TCS had hired 77,000 new graduates in nine months. The “unprecedented volumes of hiring” brought the company’s workforce to more than half a million employees.

On a smaller scale, Salesforce India has expanded from 2,500 employees when Bhattacharya was appointed to 6,500.

“We are talking to colleges. We are also establishing relationships with companies that will actually go into [smaller] cities, and pick out the bright guys or girls,” added Bhattacharya. “We are on the verge of creating another programme for women to return to the workforce.”

How to Do Chair Yoga