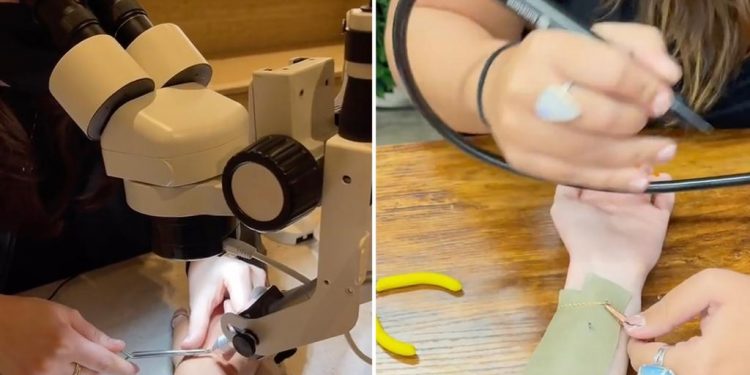 Welded-on bracelets and other forms of permanent jewelry are being touted as a growing, glamorous alternative to tattoos and piercings — not to mention a really cute way to commemorate friendship.

“I got a bracelet permanently welded on my wrist, again,” Forbes narrates over a TikTok shared Monday. “Now there’s two. Let me show you the process because I know it sounds kind of crazy.”

The trend is apparently growing among well-followed fashionistas on TikTok — among them Forbes, Victoria Jameson and Vienna Skye — where the hashtags #permanentjewelry and #permanentbracelet boast a combined total of 160 million views.

The lineup of chains available at Sparks Studio’s Toronto location — along with several other independent designers offering a similar service — are usually dainty yet casual enough to wear daily and great for stacking, as Forbes demonstrates on her second trip to get bracelets welded on her wrist.

The video shows Forbes and a friend choosing chains and then having them fitted for the perfect length.

“I’m pretty particular about the fit,” added Forbes, whose videos on her permanent pieces have drawn millions of views. A jewelry welder then peers through “magnifying goggles” as they use a handled “microlaser which zaps [each end] together.”

“It is not painful,” she reassures skeptical viewers. “You don’t feel it. It doesn’t zap your actual skin.”

However, her caption does suggest that the trend has been polarizing among followers: “You’ll either love it or hate it: A PERMANENT BRACELET!!?”

Folks in the comments certainly came with the tough questions, with one asking, “How do you take them off?”

“You don’t,” concluded one viewer, while another suggested “wire cutters.”

Others pointed out the many scenarios in which one might find themselves required to break their bijou.

“Wait what do u do if u do sports,” asked one curious commenter.

Meanwhile, someone reportedly preparing for a career in health care noted: “I’m in medical school and you can’t have any bracelets on in the OR :(“

The committed look isn’t necessarily for everyone, but for those concerned about breakage, Spark Studio and others do offer repairs — for a fee.

Mobile phone users do not have an increased risk of brain tumours, new study finds

Mobile phone users do not have an increased risk of brain tumours, new study finds