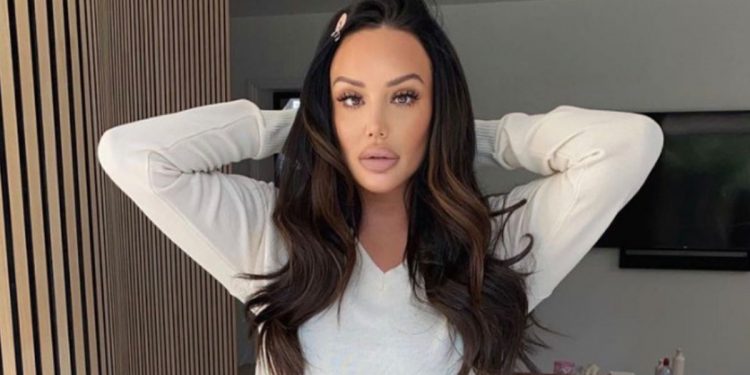 Charlotte Crosby has finally found her happy ever after with boyfriend Jake Ankers as the pair are set to become parents for the first time.

The former Geordie Shore star, 31, shared the exciting news on her Instagram last night, in an emotional post with her fans.

She wrote: “A moment I wasn’t sure would ever be mine Is here, it’s mine (and Jakes) and I couldn’t be happier to be sharing it with you all……I’m having a baby.”

The reality star’s love life has been very public since she found fame on MTV’s Geordie Shore.

And her journey to finding The One has been a rollercoaster.

From her wild Geordie Shore days with ex Gary Beadle to her very turbulent romance with Stephen Bear – here’s a look at Charlotte’s love history.

Charlotte Crosby is pregnant with her first child
(

Charlotte went through a lot with Gary, AKA Gaz, when they dated.

They had an on/off relationship from 2015, but broke up for good in 2016 after she found out Gary had cheated on her with other women – including Jemma Lucy – while filming for Ex On The Beach.

To add to the heartbreak, Charlotte suffered an ectopic pregnancy while he was in Thailand.

The TV star felt upset at the time, as she later spoke out about how much she needed him during the distressing moment, which caused them to fall out.

Charlotte said at the time: “You want them to be like, ‘I need to leave this show now, I want to get on the first flight home and be by the side of the girl that I apparently care so much about’… but that just never happened.”

Following their split, Gary went on to marry Emma McVey – who he shares two children with. The couple have Chester and Primrose together.

Just last year, Charlotte branded Gary as “toxic” and the “worst boyfriend ever”.

Speaking to her mum Letitia on her podcast Vibrators and Values, she said: “A lot of people who are listening to this would class Gary as a boyfriend, even though he never was.

She added: “I will say now, it sounds so strange to even say this because it’s like crazy even re-talking about everything that he did and how he handled the whole situation.

“I don’t even know how I can even say this. I haven’t forgiven him, but it kind of is what it is and I don’t hold a grudge against him anymore.”

“Obviously now, five years later, we have spoken a few times,” she went on.

“As stupid as it sounds, it would be nice to be friends probably again.”

Charlotte and Mitch were briefly dating for around four months before they split in 2015.

The pair got serious very quickly and even met each other’s parents.

Charlotte even got his initials tattooed on her arm while they were together.

But things didn’t last long as they split just before they were due to move in together.

In the summer of 2016, Charlotte met her boyfriend Ash – who she was with for around six months until they called it quits.

The couple were pictured on a string of dates during their time together and even enjoyed a holiday in Ibiza.

But not long after, they went their separate ways.

Ash unfollowed the Geordie babe on Instagram and Twitter, leaving fans to believe they had called it a day on their relationship.

A reason for their split was never shared, but Ash did share a cryptic message on Twitter about people who ‘constantly disrespect you’ at the time.

Ash wrote: “If someone purposely, constantly disrespects you, they aren’t a good person. Simple.”

Charlotte and fellow reality star Stephen confirmed their romance in February 2017 after much speculation they were dating.

It was reported the pair’s relationship got serious very quickly as they discussed marriage and kids together – but it never got that far.

They went through a lot, with claims Stephen had cheated on her during a clubbing night out bringing their romance to an end. They were only together for six months.

In August 2017, the pair had a shaky moment when Charlotte sobbed on Snapchat about loving Bear “so much” but feeling she wasn’t what he wanted and saying they had split.

She was crying on Snapchat
(

She apologised the next day for being a “drunk d***” and explaining they hadn’t actually broken up. All the while, Bear stayed silent.

Then came the devastating blow that Charlotte’s ex Gary was expecting a baby with Emma.

She was in Dublin when the news broke and sobbed on breakfast show Ireland AM about how hard she found the situation, adding that she and Bear had also had a tough week but were “solid”.

But Bear dealt the final blow the following night, having jetted off to Vegas for the Mayweather/McGregor fight.

He tweeted to confirm they had split after a “good run”, adding that they weren’t “right for each other”.

Charlotte moved on from Stephen with Love Island’s Joshua.

The pair met as her turbulent relationship with Just Tattoo Of Us co-star Stephen was coming to an end.

Many believed the couple were in it for the long haul – especially after she moved to Bolton to live with the hunk.

In November 2019, Charlotte announced their split on social media.

The pair have had many blazing rows
(

“Me and Josh have decided to part ways,” she wrote.

Charlotte added: “Sadly the relationship seems to have broken drown. Hoping we can still remain civil and wish him the best for the future.”

Although a reason for their split was never confirmed, the pair remain civil.

Fans guessed the reason for their break-up – and one common theme highlighted their blazing rows that saw accusations of domestic violence thrown at Charlotte – which she denied.

Charlotte and Joshua split in 2019

Others thought the move from her hometown of Newcastle to Bolton was too much for the star.

On Celebs Go Dating, Charlotte told Anna Williamson: “It’s a big deal and sometimes I don’t think he (Josh) recognises how much a big deal it is. I am moving away from everyone I love.”

During a stint in the South African jungle on I’m A Celebrity… Get Me Out Of Here!, Charlotte met boyfriend Ryan.

The couple enjoyed a whirlwind romance after meeting on the show.

But once, they were out, Ryan explained “reality hit pretty quickly”.

They dated during their time on the show
(

He told NW magazine: “Everything is obviously so isolated in the jungle and all of your emotions run at a high.

“While we were great in there, when we got out reality hit pretty quickly. It was clear it was never going to work.

“We are two very different people who also live on the opposite sides of the the earth.”

He finished by saying he wishes Charlotte all the best.

She later added to Ten Daily: “When me and Ryan came out of the jungle I made no secret that I had been in a very long relationship and wasn’t ready to jump into another one.

“I still wasn’t looking for something serious, he’s at a stage in his life where he is – so we came to a mutual decision that we’d just cool it off.”

She met Liam in Dubai
(

Charlotte and Liam met in early 2020, before the coronavirus lockdown, during a holiday in the UAE.

They hit it off pretty quickly while the reality star was enjoying a getaway with the Geordie Shore girls.

The pair were together throughout the lockdown – but went their separate ways after the Sunderland-born star decided enough was enough.

A source close Charlotte told The Sun that the reality TV star had found the relationship “different” after Covid restrictions were lifted.

The source said: “They did seem like the perfect couple and after they met in February last year they were head-over-heels in love.

“But like so many other couples, their relationship was born – and evolved – during lockdown which meant they were always together and life was pretty easy.

They were together during the lockdown
(

“Now the world has opened up again and it’s become pretty clear they are different people with different goals.”

Charlotte reportedly booted Liam out of her Newcastle pad following the split.

In October, a source claimed the pair were getting very serious towards the end of their relationship.

“They were talking about babies and the future but now Charlotte just wants to have fun.”

After going public with her relationship recently, Charlotte announced she is expecting her first child with businessman Jake.

She’s been dating Jake since last year, after she split from Liam in August.

Charlotte has been keeping her new romance under wraps, despite reportedly moving into her boyfriend’s flat in Manchester, but she took to social media in recent days to give her fans a quick glimpse of her beau.

The star was in tears over the news
(

She shared a black-and-white video on TikTok and Instagram of her mouthing song lyrics while sitting close to Jake with her forehead touching his.

Charlotte also revealed they’ve been together for seven months, meaning they began dating shortly after her split from Liam, and she said it felt like it had been longer because of “the amount of stuff we’ve already experienced together”.

The couple have taken their relationship to the next level as they are now going to be parents.

Charlotte recalled how she thought “f**k, I’m not gonna be able to have kids” after she nearly died when doctors discovered she had been internally bleeding for a week after her fallopian tube was split open and had to remove right fallopian tube and ovary.

In the pregnancy announcement video, Charlotte broke down in tears as she shared her exciting news with her mother Letitia, while her dad told Jake he had “never seen my daughter so happy”.