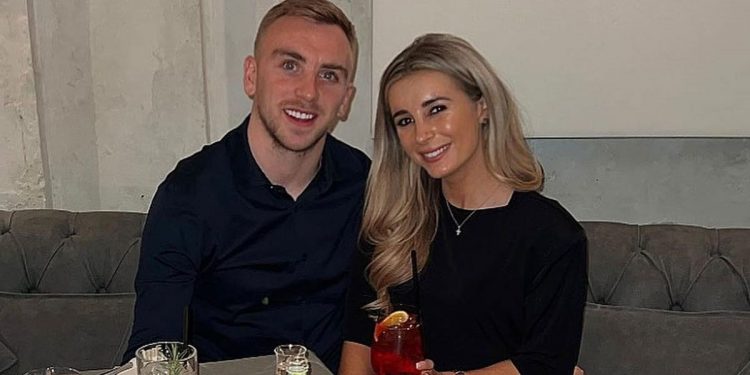 
Dani Dyer jetted off to Milan with her footballer boyfriend Jarrod Bowen as they enjoyed a few days at the £6k-a-night Bulgari hotel.

The former Love Island star took to her Instagram page to show her fans what the pair got up to on their romantic trip together.

The 25-year-old shared a series of snaps on her social media including selfies, food and the local culture they visited.

She captioned the photos: “Made some memories in Milan.”

Dani started off the post with a mirror selfie while she wore a stunning black outfit with black leather knee high boots.

The star went for her usual full glam makeup along with her blonde hair styled into loose curls.

She followed this with a sweet snap of herself sat with her boyfriend Jarrod as they smiled from ear to ear while sitting at the table having had a romantic meal together.

The pair enjoyed some delicious looking food while away together, including pizza, sushi, pasta and plenty of cocktails.

Dani went on the share a funny clip of her boyfriend downing some sort of drink while he had to hold his nose to get rid of the taste.

Fans and friends took to the comments to say how great the couple’s trip looked.

A second said: “Hope yous had the best time, looks beautiful,” while one added: “You look so happy. You deserve every happiness lovely xx”

Another commented: “Gorgeous photo of the cathedral and such a cute couple. Also such lovely photos and sure did make some memories in Milan. Milan is gorgeous.”

In a separate post Dani and Jarrod wrapped their arms around each other while posing for a photo together.

She accessorised the outfit with a white Fendi purse.

Jarrod and Dani recently confirmed their relationship after weeks of dating and have since been sharing plenty of photos of each other.

The former Love Island winner, welcomed her first child into the world with her now-jailed ex Sammy Kimmence, 25, in January last year.

Sammy was sentenced to 42 months in prison after scamming vulnerable pensioners out of £34,000 in a sick financial investor fraud scheme.

At the time it was reported that he used the money for lavish clothes, expensive restaurants and hotels.

However, he has now been moved to an undisclosed prison and Dani doesn’t want her son in the environment.

It’s thought that Sammy didn’t get to see Santiago over the Christmas period due to lockdown rules in his new prison.

15 Ways to Connect With Your Clients This Valentine’s Day