The ring-tailed lemurs have arrived — seven of the fluffy little things. They should be joined soon by flocks of flaming pink flamingos.

Meanwhile, the giant tortoise population is likely to increase once they make the short trip over from neighbouring Necker Island. But the most important new arrivals on Moskito are the homeowners, of whom there are currently eight (with one more to sign up), who paid Sir Richard Branson some £22 million for their two-acre plots and then lavished — or will do over the next couple of years — around £45 million on building their dream holiday hideaways. Their identities are meant to remain a secret. I know who some are but have promised not to spill the golden beans. Suffice it to say this is the most exclusive home owners’ association in the world.

No other private island comes close to it — although its genesis chimes with another Caribbean honeypot, Mustique, which Colin Tennant (Lord Glenconner) bought on a whim in 1958, before inviting the great and notorious (including Princess Margaret and Mick Jagger) to build houses. 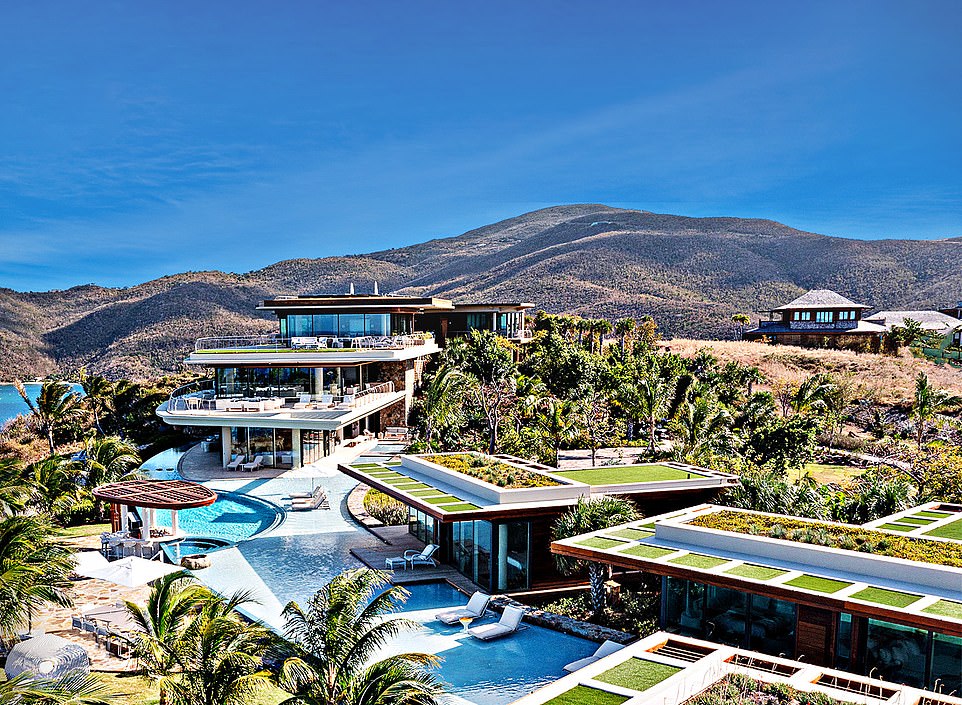 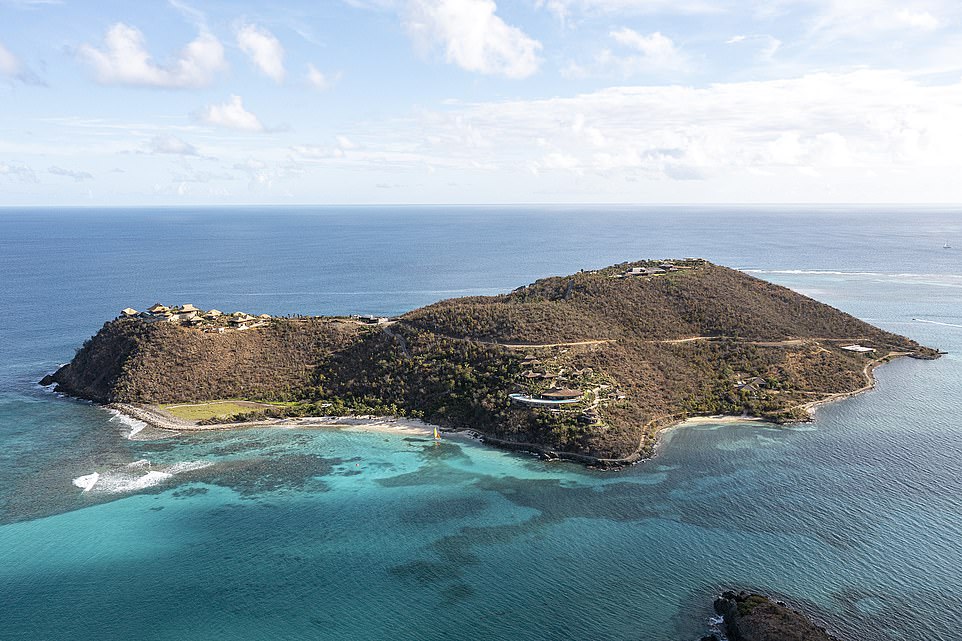 ‘No other private island comes close to it,’ Mark says of Moskito Island, pictured

Moskito, 125 acres in total and less than a 10-minute speed boat ride from Virgin Gorda in the British Virgin Islands, had been in Branson’s sights — literally — since the day he first set foot on Necker.

There are less than two miles between the two islands, separated by a spectacular coral reef teeming with tropical fish. The irrepressible Virgin boss, now 72, regularly kitesurfs from Necker to Moskito.

In 2006, he heard that a hotel was to be built on Moskito — and didn’t like the sound of it. If anyone was going to build a hotel — or build anything on Moskito — it would be him.

So Sir Richard approached the owner, who lived in a corner of the island where he ran a dive centre called Drake’s Anchorage, and bought the whole shebang. 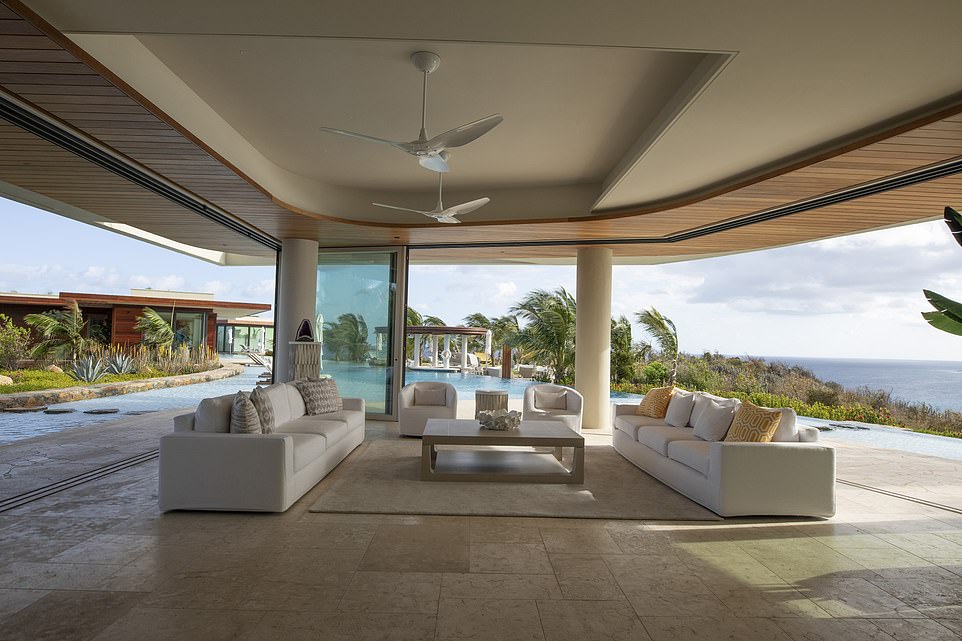 ‘On our first day, I start counting the white sofas in the house but give up at 24,’ says Mark. Above is the Oasis Estate’s Great Room 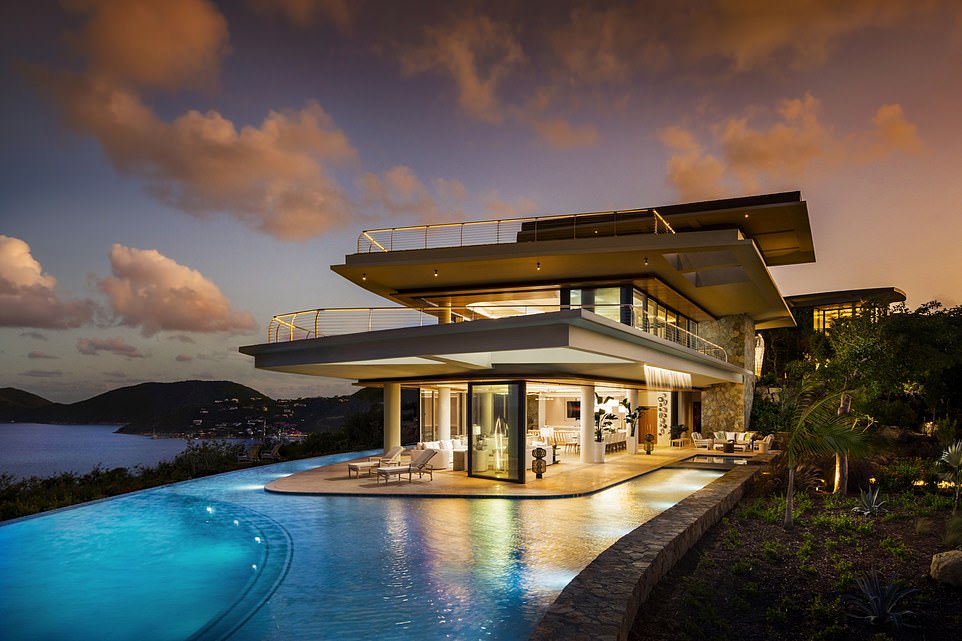 The deal was concluded a year later — and so began one of his more outlandish projects.

Apparently, his wife, Joan, questioned why he needed another island, but by then he had drawn up plans for his own house on Moskito, the Branson Estate, which he thought might become his permanent home rather than the one on Necker.

The good news for the rest of us is that we can now rent several of the houses — including Branson’s — on Moskito under the Virgin Limited Edition banner, on an all-inclusive basis, complete with a full complement of staff, use of the island’s private beach, an array of water sports, tennis and transport via buggies (no cars allowed) to whisk you hither and thither.

The bad news is that few of us could afford to do so. 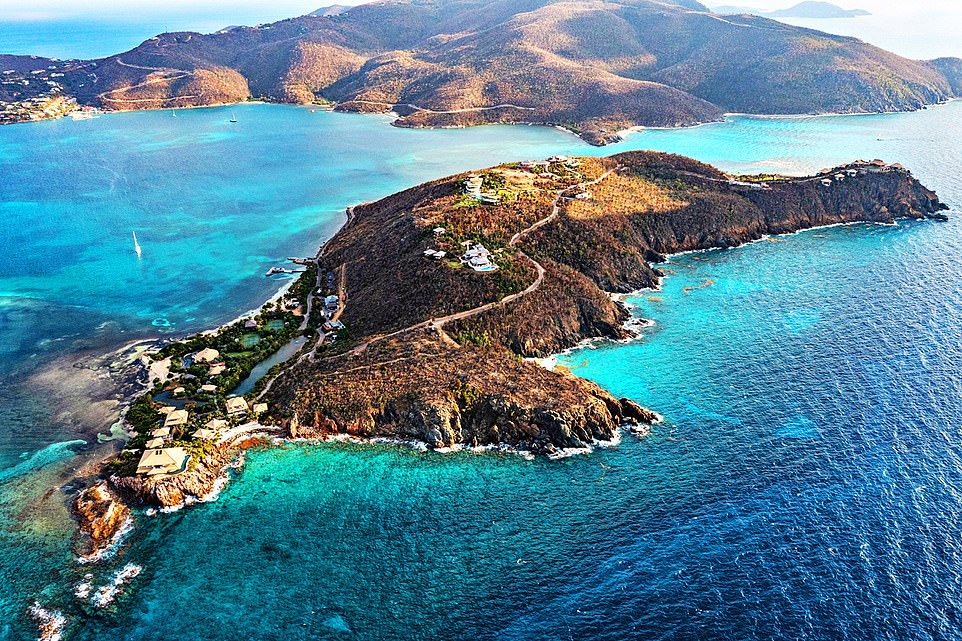 Moskito, 125 acres in total and less than a 10-minute speed boat ride from Virgin Gorda in the British Virgin Islands, had been in Branson’s sights — literally — since the day he first set foot on neighbouring Necker Island

A chef rustles up a pizza on the island. Each estate has its own staff, Mark reveals 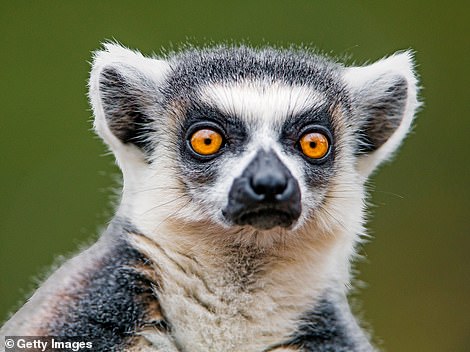 My wife and I have been invited to stay three nights at the nine-bedroom Oasis Estate, which occupies the highest point on the island.

We are not paying the £200,000 a week — which it normally costs in high season — but would give anything to be in a position to do so, inviting family and friends to pack their bags and come on over (‘we’ll pay for the house; you just take care of your flights’).

The Oasis Estate looks like a giant gleaming yacht, with four decks, complete with handrails on the upper floors and, appropriately, water wrapped around the building on three sides, ankle deep in parts, which from a distance gives the impression of people walking on water.

There is also a swimming area, with a swim-up bar, lit at night by fairy lights.

The floor to ceiling doors and windows somehow disappear during the day, giving uninterrupted views of various other islands in what’s called North Sound — including Eustatia, owned by Google co-founder Larry Page, and Saba Rock, which belonged to the Czech billionaire (who started out as a photocopier salesman) Petr Kellner until his fatal helicopter accident 18 months ago in Alaska. 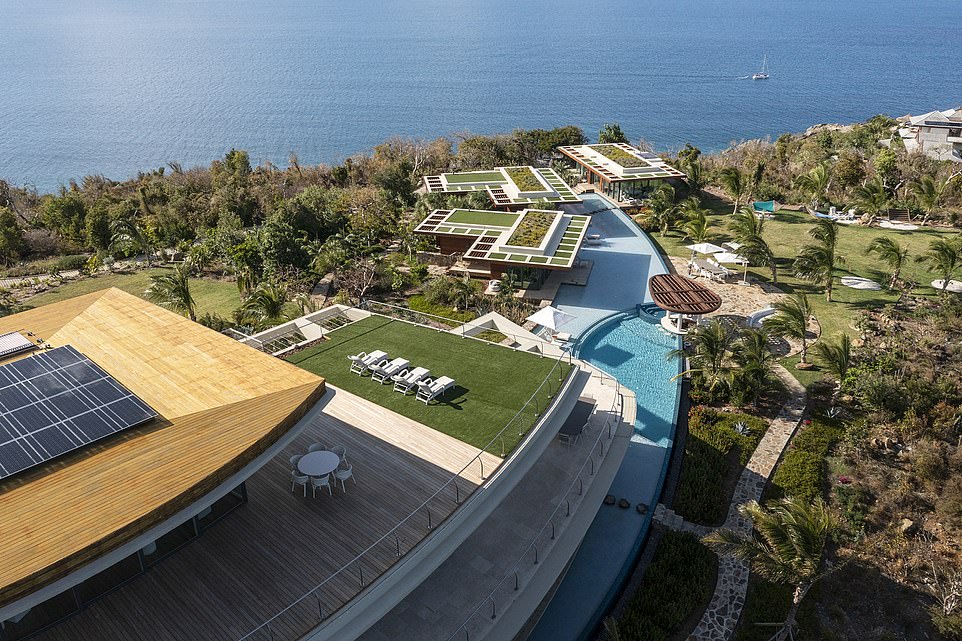 The Oasis Estate is owned by Seattle software tycoon Naveen Jain. Mark spots his book, Moonshots: Creating A World Of Abundance, ‘lurking in one of the bedside tables’

On our first day, I start counting the white sofas in the house but give up at 24. There are four in the master bedroom alone, itself the size of a tennis court if you count the outside terrace.

I’m allowed to report that the Oasis Estate is owned by Seattle software tycoon Naveen Jain (a hint is his book, Moonshots: Creating A World Of Abundance, lurking in one of the bedside tables).

Certainly, there’s no questioning the abundance to be found in his holiday lair. This is an off-the-scale Grand Designs project using tons of stone harvested from the excavations, white marble from Greece and toughened glass just in case any cousins of Hurricane Irma come to call.

We have four bars to choose from, including one on the roof where star-gazing is encouraged. Speaking of which, Paris Hilton and her husband, Carter Reum, spent a week of their never-ending, round-the-world honeymoon here. 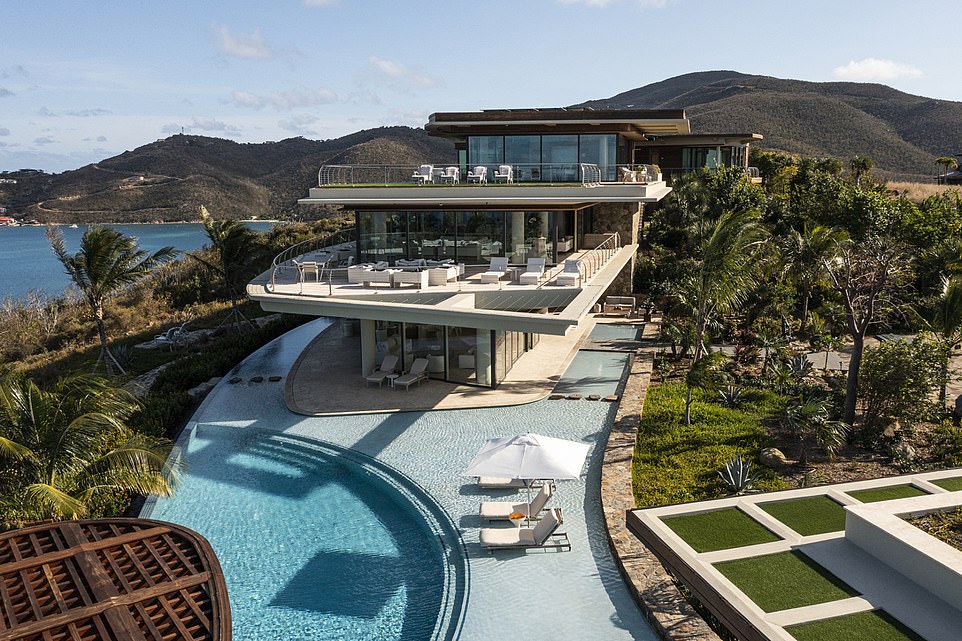 ‘There’s no questioning the abundance to be found in his holiday lair,’ Mark says of the Oasis Estate 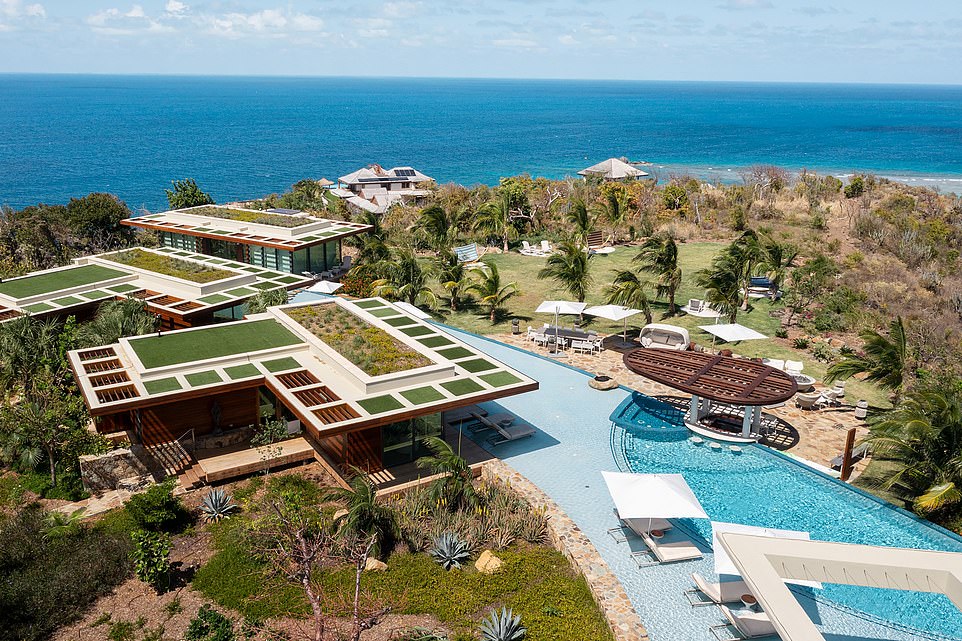 The Oasis Estate is an ‘off-the-scale Grand Designs project using tons of stone harvested from the excavations, white marble from Greece and toughened glass’

But Moskito does not seem like an It Girl sort of place, despite the inexhaustible Instagram opportunities. It’s far too discreet, self-contained.

There will only ever be ten plots.

During our visit, the finishing touches are being put to an astonishing ‘estate’ called The Village, perched high on a cliff at the north end of the island, which has now joined the rental pool. 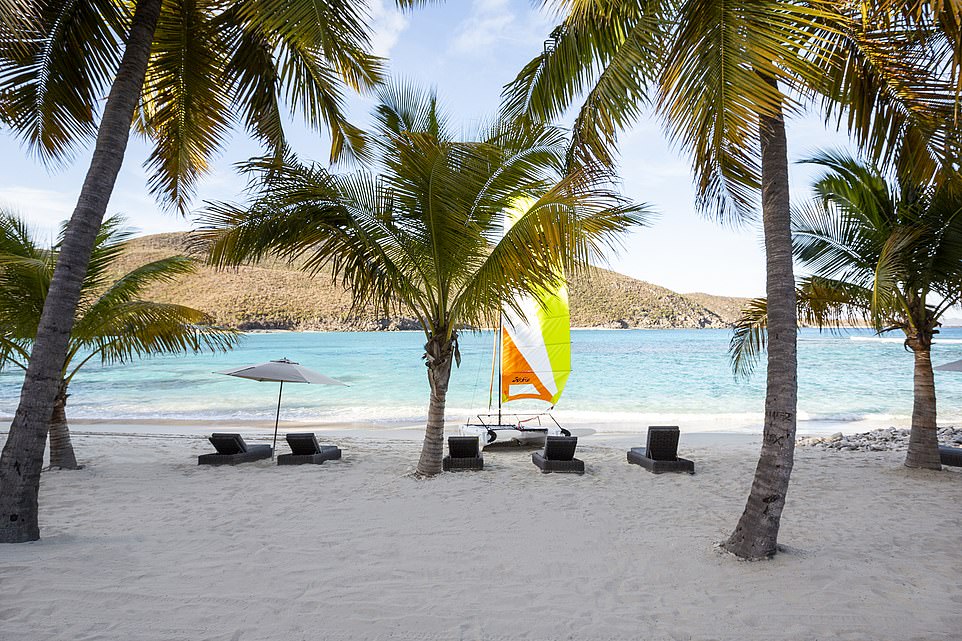 Above is one of the beaches on Moskito island. Branson, now 72, regularly kitesurfs from Necker to Moskito

Guests here — sleeping 18 — will stay mainly in individual Bali-style houses and I get the impression that the British owner likes a party.

How could they not when at the press of a button a twin-deck DJ station rises from the floor in one of the bars, with strobe lighting and speakers the size of oversized suitcases? Or when you can take the slide from the upper pool to the lower pool? Or visit a watery grotto under the main house?

Or when you build a no-vertigo-sufferers-please hot tub jutting out at right angles from one of the cliffs, with a glass bottom so you can see the jagged rocks below? 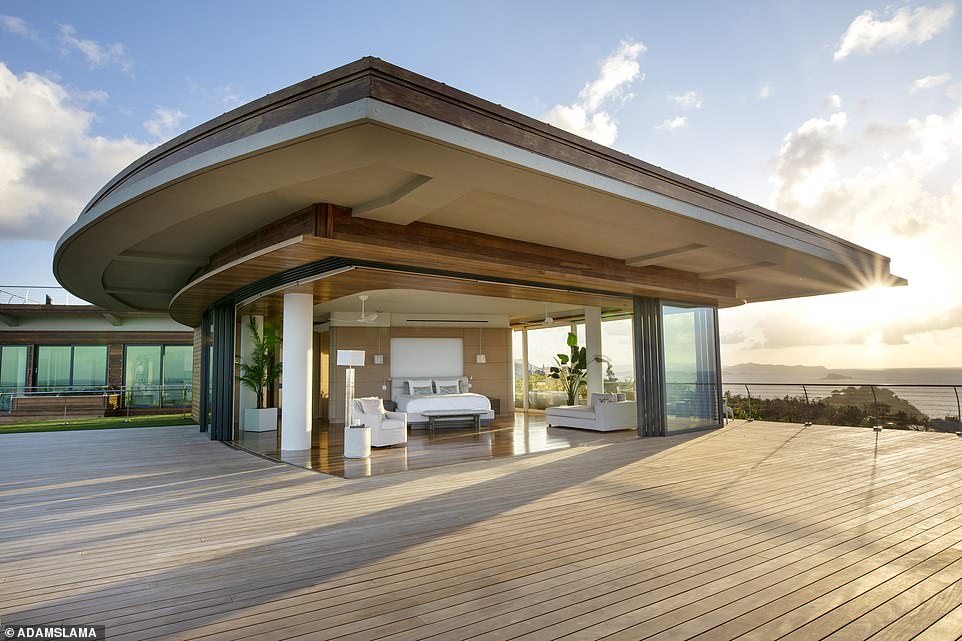 The Oasis Estate’s master suite (pictured) is the size of a tennis court if you count the outside terrace, Mark reveals 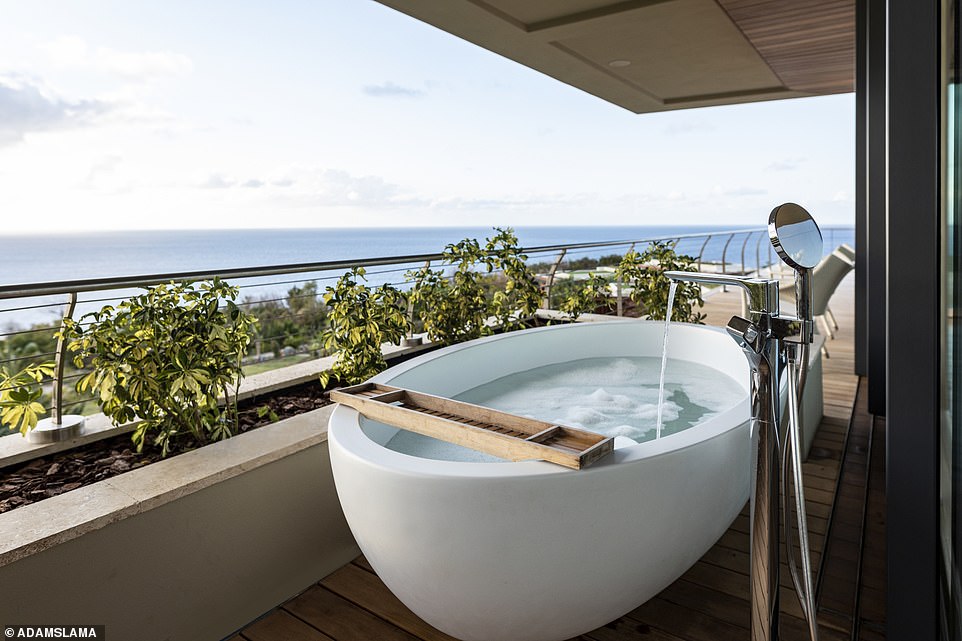 Above is a tub in the Oasis Estate’s expansive master suite. Mark describes the island as ‘discreet’ and ‘self-contained’ 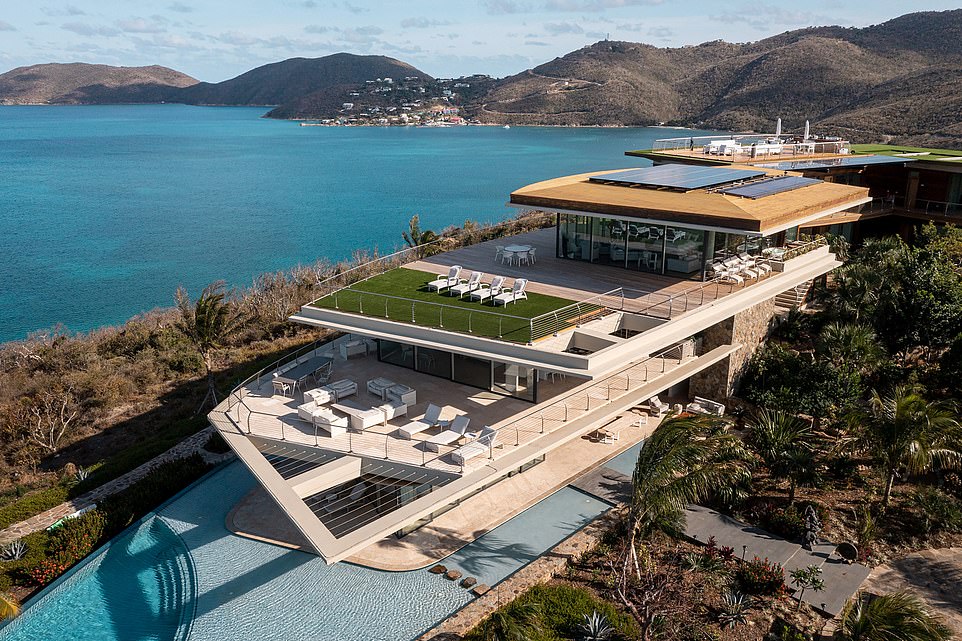 There are four bars to choose from at the Oasis Estate, including one on the roof where star-gazing is encouraged

During Mark’s visit, the finishing touches are being put to an astonishing ‘estate’ called The Village (above), perched high on a cliff at the north end of the island

Elegant Resorts (elegantresorts.co.uk, 01244 897294) offers seven nights at The Oasis Estate from £184,330 or £10,240 per person based on 18 guests in nine double rooms. The price includes international and domestic flights with British Airways via Antigua and Intercaribbean, all meals and drinks, private boat transfers, UK lounge access and all recreational facilities on Moskito Island. Valid for stays between June 1, 2023 and September 30, 2023. For more info on Moskito Island visit moskitoisland.virgin.com or call 0800 716919.

The Branson Estate comprises three separate houses linked by wooden walkways and has a more traditional Caribbean vibe. Up to 22 people can sleep here and it has its own private beach.

Headland House is the biggest on the Branson Estate; the two other buildings belong to Sir Richard’s children, Holly and Sam, who spend a lot of time here with their respective families. Moskito has its communal areas, such as the Beach Club with its own bar and restaurant, tennis courts and watersports. On pristine Manchioneel Beach, there’s yet another bar and restaurant and above this beach sits the Point Estate, which is occupied during our visit.

We can’t go in but we can look through the front door and admire the infinity pool that wraps round the main living space.

Each estate has its own staff. Olivia, who grew up in Shrewsbury, is in charge of Oasis.

Before arriving, all guests are contacted by their house manager and asked about food and drink preferences; spa treatments (therapists are brought over from Virgin Gorda) and anything else that might be important.

‘I have a thing about negronis,’ I had told Olivia on a WhatsApp call before leaving soggy Britain.

But, then, our whole three days are an eye-opener, the kind of which we are unlikely ever to experience again.

There was only one hiccup: it rained almost solidly for two days.

A salutary lesson, perhaps, that there are some things money just can’t buy.

How to protect your Firefox saved passwords with a Primary Password