Inside the Aman New York – Manhattan’s most expensive hotel, where rooms start at $3,900 PER NIGHT

The ultimate spot in Manhattan for alleviating stress? It turns out the entire hotel is the ultimate Big Apple stress-buster. A temple of tranquillity for generation zen.

Even the reception area is a haven of serenity. Though pulses may quicken there – even for hedge-fund managers – upon presentation of the bill. For Aman New York – located by Central Park on 5th Avenue in the iconic 30-storey Crown Building, designed by Grand Central Station architects Warren & Wetmore – is the city’s most expensive hotel. The starting price for rooms? A cool $3,900 (£3,460) per night. But what rooms. 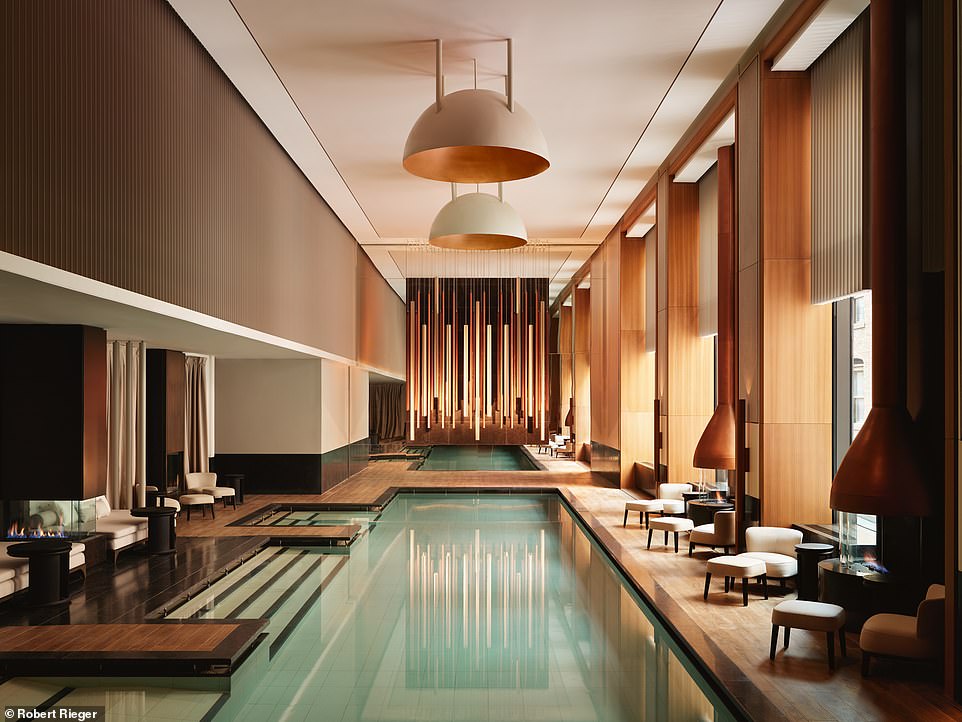 The new Aman New York hotel has a gigantic spa that features a sensational 20-metre swimming pool with firepits (above). Ted Thornhill checks in 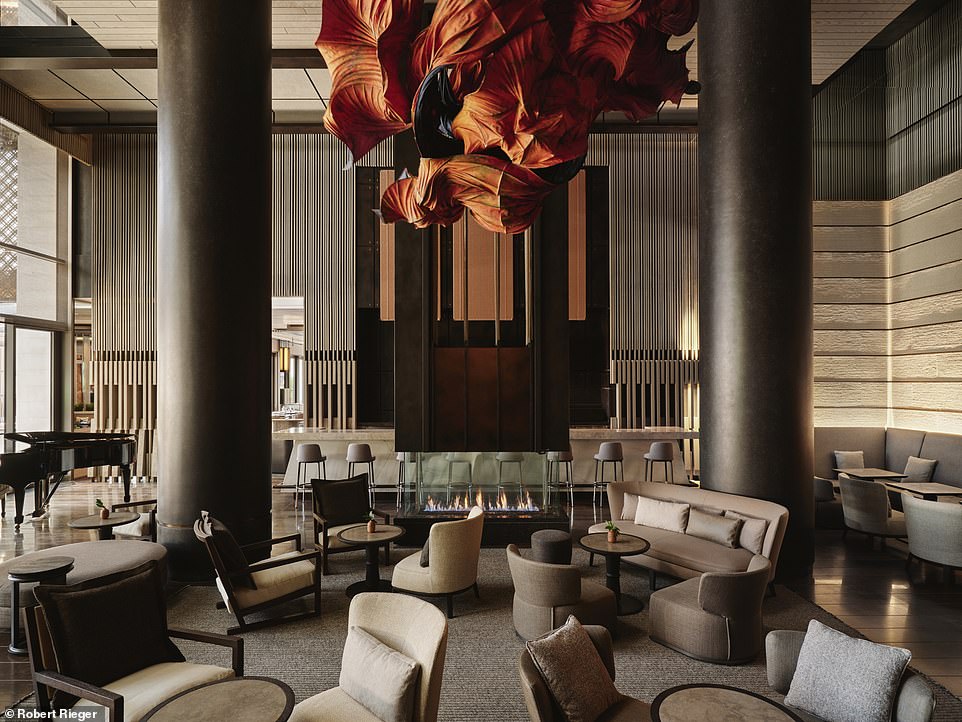 Mine, a ‘Premiere Suite’, is a masterpiece – 75 square metres (815 square feet) of soothing luxury with a beguiling pared-back look that, as with the rest of the hotel, is inspired by Aman’s Asian origins (‘Amanpuri’, the original of the 34-property-strong Aman portfolio, opened on the Thai island of Phuket in 1988).

Deluxe woods are bountiful, there’s a standalone oval tub big enough to do laps in and oversized twin beds (I’m here with a chum) with $15,000 (£13,500) mattresses smothered in heavenly duvets and pillows.

On the wall opposite the bed is a large-scale art mural inspired by the 15th-century masterpiece Pine Trees (Shorin-zu byobu) by Hasegawa Tohaku, designated in Japan as a National Treasure in 1952.

Behind the bed is an attractive folded dressing screen made of woven rope that cleverly houses some of the rooms many light switches. 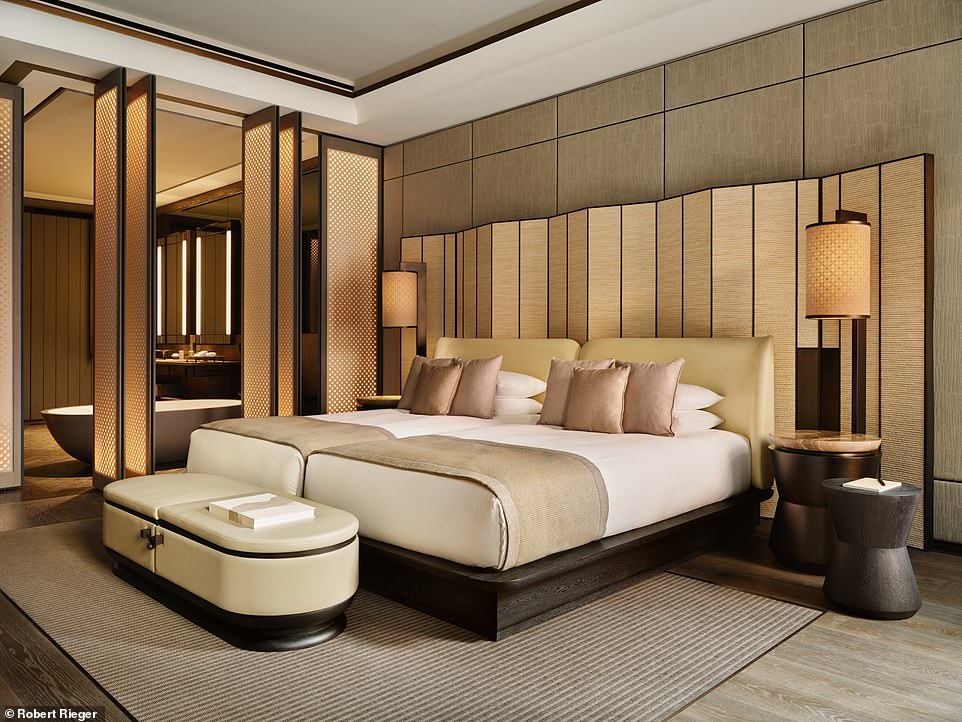 Aman New York features 83 gargantuan suites – plus 22 residences. Pictured above is a Junior Suite in a twin-bed configuration 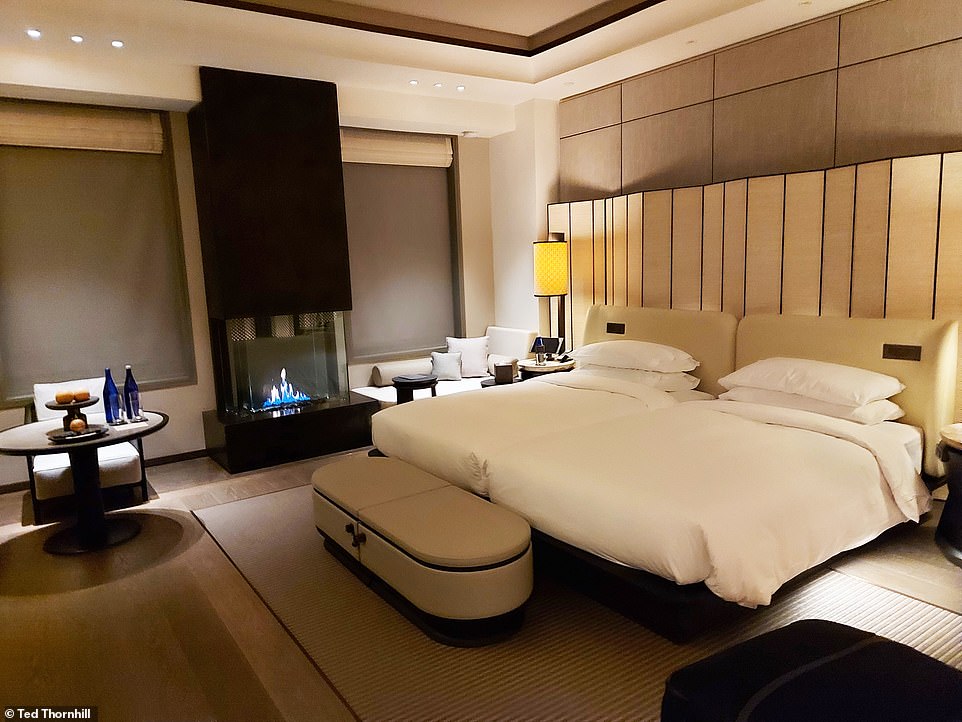 Ted takes this picture of his ‘Premiere Suite’ upon entering it for the first time. He describes it as ‘a masterpiece – 75 square metres (815 square feet) of soothing luxury’. Aman New York is the only hotel in Manhattan to have a working fireplace in every bedroom 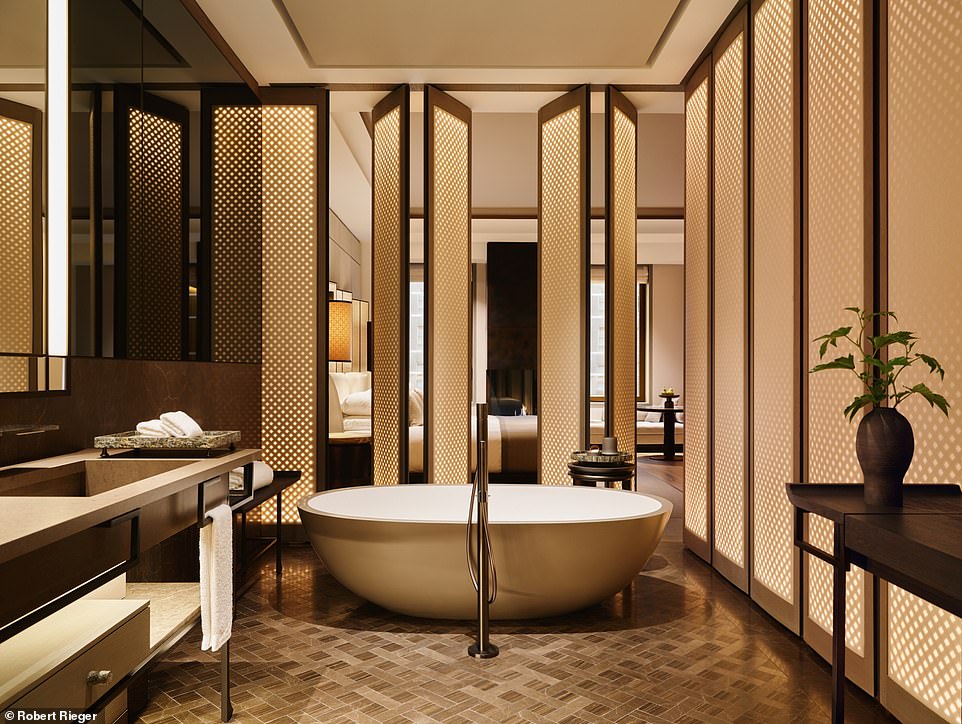 The Aman New York bedrooms have pivoting louvre doors that can be angled to open up or seal off the space. Pictured above is a Junior Suite 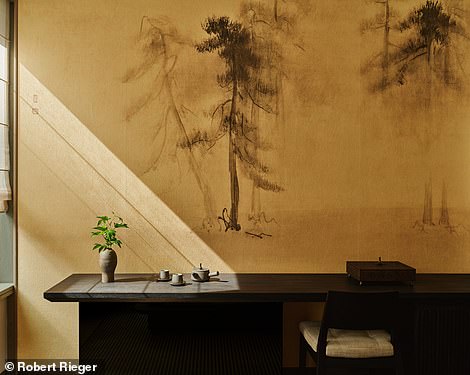 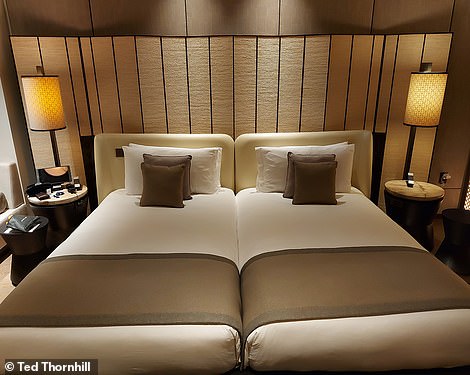 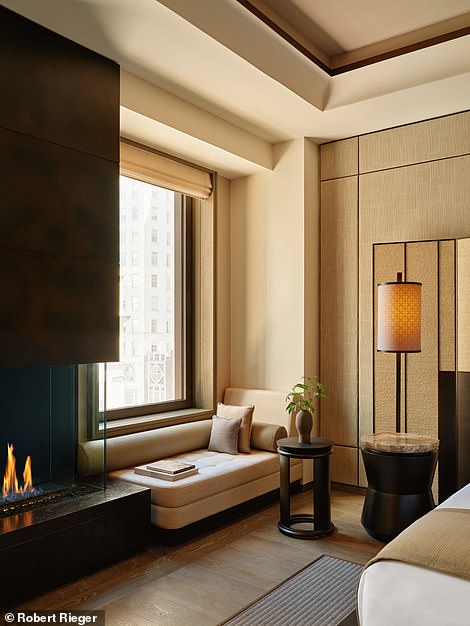 It’s an eye-catching touch, as is the gas-powered fireplace. This is the only hotel in New York with a working fireplace in every room.

I also love the way the main bedroom is separated from the bathroom by a series of pivoting louvre doors that can be angled to open up or seal off the space. Backlit rice-paper panels set within each door, meanwhile, enhance the relaxing ambience – as does the soundproofing.

The room is whisper-quiet – engineered we’re told to be as hushed as a recording studio.

I enjoy disturbing the peace by using the room’s tablet controller to extinguish and reignite the fireplace – and to direct the TV to disappear into the desk beneath it.

(And in the middle of the night the fancy hi-tech Japanese Toto toilet – which we nickname R2 D-Loo – emits the occasional beep and whir.)

Interior-design sorcery seems to be at work – I feel soporifically cocooned, yet there’s enough space for a small orchestral concert. Or easily my entire two-bedroom London flat, which covers a mere 675 sq ft (63 sq metres).

And this 8th-floor room, I discover, is actually one of the smallest in the hotel. Herein, incidentally, lies part of the explanation for the credit-card-sapping tariffs – there are no small rooms. Only 83 gargantuan suites – plus 22 residences.

At both breakfasts during our two-night stay, we’re joined by only a handful of guests. Perhaps there are more, but they’re mesmerised by their fires and the TVs going up and down. 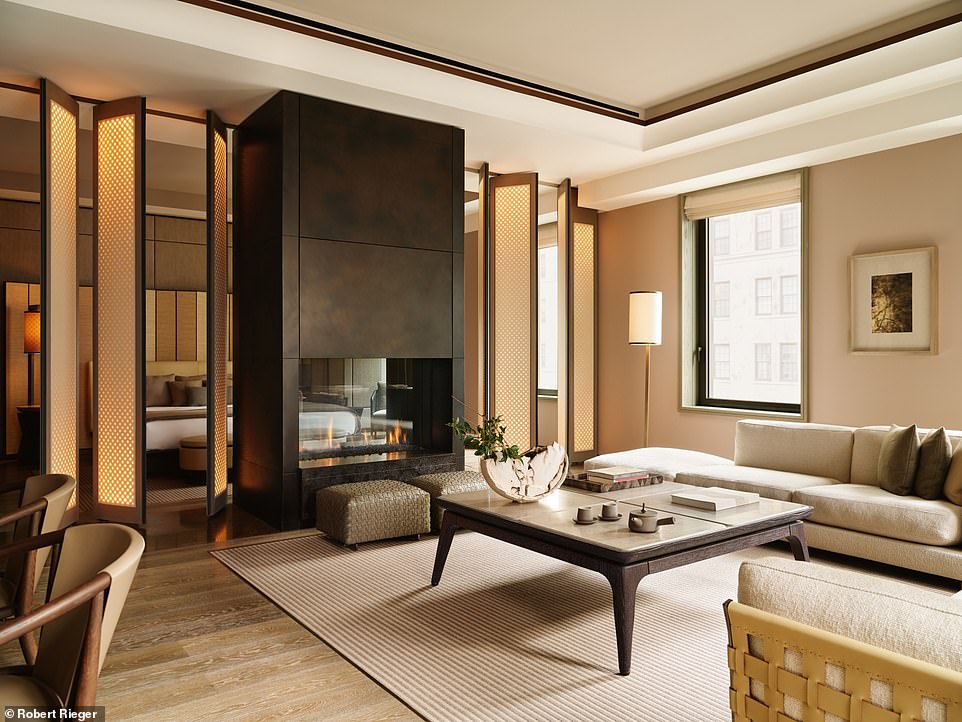 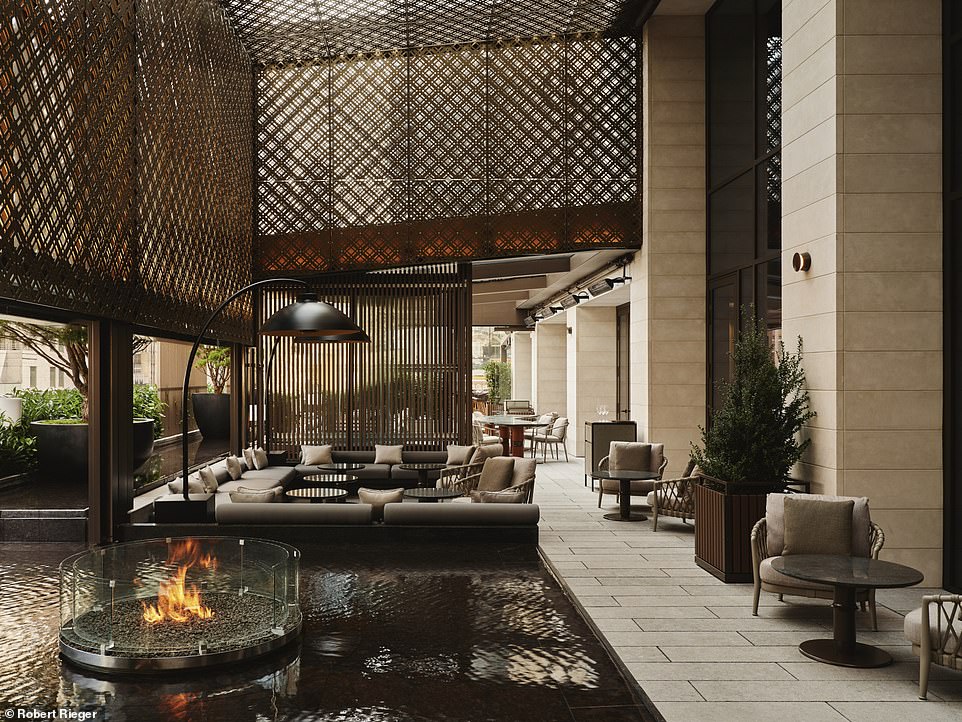 Aman New York is located by Central Park on 5th Avenue in the iconic 30-storey Crown Building designed by Grand Central Station architects Warren & Wetmore. Pictured above is the pool and firepit on the roof terrace 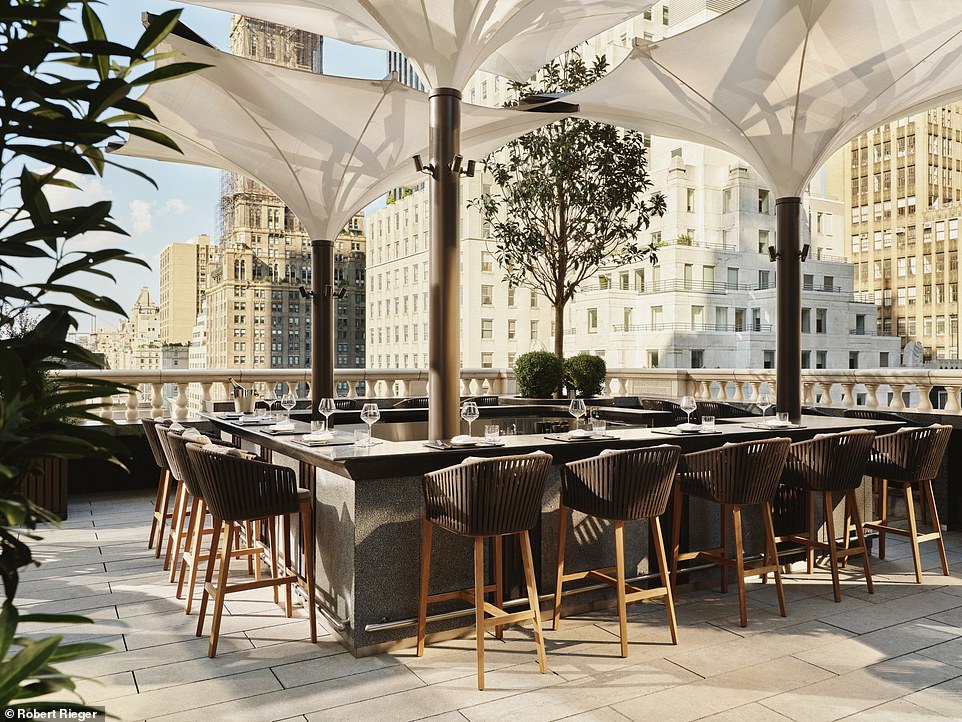 This terrace bar area will be one of Manhattan’s most sought-after drinking spots in the warmer months, predicts Ted

The venue for breakfast is the 14th-floor Italian restaurant – Arva – reached via the reception area and the show-stopping double-height pillared atrium, populated by fireplaces, a grand piano, sophisticated grey-hued chairs, sofas and banquettes, a sleek bar frequented by beautiful women in designer clothes – and a giant, dreamlike series of Oriental-lantern-inspired paper and bamboo sculptures by Dutch artist Peter Gentenaar suspended between the room’s four stone columns.

Tranquil – but with a sprinkling of wow.

Arva, in the building’s southeast corner, is quietly chic, with banquettes and elegant chairs in grey, modish dark-wood tables, a ceiling accentuated by slabs of petrified wood and a floor-to-ceiling wine cabinet to remind guests that Aman isn’t just a temple of tranquillity, it’s a temple of fine wines, too.

At breakfast we stick to cups of smooth coffee, along with pastries and a la carte fare such as eggs of the Florentine and Benedict variety. 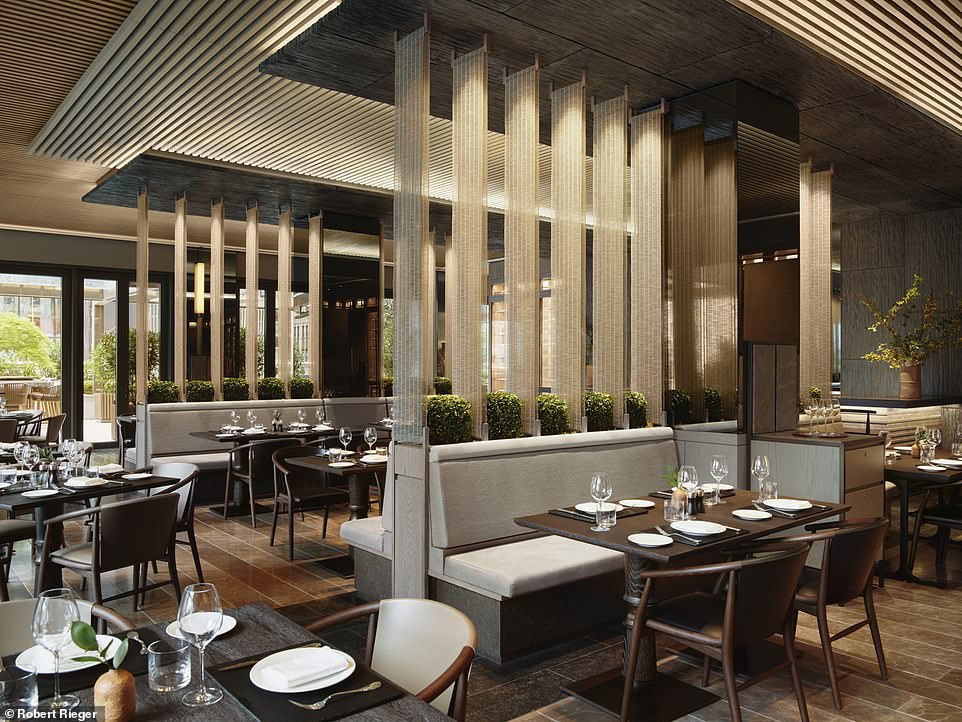 Pictured above is the hotel’s Italian restaurant, Arva, where Ted enjoys breakfast, lunch and dinner

The breakfast menu blurb boasts of ‘seasonal produce transformed by the alchemy of the kitchen into simple, nourishing dishes, alive with flavor’.

That’s possibly hyperbole – but the breakfasts are tasty and nicely presented, with the jams and butter arranged in a row on a little tray, for example.

We revisit Arva twice more – for dinner and lunch.

For the former, the restaurant really comes alive. It’s busy and bubbly – and the wine flows.

We enjoy some refreshing local rose courtesy of North Fork of Long Island ($19), Castiglion del Bosco Montalcino red, which at $49 is the most expensive red by the glass (happily, it tastes expensive) – and tuck into some great food. 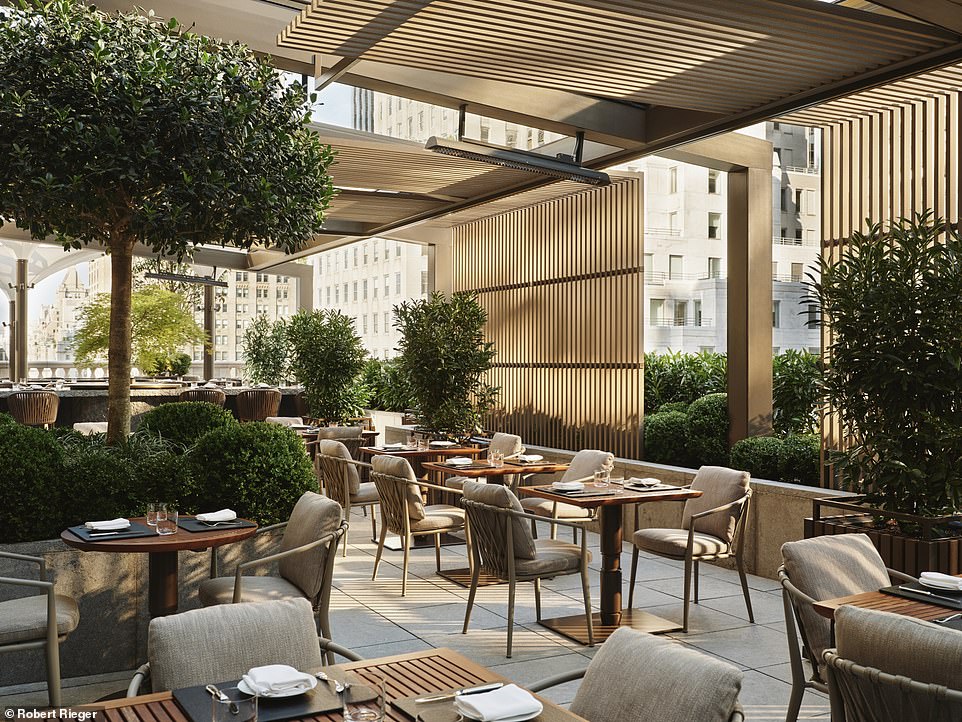 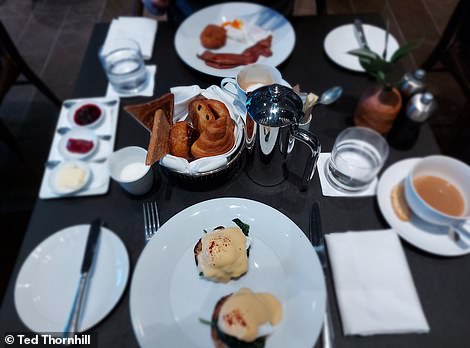 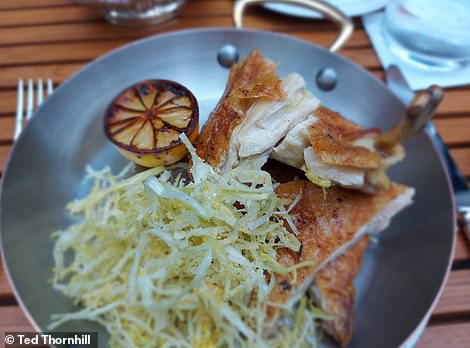 LEFT: A snap of one of Ted’s breakfasts, featuring pastries, coffee and eggs Florentine. RIGHT: The lunch main – grilled chicken 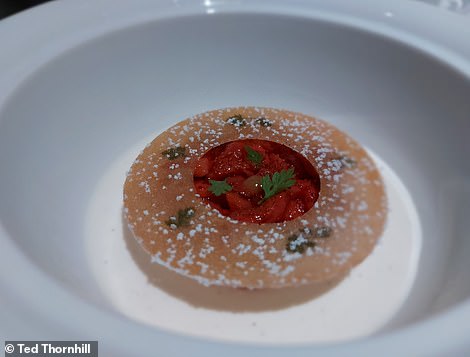 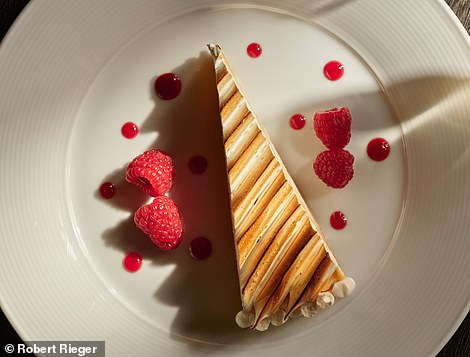 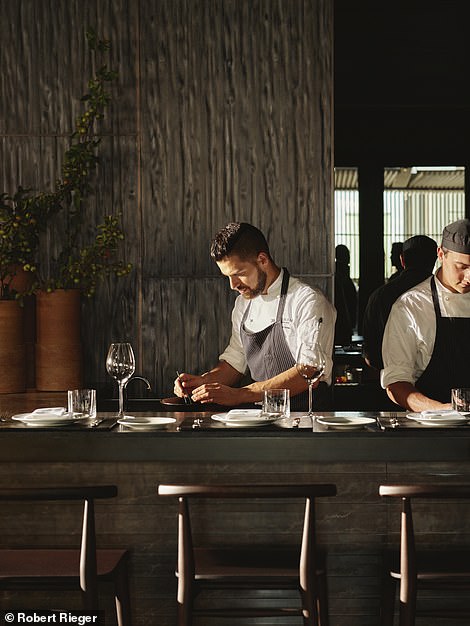 Chefs at work at Arva, which is located on the 14th floor

For starters (antipasti), there’s a superb burrata with pistachio pesto and a pile of lightly battered calamari, langoustines and zucchini that looks like a mini coral reef, for mains it’s tagliatelle with chanterelle and goat’s cheese, and for desserts a fresh and light, geometrically perfect panna cotta and a beautifully presented lemon tart.

For the Arva lunch we sit outside on surely one of the most splendid hotel terraces in all of New York, which wraps around the building and features a dramatic circular pool with a fire in the middle – and a retractable roof.

As we sit underneath it during a rain shower – making our way through the likes of delectable grilled chicken, veal loin, beef tartare and salmon with smoked paprika – we agree that the bar in the corner, which isn’t covered by the roof, will become one of the most sought-after quaffing spots in Manhattan in the summer, given the views it offers down 5th Avenue and along the eastern edge of Central Park.

After lunch we head in the opposite direction, stopping for on-point cocktails at stealthy Temple Bar on Lafayette Street and subterranean, plant-filled Undercote in the Flatiron District , before taking in a Broadway show – the incredible Beetlejuice the Musical (the musical, the musical). Which is even better than the beloved movie. 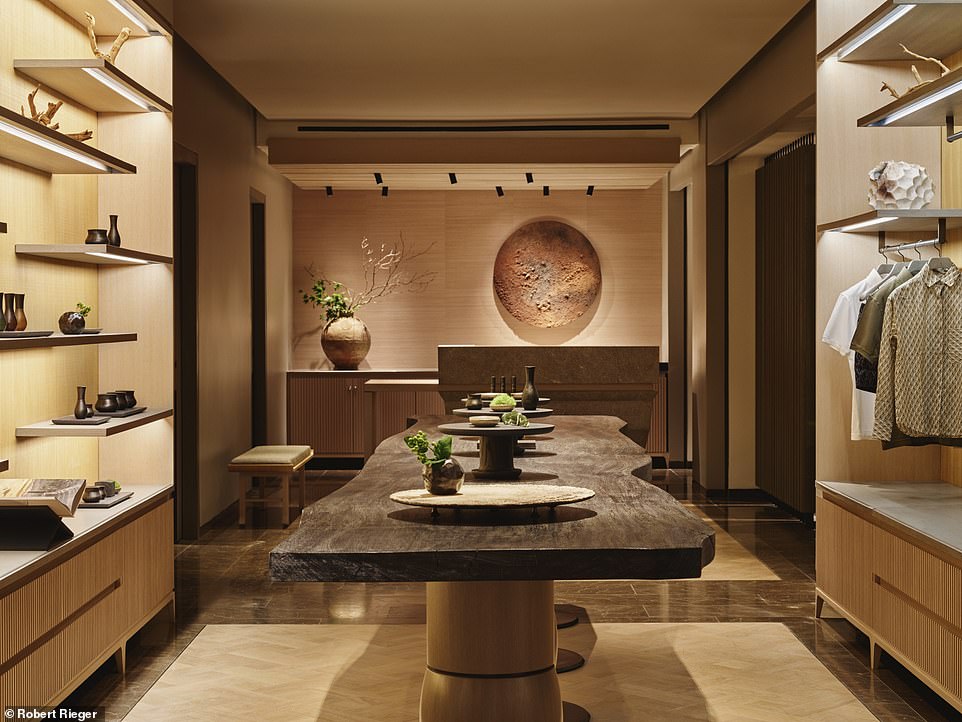 The spa (above) at Aman New York covers 2,300 square metres across three storeys 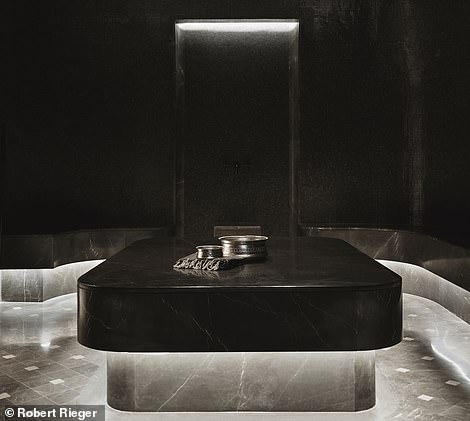 The hammam at the Aman New York spa

Afterwards we battle through bustling Times Square to the hotel and decide to maintain the tempo with a nightcap in Aman’s remarkable underground speakeasy-style Jazz Club, which has a stage with a Steinway piano for performers and, audiophiles note, a state-of-the-art sound system.

Though as we drink vodkas at the horseshoe-shaped bar there’s a DJ spinning dance versions of Oasis tracks. The atmosphere is slightly odd, with expensively suited men and women in chic evening wear not seemingly in the mood to dance, but unable to have conversations over the loud music.

The venue is probably more alluring during live performances.

The next morning we wake up enveloped in a cocktail-induced daze – standard for a trip to Manhattan, of course – and in such moments the Aman New York comes into its own. 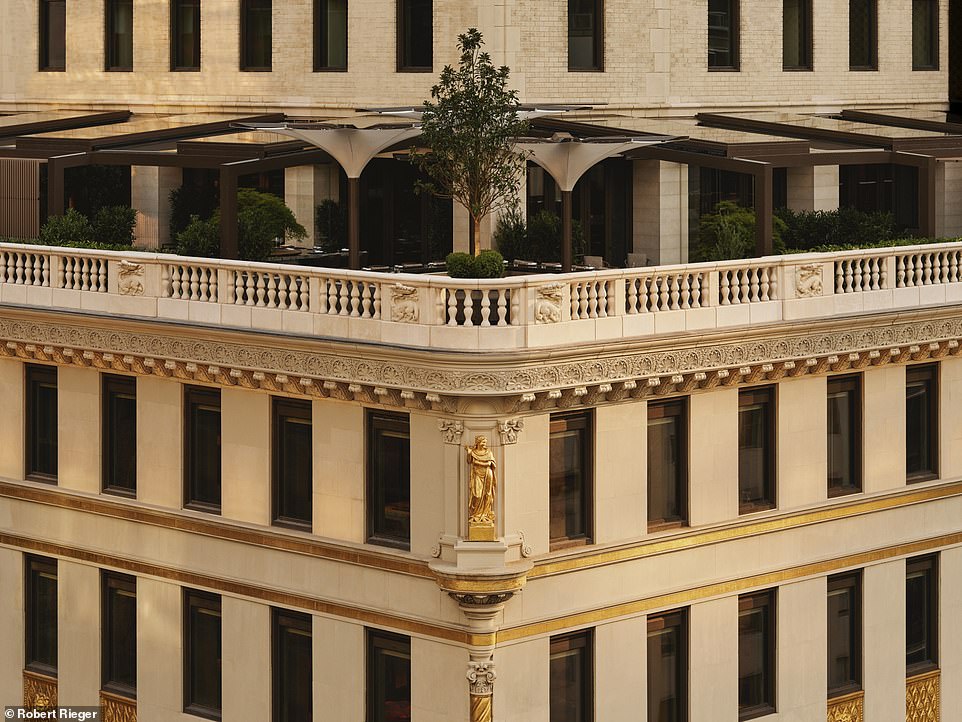 Aman New York occupies floors seven to 30 of the Crown Building, the bottom floors being high-end retail outlets such as Zegna and Bulgari 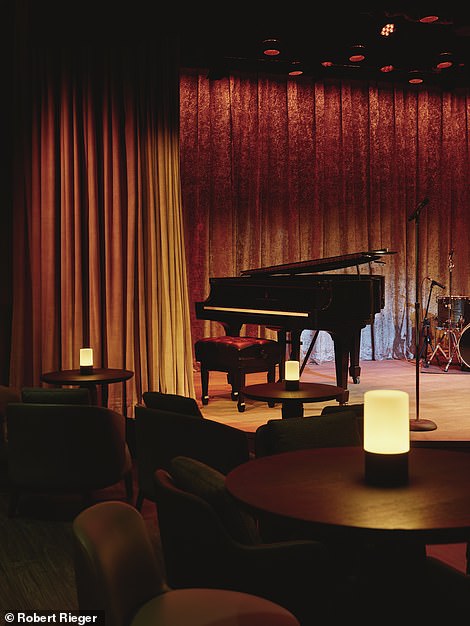 Aman New York’s Jazz Club, which becomes a nightclub later on in the evening

For guests who find themselves in a similar state I highly recommend a dip in the aforementioned pool, which they’ll find has an almost medicinal effect.

Counter-intuitively we must ascend to it from our luxury lair as it’s on the 10th floor (the hotel occupies floors seven to 30, the bottom floors being high-end retail outlets such as Zegna and Bulgari).

On our first attempt to reach it we mistakenly get out on the 14th floor and ask a man behind the reception desk for directions – and receive an impressive demonstration of top-level hotel service.

The staff member guides us via the elevator all the way to the spa and the pool, explaining the services on offer as he goes.

And then organises a pot of coffee for us. Above and beyond springs to mind.

The second time we attempt to reach the pool we get lost on floor ten, and this time receive directions from a stocky private security guard standing sentinel outside one of the rooms (after being challenged, in our robes and slippers, as to whether we’re hotel guests).

Harmony for some of the guests costs a bit more.

PROS: Breathtaking design. Sensational indoor pool. The bedrooms are masterpieces. Wonderful roof terrace. Staff that go above and beyond. Truly an urban sanctuary.

CONS: Even the one per cent may balk momentarily at the room rates. The jazz club late at night loses a layer of suaveness when it transforms into a quasi nightclub.

What Is Considered a Vintage Motorcycle?

What are the US midterm elections and why are they important? – BBC News

How to Find a Car Accident Lawyer