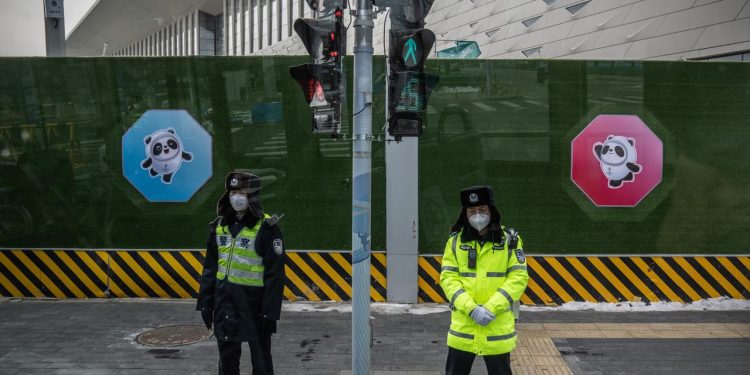 
The Beijing Olympics are taking place in a strict “closed loop” with 60,000 competitors, journalists and the Chinese workforce looking after them cut off from local people and tested for Covid-19 every day.

Media and workers have to stay in approved hotels within the “loop” — the organisers’ alternative name for a coronavirus bubble, designed to protect participants from the virus and the Chinese population from the foreign mini-invasion.

Wire fences seal off the area containing the Olympic venues and media centre in Beijing from the rest of the capital and the only way in is by shuttle bus or approved taxi.

Security guards bar the way of anyone who tries to walk out of the hotel grounds.

Bags are scanned as guests leave their hotels. Before boarding the bus, they must walk over to two cabins where staff in full protective gear awkwardly carry out mouth swabs from behind a plexiglass screen.

Once they pass into the Olympic area, the striking “Bird’s Nest” stadium in the distance is a poignant reminder of the more carefree 2008 Summer Olympics, when a fresh-faced Usain Bolt was roared to victory by a capacity crowd.

Those scenes belong to a different, pre-pandemic era. This time, the general public will be barred from sports venues because of Covid-19 precautions, although some invited guests will be allowed to watch.

Local organisers are reluctant to say exactly how many people are inside the “closed loop”, but the IOC says the number of daily Covid tests is a reliable reflection — on Saturday, 61,060 were carried out.

The Games don’t officially begin until Friday but there are already virus cases in the bubble — organisers said Sunday that 11 people, three of them athletes or other team personnel, tested positive in the most recently available results.

There is no getting out. Everyone, from cooks to bus drivers to volunteers, must sleep and eat inside the bubble.

“We work eight hours a day in the transport service and then when I go back to my accommodation I try to catch up with my studies,” a 24-year-old university student working as a volunteer at the cavernous Main Media Centre told AFP. He didn’t want to give his name.

All the Chinese workers will have to quarantine for up to three weeks when the Olympic circus moves on.

The cocoon encompasses all the Games venues, stretching to the Yanqing alpine skiing area and to Zhangjiakou outside Beijing, where the snowboarding and cross-country skiing events will be held.

China, where the virus emerged toward the end of 2019, has pursued a zero-tolerance strategy towards Covid-19 but the system has come under pressure with a series of outbreaks in recent weeks.

Beijing recorded its highest number of new cases for a year and a half on Sunday, with 20 in the capital.

Olympic organisers are confident that their measures will stop these Games adding to the rising infection numbers.

A similar system was in operation for last year’s pandemic-delayed Tokyo Summer Olympics, but the measures in Beijing are more stringent.

“We believe the closed-loop system will be effective in stopping transmission from spreading inside to outside or vice versa because we’ve seen it work,” said Dr Brian McCloskey, chair of the International Olympic Committee’s Medical Expert Panel.

“We’ve seen it work not just in Tokyo, we’ve seen it work in sporting events around the world, although I would say that no sporting event has had such a comprehensive closed-loop system as the Olympic Games.” Anyone entering the bubble must be fully vaccinated or face a 21-day quarantine when they arrive in China, and everyone inside must wear face masks at all times, apart from the athletes when they actually compete

What is Lunar New Year and how is it celebrated?