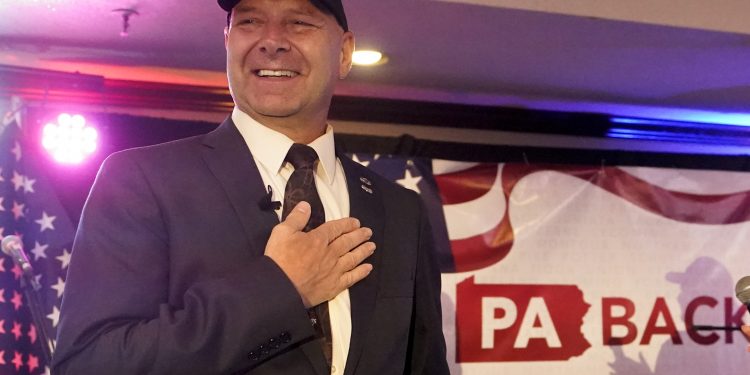 Trump was skeptical of Mastriano, according to a source familiar with his thinking, because he had “done nothing on the audit promises in a year,” a reference to an investigation of the 2020 election that he pushed in the state.

But on the Friday before Pennsylvania’s primary, with Mastriano ahead in the polls and ensconced as the clear favorite in the primary for governor, Trump changed his mind. He called up the state lawmaker and delivered the news he would endorse him, according to a person familiar with the conversation. A day later, Trump issued a statement announcing the nod.

The former president’s last-minute decision to publicly back Mastriano gave him another win to boast of on primary night, but at some cost. The endorsement stung not only some of his own aides and allies — who warned him about Mastriano’s electability issues — it also roiled a large swath of influential lawmakers and party officials in the state who now say Trump’s endorsement could end up damaging his own 2024 prospects in Pennsylvania, in the event he runs again.

“He’s alienated a lot of people on these endorsements. I guess the old saying in politics is that it’s better to be kingmaker than king. He just looks at who’s ahead in the polls and goes with that,” said former Pennsylvania GOP Rep. Tom Marino. “I’m very disappointed. Pissed off, to tell the truth.”

Marino supported Lou Barletta, the runner-up in the governor’s race, who has been among Trump’s most loyal allies in Pennsylvania. In 2016, Barletta was one of the first members of Congress to endorse Trump. But in the end, none of that mattered. Trump wanted to burnish his win-loss record and appease his base, which was frustrated by his endorsement of Dr. Mehmet Oz in the Senate primary, according to interviews with more than a dozen Trump aides, allies and Pennsylvania Republicans.

But by backing both Oz and Mastriano, Trump managed to upset nearly everyone — rank-and-file Republican voters who disliked the celebrity doctor, as well as state GOP insiders worried their gubernatorial nominee can’t win in November.

“I’m not very happy with his involvement in local races and endorsements,” said Rob Gleason, former chair of the Pennsylvania GOP, who endorsed former U.S. Attorney Bill McSwain for governor. “He doesn’t live in Pennsylvania. His name isn’t on the ballot. He might be wearing out his welcome.”

Mastriano’s campaign did not respond to a request for comment.

Mastriano, a retired Army colonel who supports expanding gun rights, sponsored a bill to ban abortion once a heartbeat is detected, and was a leading voice against Covid-19 restrictions, has used those criticisms as a battle cry for his supporters. At his election night party, he said his movement is “under siege.”

Down at Mar-a-Lago, prior to the endorsement, Trump was visited by a steady stream of Mastriano’s competitors who vied for his support. Barletta, businessman Dave White, and state Senate President Pro Tempore Jake Corman, who had become a golf partner with Trump, all courted him. But Trump didn’t want to back Barletta, who had lost a Senate run in 2018, wasn’t impressed by White’s polling, and, despite some chemistry, didn’t see a pathway to victory for Corman, who trailed in polls.

After Corman eventually dropped out last week, he and Trump spoke on the phone to discuss the race and Corman shared that he was supporting Barletta. At the time, Trump gave no indication of what he was going to do.

But according to multiple people, it was unlikely he would support Barletta, whom Trump had referred to at times as a “loser” because of his failed 2018 Senate campaign.

Asked for comment for this story, Barletta said: “At least I’m not a sore one.”

With only a few days remaining until the Republican primary, a number of people in Trumpworld told the ex-president not to endorse at all. And with far-right Senate candidate Kathy Barnette’s numbers surging as she campaigned in the state with Mastriano, others actively lobbied Trump against endorsing Mastriano, if only to curb Barnette’s rise.

One person particularly concerned with Barnette’s momentum was Fox News host Sean Hannity, who slammed the Senate candidate as “unelectable” on his show. In a sign of just how involved Hannity was in primary machinations, Oz thanked him in his election night speech for his “behind the scenes” work.

Donald Trump Jr. was another who voiced concerns internally to Trump’s staff about Mastriano’s electability in November, according to a person familiar with the conversations.

“The question here is, was the juice worth the squeeze? I think no,” said one prominent Republican involved in the governor’s race. “His standing and reputation — it took a big, big hit with both Oz and Mastriano [endorsements]. There is a third of the electorate that loves the endorsements, but there’s a great number of Republicans that don’t.”

Local party leaders were also frustrated by Trump’s eleventh-hour decision to wade into the governor’s race.

Asked if she was upset with Trump for endorsing Mastriano, Jackie Kulback, chair of the Cambria County Republican Party, said, “Yes. Absolutely.”

“We had our ground game in place,” said Kulback, whose county party backed Barletta and White. “We cannot ignore our countless hours of research and be swayed by the last-minute endorsement of former President Trump.”

As of Wednesday evening, the Pennsylvania Senate race is too close to call. Oz leads McCormick by less than 1,300 votes, with Barnette in third place. It could potentially go to a recount.

One person close to Trump said that in the end, the biggest factor in his decision to endorse Mastriano was his commitment to “election integrity” in the key swing state.

“The biggest reason why he did it was he said, ‘Mastriano was there for me and I need to be there for him,’” the person said, making comparisons to Trump and the criticisms he faced over electability when he ran for president in 2016.

But some Republicans in the state say that Mastriano’s laser focus on 2020 and false claims about the election could end up costing Pennsylvania the governorship — and ultimately hurt Trump and down-ballot Republicans in 2024. In Pennsylvania, the governor appoints the secretary of state in charge of elections, and control of the administrative office is seen as critical given the likelihood of close and contested elections going forward.

“He endorsed someone who is going to be very difficult to elect. I’ve heard from so many people who’ve said to me, ‘He obviously isn’t running for president,’” said former Pennsylvania Sen. Rick Santorum, who had backed Corman. “And their rationale is, ‘If he actually cared about winning the presidency, he would not want a Democratic governor or Democratic secretary of state to do what they did two years ago.’”

Alex Isenstadt contributed to this report.