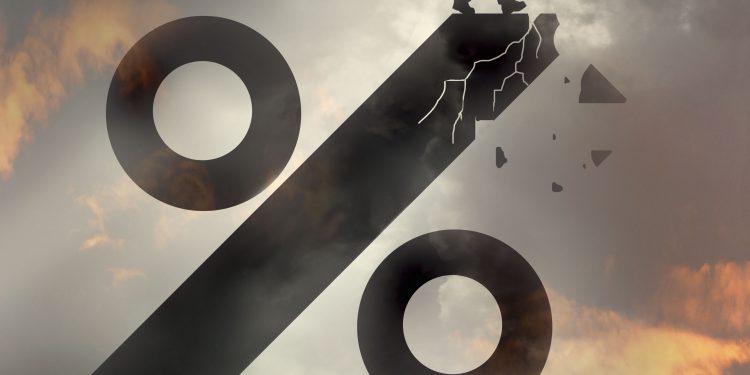 Tracking interest rates over the last 51 years with data provided by Freddie Mac shows that the last decade has had the consistently lowest rates with every single monthly average remaining under 4.5% interest on a 30-year fixed rate mortgage.

Credit card interest rates, have had much less fluctuations than mortgage rates since 1994 the first time data was tracked by the Federal Reserve. Rates have fluctuated from a low of 12.74% in the second quarter of 2014 to a high of 17.14% in the second quarter of 2019. Credit card interest rates are very unlikely to fall in any significant way over the coming years as credit balances are at an all time high in spite of the high interest rates. Unlike with mortgage rates, the government doesn’t have any programs in place to entice lenders to offer lower interest rates.

Why Interest Rates Differ So Much by Loan Type

Credit cards traditionally carry the highest interest rates primarily because they are unsecured loans, i.e. not secured by actual physical assets. Even though defaulting on a credit card loan will damage one’s credit there is no collateral that will be seized if payments are not made. Higher historical delinquency and charge-off rates, therefore, make credit card loans more expensive for lenders, as they offset those costs through higher interest rates passed on to consumers, These factors, along with the short-term and variable nature of revolving credit card loans, drive this interest rate differential compared to mortgage and auto loans that are longer-term, feature fixed payments and are secured by tangible assets.

While both new automobile and mortgage loans can involve borrowers missing payments and going into default, the repossession or foreclosure of the loan collateral helps mitigate the related losses. Another factor that tends to keep secured loan interest rates lower involves securitization, which entails lenders packaging and selling bundles of auto and mortgage loans to investors. This securitization of loans transfers the risk liability from lenders to institutional and sometimes individual investors. Credit card receivables (outstanding balances held by account holders) are also sometimes securitized by issuers but generally to a much lesser extent compared to mortgage and new car loans.

An additional factor reducing the risk and cost of mortgage loans is the influence of federally-backed mortgage loans offered through the government-sponsored enterprises of Fannie Mae and Freddie Mac. Neither organization originates mortgage loans directly but both purchase and guarantee mortgages from originating lenders in the secondary mortgage market to provide access to qualifying low and medium-income Americans in order to promote homeownership.

Those who suffer most from the highest cost form of credit: People making only minimum payments on credit cards or not paying their balances in full. These debtors can find themselves in never-ending cycles of high-interest credit card debt–especially if they need to make monthly payments on other types of debt obligations (despite their lower interest rates), such as student loans, mortgages, or auto loans.

What Role Does the Federal Reserve Play?

The Federal Reserve doesn’t set your rates directly but they do set the federal funds rate. Typically when the federal funds rate is low, interest rates on mortgages are lower and when the rate is high or the market anticipates the Fed will raise the rates, mortgage interest rates climb. The Fed most recently raised rates on March 17, 2022, with more increases expected throughout 2022.

Does My Credit Score Impact My Interest Rate?

How Do Interest Rates Affect My Ability to buy a Home or Car?

When interest rates rise, your monthly payment increases and the total amount you can put to principal decreases as you’ll be paying more in interest. You can see how this plays out in your particular situation by using our mortgage calculator or our auto loan calculator. As rates rise, your monthly payment becomes less affordable and eventually you may not be approved for a mortgage on the same home you could have if interest rates were lower.

While interest rates on mortgages and auto loans are climbing, they are still historically low when considering data from the last 51 years. Credit card interest rates have remained dramatically higher over time relative to other loan types, largely due to the unsecured and transactional nature of that type of revolving loan product.