A rule requiring female beach handball players to wear bikini bottoms rather than shorts during games has been reversed after an international campaign.

The International Handball Federation (IHF) introduced new rules earlier this year, mandating female players to wear bikini bottoms “with a close fit and cut on an upward angle toward the top of the leg”.

The European Handball Federation (EHF) then issued a fine of 1,500 euros to the Norwegian team for a “case of improper clothing” in their bronze medal game against Spain at the European Championships.

The EHF said the shorts were “not according to the Athlete Uniform Regulations defined in the IHF Beach Handball Rules of the game”.

News of the fine prompted an outcry on social media, as opposition built to the decision. 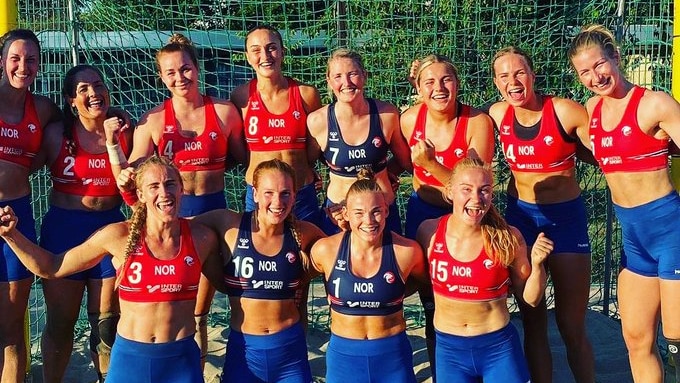 Lashing out against the game’s governing body on Twitter, pop star Pink says she is “proud” of the team for protesting against the “very sexist rules about their uniform”.

An Australian woman living in Norway, Talitha Stone, started a petition to overturn the IHF rules.

Her petition on change.org received 61,000 signatures.

Pop superstar Pink offered to pay the team’s fine at the time.

“I’m very proud of the Norwegian female beach handball team for protesting the very sexist rules about their ‘uniform’,” she tweeted.

“The European Handball Federation should be fined for sexism. Good on ya, ladies. I’ll be happy to pay for your fines. Keep it up.”

The new rules allow female players to wear “short tight pants with a close fit”, as opposed to the previous requirement for bikini bottoms.

“The [male] players’ shorts, if not too baggy, can be longer but must remain 10 centimetres above the kneecap”.

Ms Stone welcomed the decision by the IHF.

“I hope this is the beginning of the end of sexism and objectification of women and girls in sport, and that in future ALL women and girls will be free to participate in sport without fear of wardrobe malfunctions and sexual harassment!” she wrote on Twitter.

What Teachers Really Think During a Staff Meeting