Inflation is the topic du jour in global markets and investing. Will it overshoot or won’t it? Will it persist or won’t it? What will central banks do (or not do) about it?

The latest evidence came from the eurozone this week, where figures showed inflation rose sharply in May to 2 per cent – just above the European Central Bank’s target. Prices were pushed higher by a very strong rise in energy prices from a year ago and put inflation at its highest level since October 2018.

There has already been much agonising in print and volatility in the bond markets over the issue.

As for equity markets, they have so far taken the signs of emerging inflationary pressures in their stride. There has been a significant rotation into cyclicals and so-called value, at the expense of tech and other growth stocks, which has dented portfolios that have become overly weighted towards the latter. 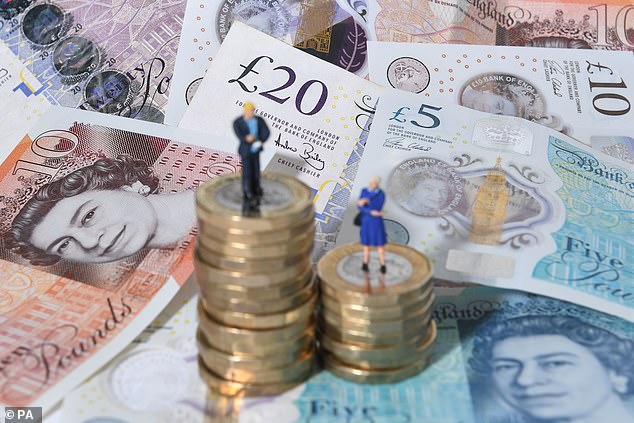 Inflation can decimate investment returns – but vehicles that promise an income can cover off that threat, with the hope of capital growth on top.

However, it seems that a spell of rising inflation alone is not going to spark a major correction. For that there will need to be evidence of persistent above-target inflation and a likely reaction from the monetary authorities – rate rises or other tightening looming closer than expected.

Then, the wisdom goes, the taper tantrum will hit markets.

All this speculation doesn’t particularly help the retail investor, but it doesn’t need to really: a sensible long-term investing horizon can almost ignore short and medium-term trends, like an inflationary cycle.

However, we are at an inflection point where weaknesses in portfolios will be exposed. Those packed with expensive growth stocks and funds will have noticed this over the last six months.

Cyclical stocks are certainly benefiting, though how much of the recovery is priced in and how long will it last? Will the current rotation into value be limited by a sense that structural changes in both real life and the investing world still favour quality, growth stocks and secular megatrends like renewables? 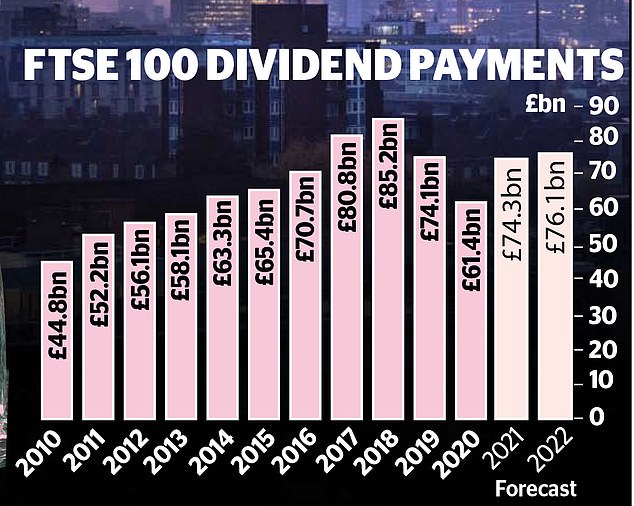 Good news for Uk equity investors: Dividends are due to make a comeback.

We are certainly in a commodities mini-boom, but is it the start of a new supercycle? How to replace that capital-preservation element of the portfolio that is now not so well served by government bonds? Bitcoin seems to be out of favour for the moment on that count.

So many uncertainties, even more than usual. One strategy at such balanced moments, is to keep a bit more in cash, so that if markets do plunge you can pick up some cheap investments. But that is akin to trying to time the market and opens up the danger of catching a falling sword, particularly for inexperienced investors.

As usual the soundest advice is don’t do much at all, if you are happy with the balance of your portfolio. If you are not, then now might be a good time to start adjusting it.

One happy development is the probable return of dividends, which particularly in the UK market, have been crucial to overall returns. Jason Hollands of Tilney BestInvest highlights the role that dividend reinvestment in particular has played in boosting the historic real returns on UK equities.

His chart shows that over 30 years the total return delivered from UK equities (as measured by the MSCI UK Index), including the impact of dividends reinvested, was 657.1 per cent. A £1,000 invested at inception in April 1991, with all dividends ploughed back in, would be worth £7,571 today. 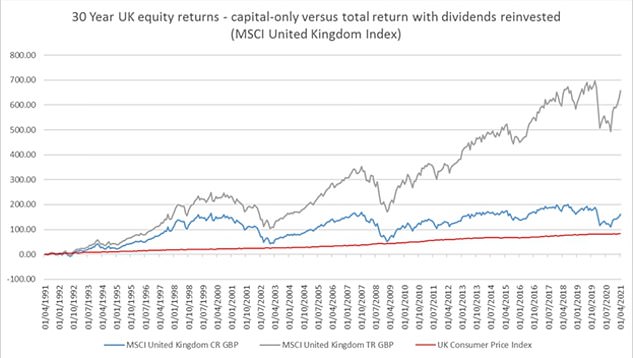 The top line shows the power of reinvesting dividends versus taking them as an income (blue line), and how inflation (red line) is far more damaging if dividends are not reinvested.

Had dividends been taken in cash, and not reinvested, then the investment would be showing a more modest return of 161.6 per cent today. So a very significant difference. But these are nominal returns.

The period measured was fairly benign for UK inflation, with an average annual rate of 2.05 per cent – far lower than the previous 30 years. But even so, says Hollands, it succeeded in halving the return on UK equities, excluding dividend reinvestment, from 161.6 per cent to 77.7 per cent.

In contrast, the total return – where dividends were reinvested – was reduced in inflation-adjusted terms by a much less damaging 13 per cent to 573.2 per cent. Hollands concludes that ‘most of the real return on UK equities has come from dividend investment’.

He suggests that it might be time for a comeback for equity income funds (see factbox below), which have fallen out of favour since Brexit and the pandemic, and been overshadowed by the the stellar returns on growth-orientated vehicles.

‘With profits expected to start to recover again and pay-outs resuming at many firms, but with inflation back on the radar, could it be time to reassess the case of dividend generating investments again?’ he asks.

‘While the yield on the UK equity market is at a relatively low level of 3.2 per cent compared to history – as a result of last year’s cuts – it nevertheless provides a healthy headroom over a 10-year gilt yield of 0.81 per cent and the most recent UK inflation reading of 1.7 per cent.’

Another complementary tactic is to take a look at the several hugely reliable income-focused investment trusts – and we look at that in more detail here.

Targeting a couple of vehicles that promise a good yield can offer a more secure protection against inflation than merely hoping that growth returns will do the job. Particularly once the power of compounded return – just like compound interest – over time is factored in.

Crucially, even if inflation doesn’t properly rear its head, it’s not as if these investments will be injudicious. Like small furry animals and Christmas, dividends aren’t just for inflation. 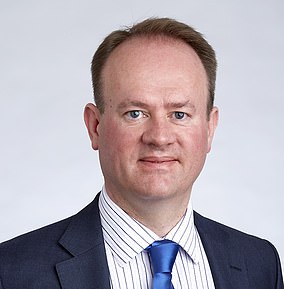 We have a preference for funds that do not dogmatically require every holding to generate an above average level of yield but instead focus on overall total return and the potential for rising dividends over time rather than a high pay-out rate today. For those contemplating investing in income-generating UK equity funds, three of our top picks are:

1. Threadneedle UK Equity Income (historical yield 2.7%). Longstanding income manager Richard Colwell takes a pragmatic approach to target both capital growth and income, rather than prioritising the latter. He will therefore invest in both quality growth companies that can compound their cash flows and stocks that he believes are undervalued with recovery potential. The fund currently has big positions in AstraZeneca (7.5%), Electrocomponents (7.4%), Imperial Brands (4.9%), GlaxoSmithKline (4.9%) and Rentokil Initial (4.7%).

2. Jupiter Income Trust (historical yield of 3.0%). Ben Whitmore is a contrarian investor, with a strong emphasis on identifying shares on attractive valuations but then overlaying this with quality criteria. The fund is predominantly invested in larger, blue-chip companies. Top positions include Aviva (5.9%), BP (5.4%), BT (5.1%), Kingfisher (4.7%) and Standard Chartered (4.6%).

3. TB Evenlode Income (historical yield 2.3%). Managed by Hugh Yarrow and Ben Peters, this is a concentrated portfolio of high quality UK-listed companies augmented with a handful of overseas names such as US firms Proctor & Gamble and PepsiCo. The team look for businesses with strong and predictable free cash flow and avoid more cyclical businesses and those that constantly have to plough shareholder capital into replacing assets such as plant and machinery. The fund has significant exposure to consumer brands. Big positions include Unilever (9.3%), RELX (7.4%), Diageo (7.2%), Reckitt Benckiser (5.9%) and Sage (4.9%).

Car insurer Brightside penalised me for its own mistake | Motoring

Why the U.S. dollar is soaring — and what’s next — after Fed’s change in tone

What Does Google's Healthcare Deal Mean For Future Stock Growth (And More)?

‘My wallet never leaves my bedside’: why cashless will soon be king | Consumer affairs

Lady Phyll on Moud Goba, the woman who changed her life

Car insurer Brightside penalised me for its own mistake | Motoring

Bob Huggins could enter emeritus status after 2021-22 season, but has no plans of retiring anytime soon

‘WKRP In Cincinnati’ Actor Was 79 – Deadline