We don’t always appreciate what’s on our doorstep. That’s certainly the case when it comes to Ireland — and it’s particularly relevant this year as airports report long delays and form-filling is still insisted on by some overseas countries.

There are no restrictions at all when visiting Ireland, and none when you return to the UK, either. All in all, it means Ireland is back on the tourist map: live music in pubs, legendary craic, majestic coastlines, rambling castles, historic towns, fresh oysters, soda bread — and pints and pints of Guinness, which always tastes far better there than it does anywhere in the UK.

All this is just a short flight or ferry hop away. We are leaving out Dublin because it needs no introduction. So follow our guide and discover one of the most beautiful, and certainly one of the friendliest, countries in Europe. 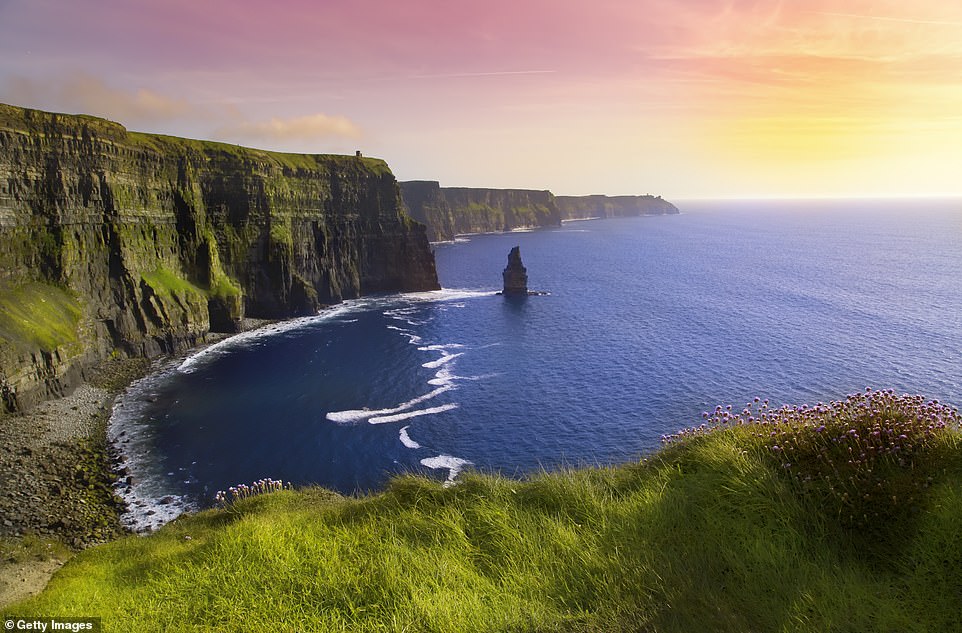 Irish charm: Scenically, County Clare is extraordinarily wonderful. Above are the county’s famous Cliffs of Moher 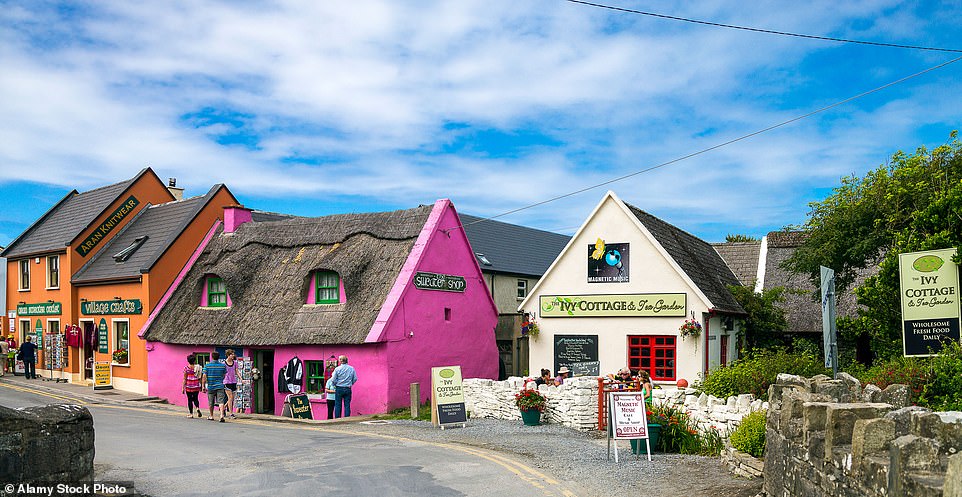 Splash of colour: The exuberantly painted houses of Doolin village – a haven for lovers of traditional music – in County Clare 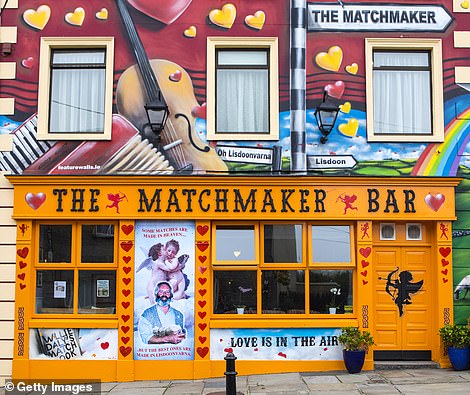 If you don’t fall in love with County Clare, you’re not trying. Scenically, it’s extraordinarily wonderful, from the steepling Cliffs of Moher to the great limestone escarpment of the Burren, and the dainty Aran Islands within easy reach. For lovers of traditional music, there is Doolin village.

For golfers, there is a gorgeous wind-swept links course at Lahinch.

For romantics, there is Lisdoonvarna, with its matchmaking festival every September. Accommodation is plentiful, but there is something to be said for staying inland rather than on the coast, perhaps at the likeable town of Corofin, near the romantically wooded Lake Inchiquin.

WHERE TO STAY: Two nights at the charming Corofin Lake Cottages, sleeping six, from £327 (booking.com). 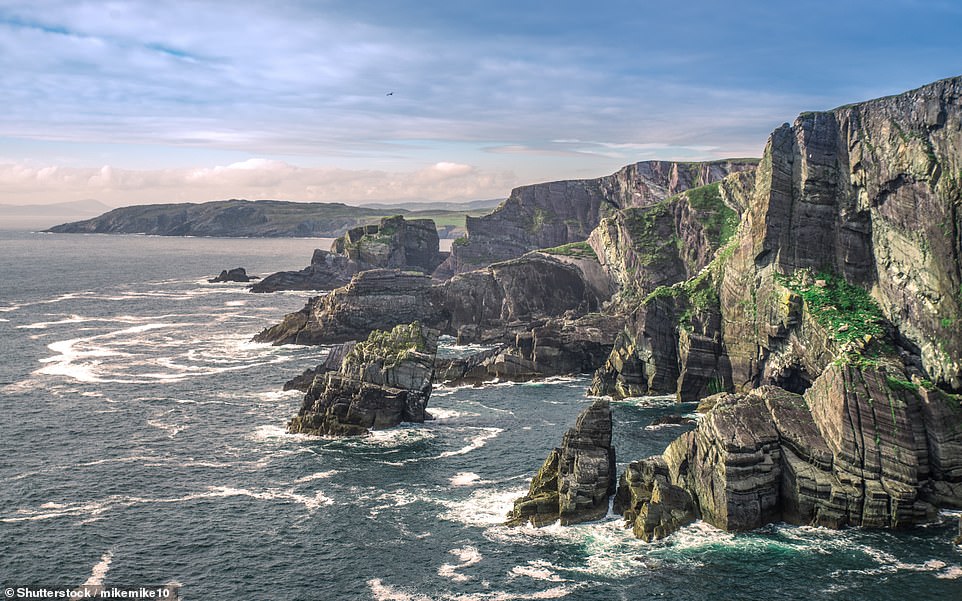 Cork’s Sheep’s Head peninsula, pictured, marks the southernmost point on the Wild Atlantic Way, which extends up the whole of the west coast 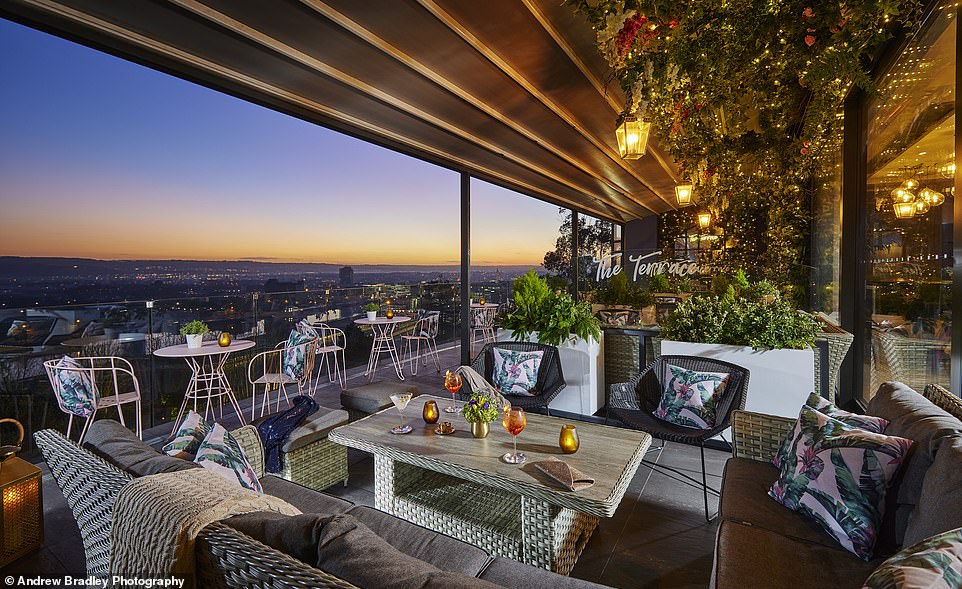 During your visit to Cork, enjoy a glass of bubbly on arrival at the Montenotte Hotel (pictured) 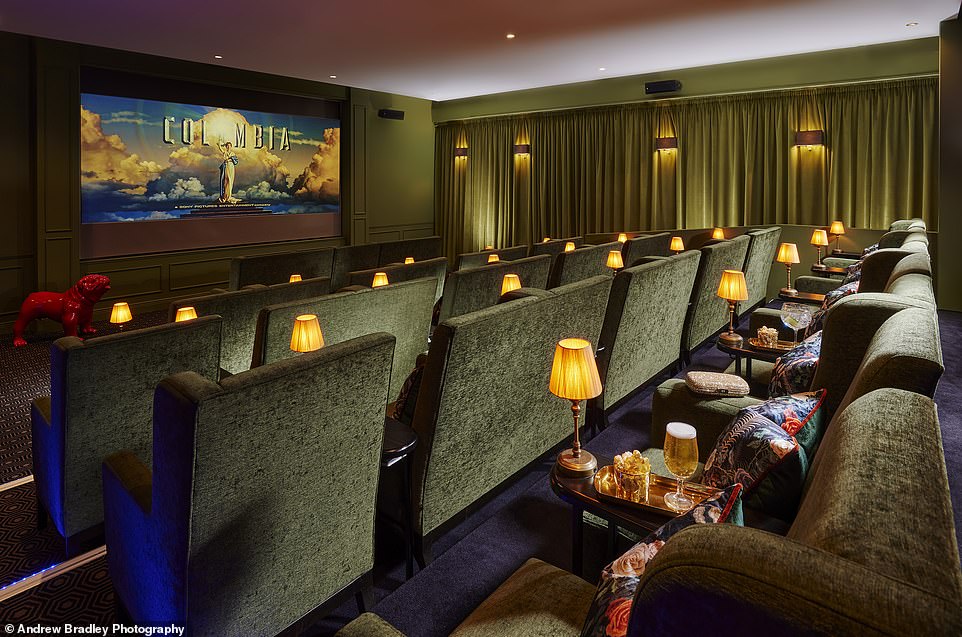 Above is the cinema room at Cork’s Montenotte Hotel. Bed and breakfast doubles are priced from £173

Cork is Ireland’s second largest city, and a great base for exploring the country’s south-west. After kissing the Blarney Stone at Blarney Castle, head west towards the Atlantic, where you will find craggy peninsulas, secluded coves, Bronze Age stone circles and walking trails rich in photo opportunities.

The pretty village of Durrus on the Sheep’s Head peninsula embodies the best of the region and also marks the southernmost point on the Wild Atlantic Way, which extends up the whole of the west coast (wildatlanticway.com).

DON’T MISS: A pub crawl in Cork, from the Shelbourne Bar to Costigan’s Pub via Mutton Lane Inn.

WHERE TO STAY: The Montenotte Hotel in Cork from £173 B&B, with a glass of bubbly on arrival (themontenottehotel.com). 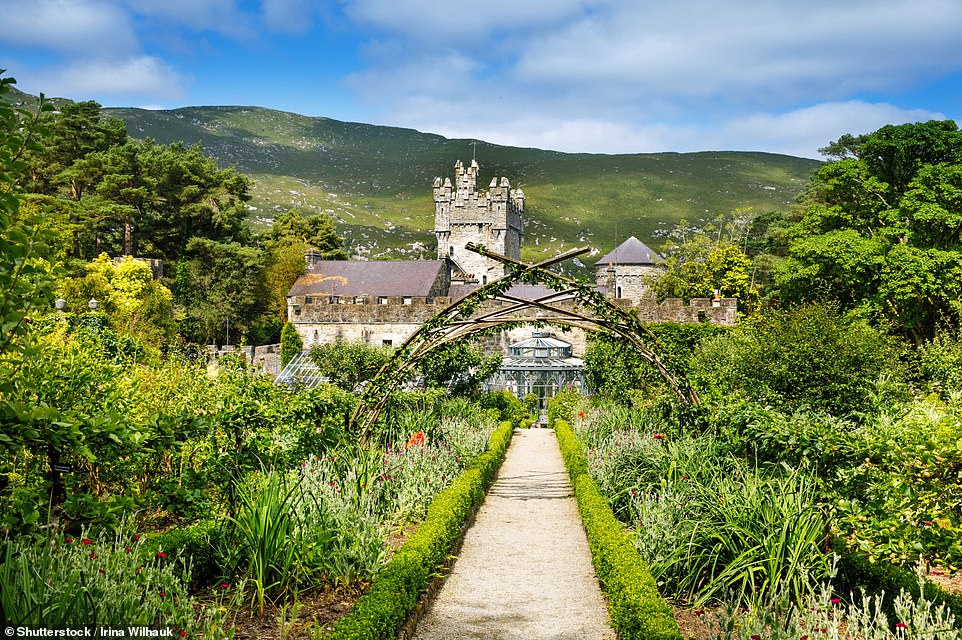 After a walk around the gardens (pictured) at Glenveagh Castle, stop for a brew at the charming tearoom 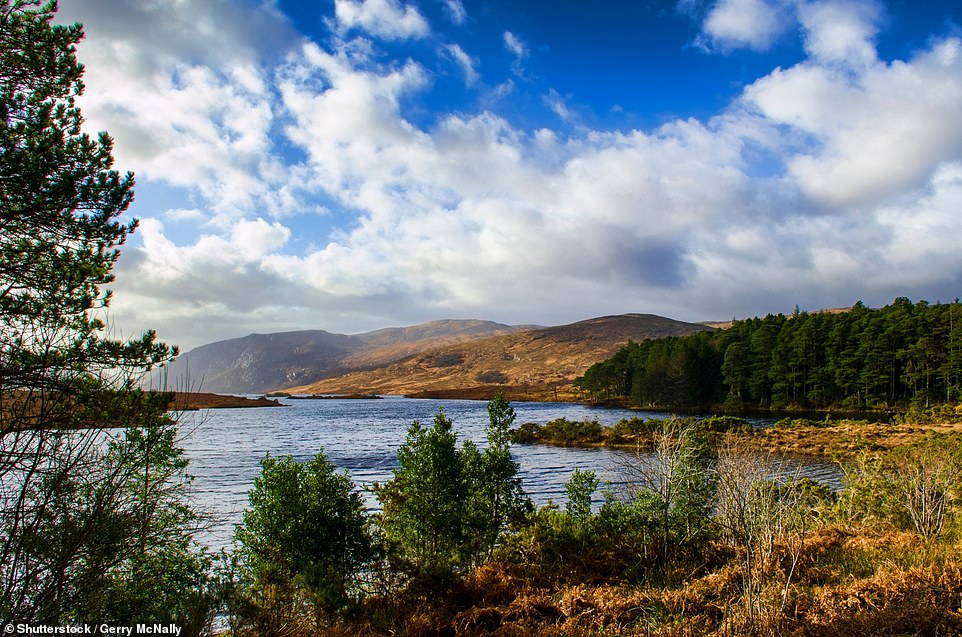 Above is the mighty Glenveagh National Park, one of the many attractions in the beautiful county of Donegal 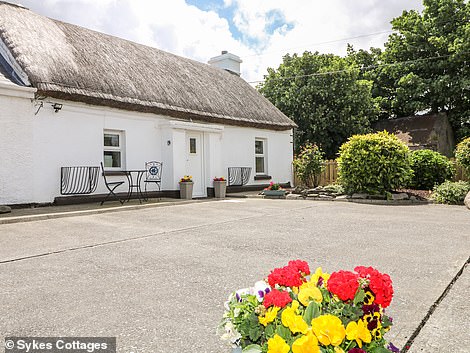 Check into the Whispering Willows cottage (pictured) in Carndonagh, where seven nights cost from £361

Arguably Ireland’s most beautiful county, against stiff competition, Donegal offers a thrilling combination of rugged hills, sheltered coves and vast sandy beaches. Donegal tweed is famous the world over, the region throbs with traditional music and, from the busy heritage village of Ardara to the pretty coastal town of Dunfanaghy via the mighty Glenveagh National Park, every corner of the county tugs at the heart-strings.

DON’T MISS: Tea at the charming tearoom at Glenveagh Castle after a walk round the gardens (glenveaghnationalpark.ie).

WHERE TO STAY: Seven nights at the Whispering Willows cottage sleeping two in Carndonagh from £361 (sykescottages.co.uk). 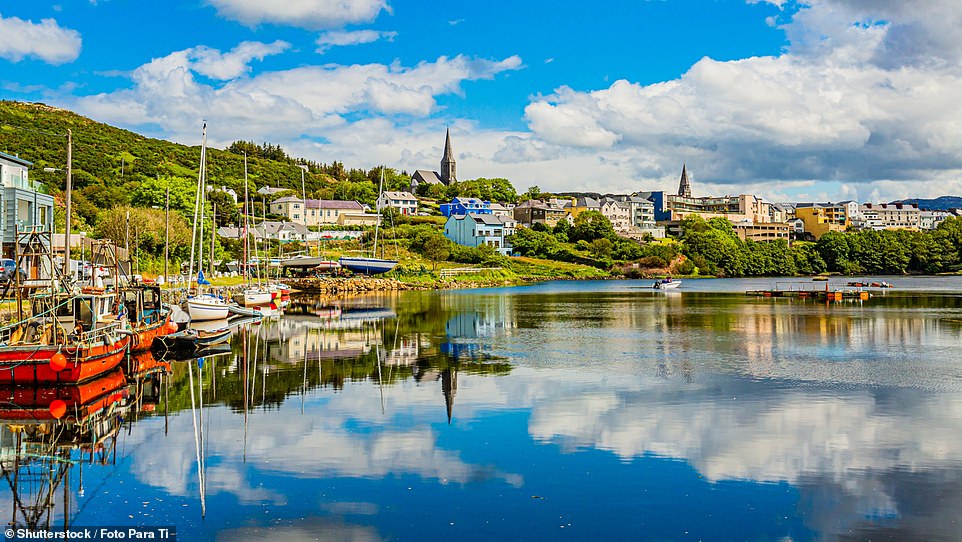 The main town in Connemara is Clifden (pictured), steeped in quirky history and nestling snugly between the Twelve Bens mountains and the ocean 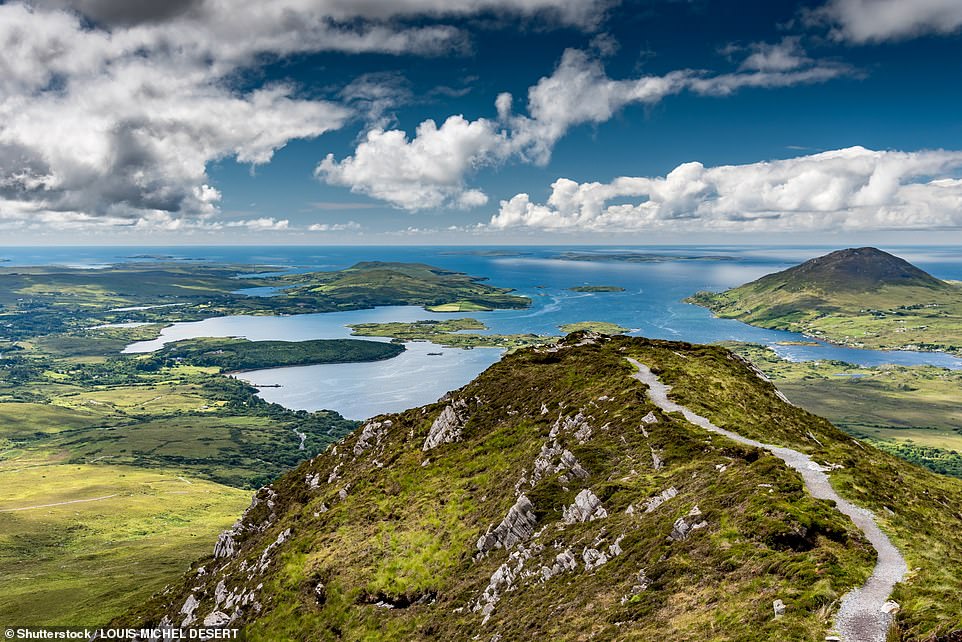 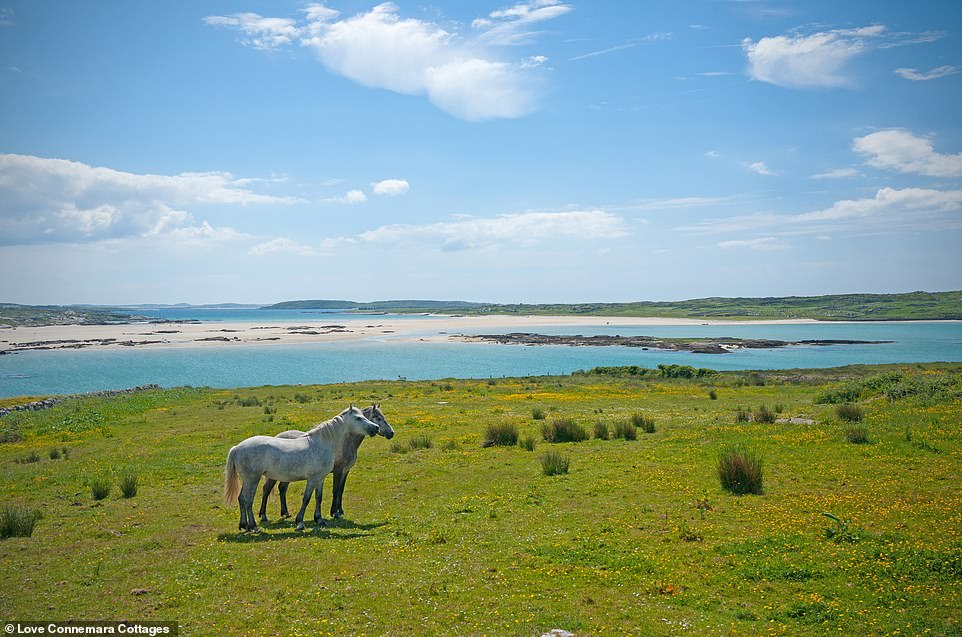 Seven nights at Cottage 201 near Claddaghduff village costs from £420. Above is a scene by the beach in the pretty west coast village 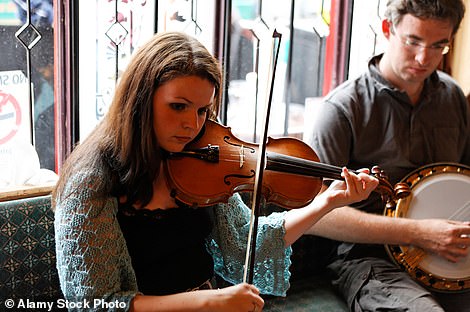 Traditional Irish music in a pub in Galway city, east of Connemara

Fabled for its ponies, peat bogs and traditional music, Connemara is a particularly delightful enclave to the west of Galway. It is like a microcosm of the mythical Ireland that time forgot.

Whether your taste is for watching the Atlantic waves crash against the Errismore peninsula or for hilly walking trails in the Connemara National Park, you will get an eyeful of five-star views. The main town in the region is Clifden, steeped in quirky history and nestling snugly between the Twelve Bens mountains and the ocean.

DON’T MISS: The ten-mile drive from Clifden onto the Kingstown Peninsula with splendid coast views (guidetoconnemara.com).

WHERE TO STAY: Seven nights at Cottage 201, sleeping four, near Claddaghduff village from £420 (loveconnemaracottages.com). 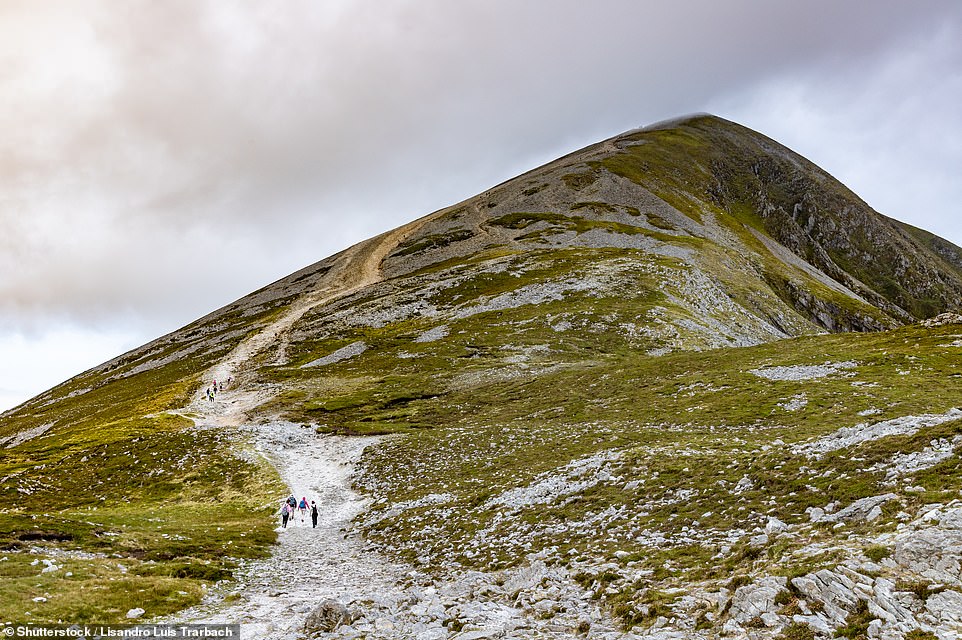 St Patrick fasted for 40 days on top of the magnificently rugged mountain of Croagh Patrick, pictured, in Mayo 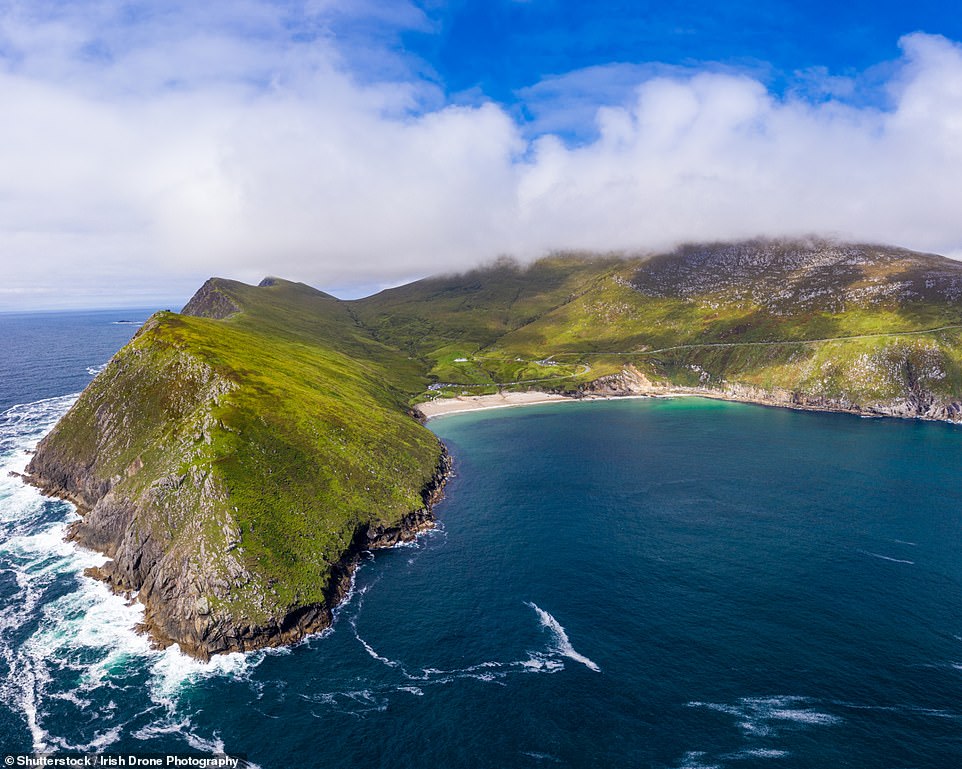 Pictured above is Keem Bay on the dramatically landscaped Achill Island, off County Mayo’s west coast 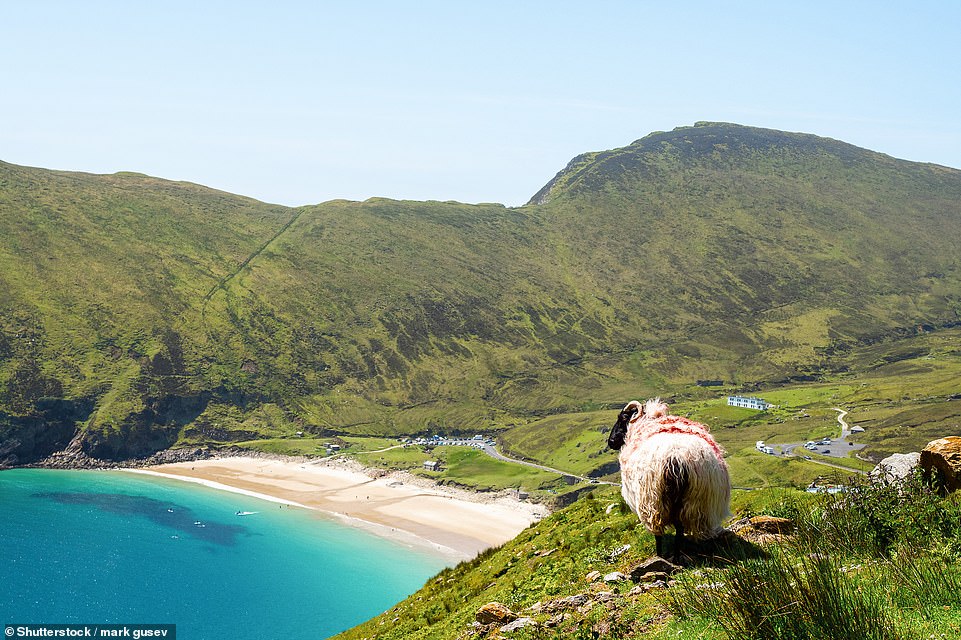 Baa-rilliant: Above, a sheep gazes down on the azure waters of Keem Bay 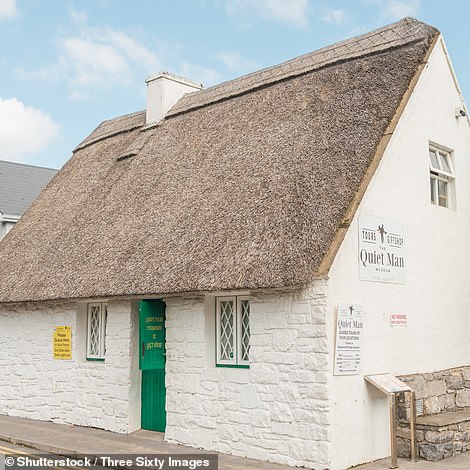 Above is The Quiet Man Museum in Cong, the village where the 1950s movie was filmed

St Patrick put Mayo on the map in the 5th century, when he fasted for 40 days on top of Croagh Patrick, a magnificently rugged mountain in a county with no shortage of them.

Other must-visit destinations in Mayo include the pretty Georgian town of Westport and tiny Cong, the village where The Quiet Man was filmed in the 1950s.

DON’T MISS: The Royal Abbey of Cong, the atmospheric ruins of a 13th-century Augustine monastery.

WHERE TO STAY: The Quay Holiday Apartment, sleeping two, is a 15-minute walk outside Westport and close to pubs and a beach, from £61 a night (holidaylettings.co.uk). 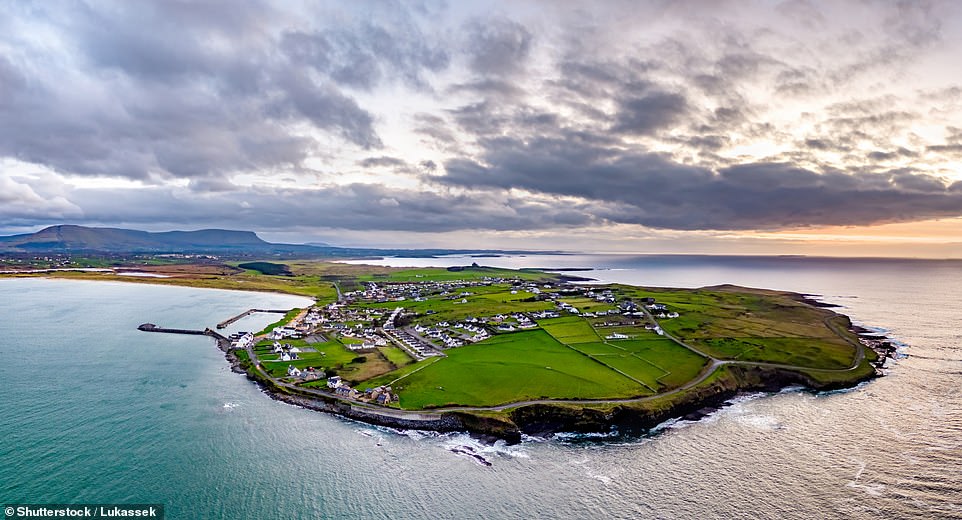 The pretty fishing village of Mullaghmore, pictured above, is among County Sligo’s many treats 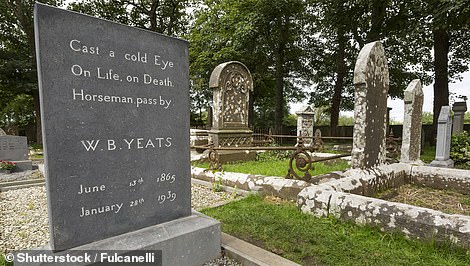 Anyone who got hooked on the BBC’s Normal People will be curious to see the county where Marianne and Connell grew up.

A lot of the filming took place around Tubbercurry — quintessential small-town Ireland with a suitably bonkers name to match.

Other Sligo treats include the pretty fishing village of Mullaghmore and the thrillingly uncrowded beach at Rosses Point.

For lovers of Irish culture of an older vintage, Sligo is also known as ‘Yeats Country’, and the grave of the poet in Drumcliffe cemetery is rightly a place of pilgrimage. 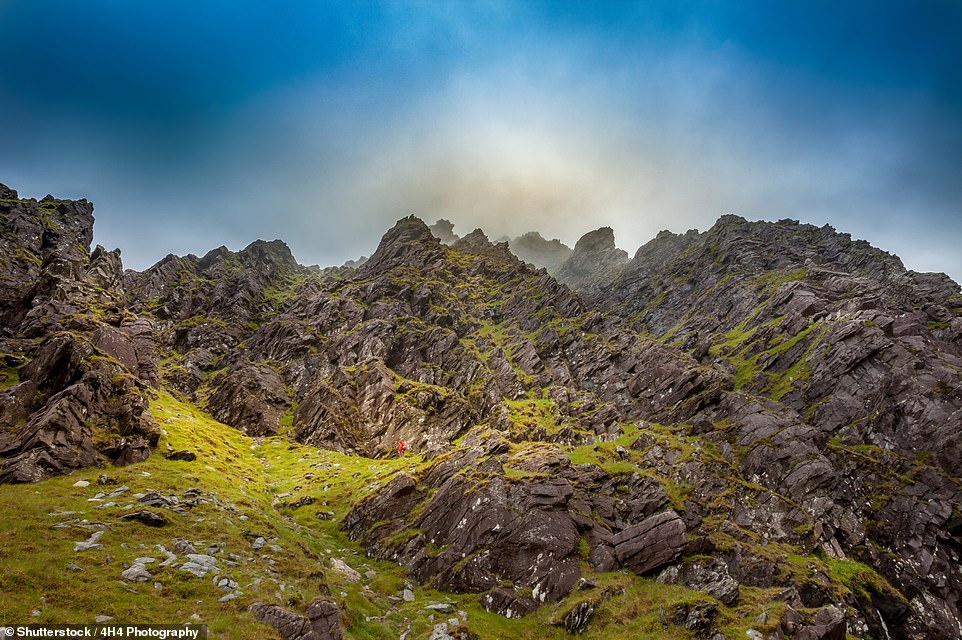 If you fancy a bracing mountain hike pre-Guinness, look no further than the majestic MacGillycuddy’s Reeks, pictured, in County Kerry 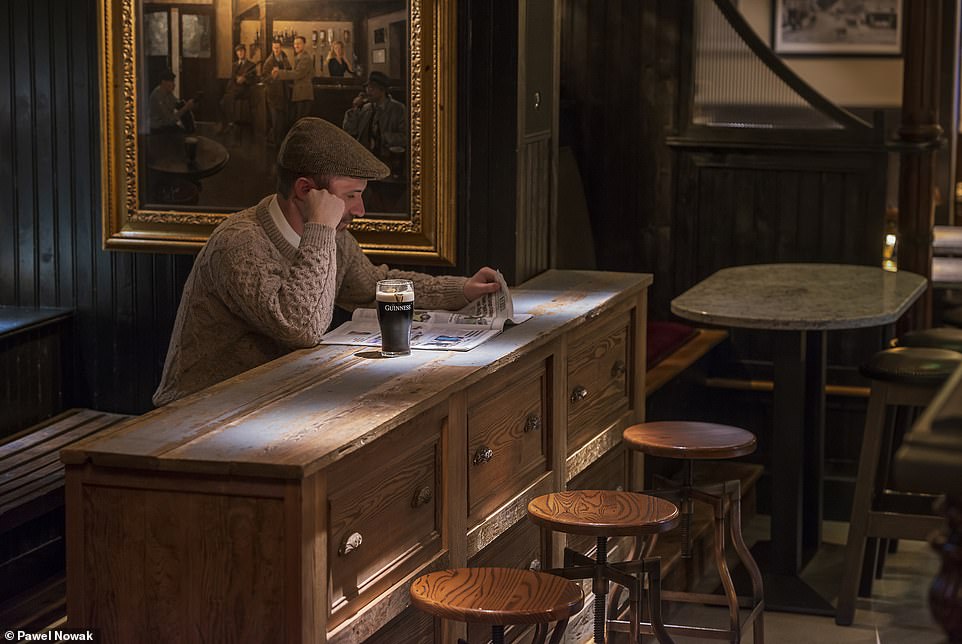 Check in to the Killarney Towers Hotel during your visit to County Kerry. Pictured is the hotel’s pub – O’Donoghue Public House 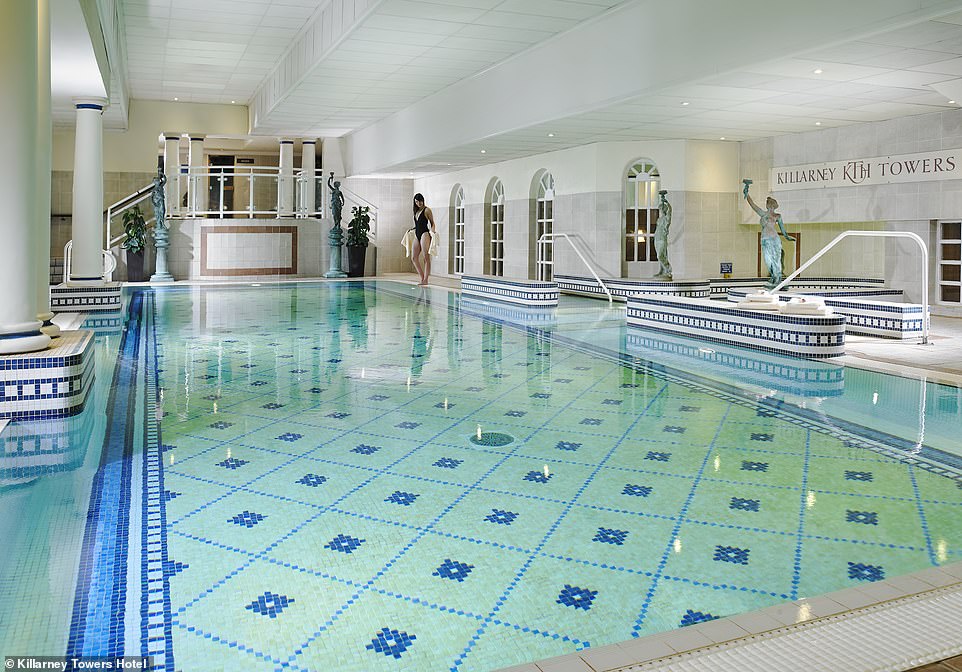 Above is the swimming pool at the Killarney Towers Hotel, where double rooms are priced from £98 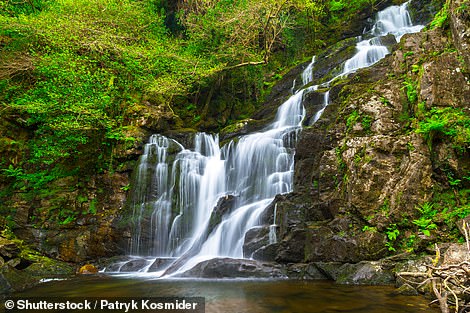 A waterfall in the beautiful Killarney National Park

The Ring of Kerry, winding imperiously round the Iveragh peninsula, can get congested in high summer, but there is so much to admire in this famously pretty corner of Ireland that it is worth adding to your shortlist. If you fancy a bracing mountain hike pre-Guinness, look no further than the majestic MacGillycuddy’s Reeks.

WHERE TO STAY: Doubles at the Killarney Towers Hotel in Killarney from £98 (theringofkerry.com).

County Louth has plenty to offer – Carlingford Lough, pictured, is extraordinarily easy on the eye, with the Mountains of Mourne for a backdrop 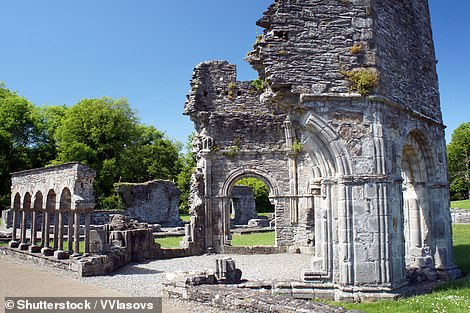 Explore the remains of Mellifont Abbey near Drogheda, the first Cistercian abbey in Ireland

Known affectionately as the Wee County, as it is the smallest in Ireland, County Louth has plenty to offer, and is easily accessible from both Belfast and Dublin. Carlingford Lough, on the border with Northern Ireland, is not just extraordinarily easy on the eye, with the Mountains of Mourne for a backdrop, but a magnet for bird-watchers. Louth’s two main towns, Dundalk and Drogheda, are steeped in so much history that, if you want to grasp the complexities of Irish politics, they make excellent starting points.

DON’T MISS: The remains of Mellifont Abbey near Drogheda, the first Cistercian abbey in Ireland (1152).

WHERE TO STAY: A night at one of the stylish self-catering apartments, sleeping two, overlooking the lough at Carlingford Marina from £210; bigger apartments available (carlingfordmarina.com). 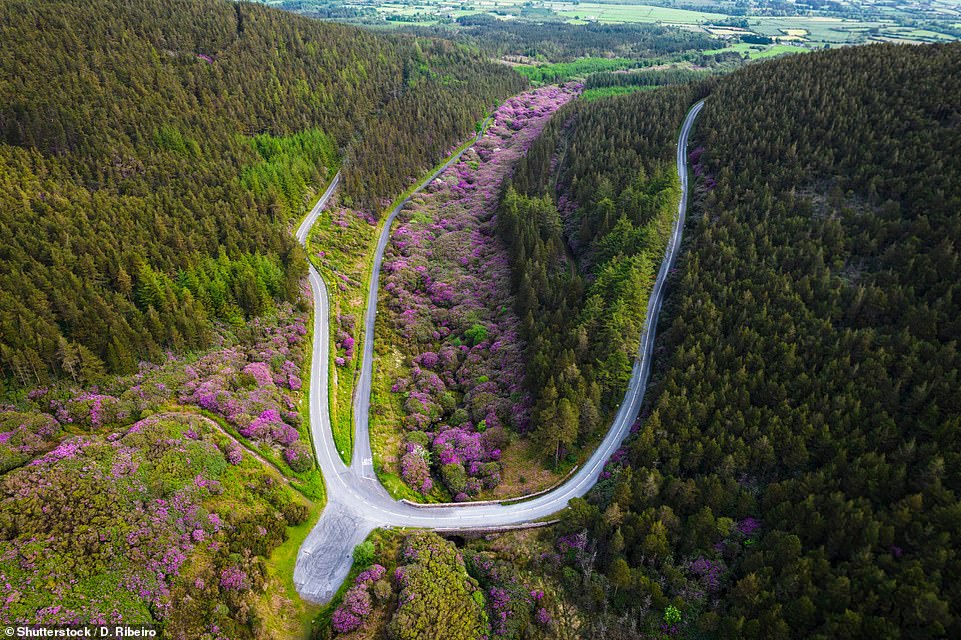 Head on a ramble in the towering Knockmealdown Mountains. Above is the Vee Pass on the Tipperary side of the mountain range

Easily accessible via the ferry to Rosslare, Waterford is yet another Irish county in which history and geography form a fascinating marriage. The cathedral city of Waterford, a rabbit warren of curiosities, was founded by the Vikings in the 10th century.

Further afield, the colourful Copper Coast, between Tramore and Bunmahon, will have amateur geologists purring, while Lismore castle is delightful. And what lover of wordplay could resist a ramble in the towering Knockmealdown Mountains, followed by a slap-up lunch?

DON’T MISS: A visit to the House of Waterford Crystal to see how the famous crystal is made (waterfordvisitorcentre.com).

WHERE TO STAY: Doubles at the stunning Cliffhouse Hotel in the village of Ardmore from £216 (cliffhousehotel.ie). 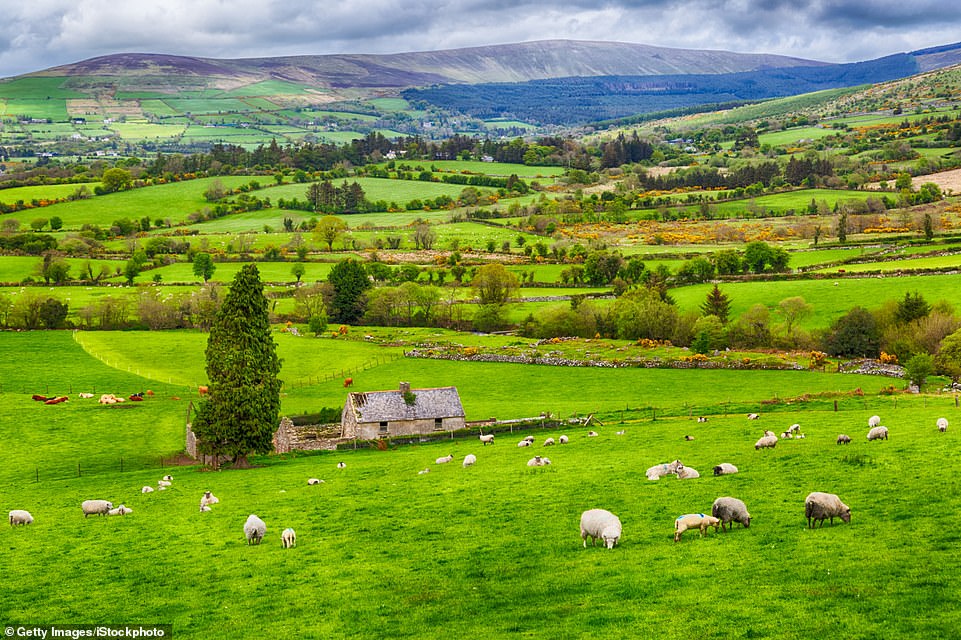 Green and pleasant land: Wicklow’s rolling fields. The county, set to the south of Dublin, is known as the Garden of Ireland 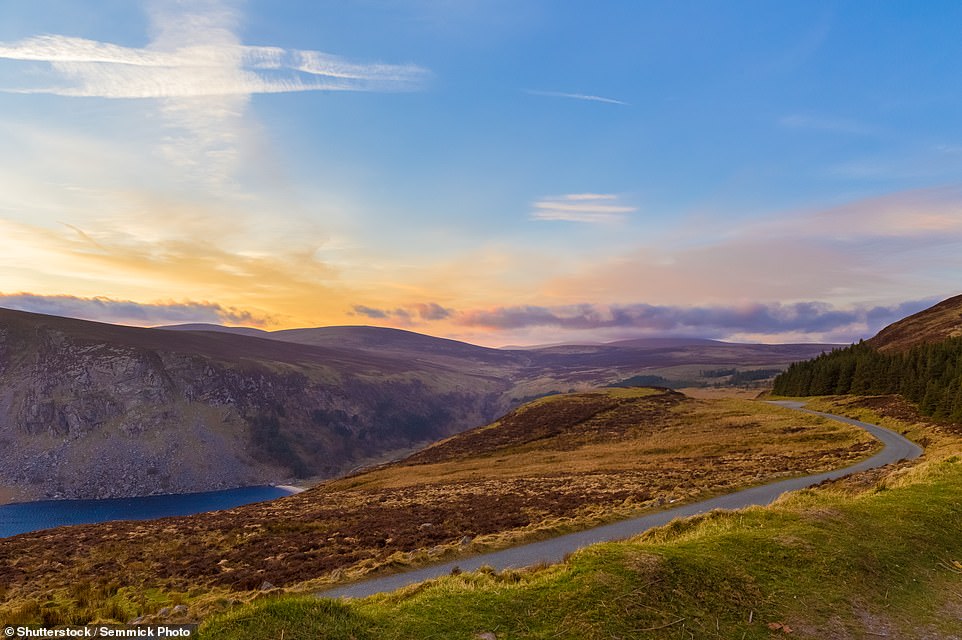 To make the most of your time in Waterford, trek through the heather-rich wilderness of the Sally Gap (pictured) 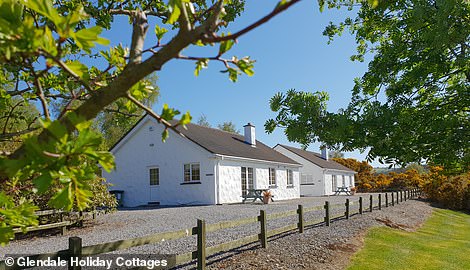 Spend a week at one of the Glendale Holiday Cottages, pictured, in a pretty rural setting near Glendalough National Park

County Wicklow, to the south of Dublin, is known as the Garden of Ireland. Whether your taste is for the heather-rich wilderness of the Sally Gap or the formal gardens of Powerscourt and Mount Usher, you are in for a treat. Head for the sea, at Wicklow Head, or inland to the valley of Glendalough, for a glimpse of the tranquillity that is quintessential Ireland.

WHERE TO STAY: A week at one of the Glendale Holiday Cottages, sleeping up to six, in a pretty rural setting near Glendalough National Park from £362 (glendaloughcottages.com).

Return ferry tickets from Holyhead to Dublin or Pembroke to Rosslare cost from £180pp based on two travelling by car (irishferries.com). Return flights from Stansted to Cork from £26 (ryanair.com). Car hire available from economycarrentals.com.

Doctors should be able to prescribe patients MASSAGES, Reiki and reflexology, say MPs

Charged EVs | Will Toyota’s new CEO bring the company up to speed on EVs?

Doctors should be able to prescribe patients MASSAGES, Reiki and reflexology, say MPs

Charged EVs | Will Toyota’s new CEO bring the company up to speed on EVs?