Is another drubbing in store for Dolphins against Patriots? 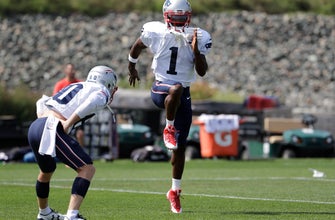 MIAMI GARDENS, Fla. (AP) — The spread between the New England Patriots and Miami Dolphins kept growing this week, just as it has been doing for years, and just as it is expected to do Sunday.

New England began the week as a 14-point favorite Sunday, and the number steadily rose to 18½, pushed higher partly by the prospect of Patriots newcomer Antonio Brown running free through a hapless Dolphins secondary. The signal sent by bettors: They expect a rout.

And no wonder. The defending Super Bowl champions drubbed Pittsburgh 33-3 in last week’s season opener, while the perennial also-ran Dolphins were humiliated by Baltimore 59-10.

New England-Miami could be the NFL’s biggest mismatch until Week 17, when they meet again in Foxborough. Here are things to know about the AP’s No. 1-ranked team versus No. 32:

The Dolphins couldn’t cover Ravens rookie Marquis Brown, so they might have trouble with his cousin.

Marquis Brown played only 14 snaps in his NFL debut but caught four passes for 147 yards and two scores against the Dolphins. Now they’re bracing for another member of the Brown family, this one a four-time All-Pro receiver who signed Monday with the Patriots.

“He’s as dynamic as they get,” Dolphins coach Brian Flores said.

Antonio Brown’s status was in doubt because of a civil lawsuit filed by his former trainer accusing him of sexually assaulting her on three occasions. Regardless of whether Brown plays, the Dolphins figure Tom Brady is especially eager to throw after watching them give up six touchdown passes against Baltimore.

The Dolphins and rookie coach Flores must shake off the shell shock from last week’s shellacking, the most lopsided regular-season loss in team history.

In the wake of the embarrassment came rumblings players are unhappy with the coaching staff, and with the organization’s decision to make next year’s draft a bigger priority than this year’s roster.

“I try to build relationships,” Flores said. “When you go through tough times, those relationships either get stronger or they don’t. Last week was a part of that. Hopefully we come out of this stronger.”

“That’s why we love the game — because we love challenges,” Flores said with a grin. “We love to compete. To me, this is fun.”

The Patriots had to tinker with their offensive line before the opener after center David Andrews was placed on injured reserve. Ted Karras, who spent last season as a backup right guard but played 16 games at center in 2017, took Andrews’ place.

More shuffling may be needed this week with right tackle Marcus Cannon recovering from a shoulder injury suffered against Pittsburgh. Joe Thuney, who normally starts at left guard, moved into Cannon’s spot following the injury. If Thuney stays in Cannon’s spot, candidates at left guard include Korey Cunningham and Jermaine Eluemunor.

Cunningham started six games at tackle as a rookie for Arizona. Eluemunor saw time at both guard and tackle for Baltimore the past two seasons.

Despite being big favorites, the Patriots insist they aren’t taking the Dolphins lightly. Part of the reason is the Dolphins have won five of the last six meetings in Miami. That includes last year’s stunner when Kenyan Drake scampered the final 52 yards after the Dolphins pulled off a pass and double lateral on the final play for a 34-33 victory.

“It’s a challenging place to play,” Brady said. “Last year I thought we played a pretty good game, but in football, a lot of crazy things happen.”

Flores worked for the Patriots for 15 seasons in a variety of roles, and was defensive play caller for last year’s Super Bowl champions. He said he thinks back often to his time with New England.

“This role is very different,” he said. “Back in those days, I was one of the guys. I’m not one of the guys anymore. I’m the guy everybody kind of walks away from.”

Best Diet for a Cat With Kidney Disease