Is Jim Carrey suing Will Smith? Actor weighs in on Chris Rock slap 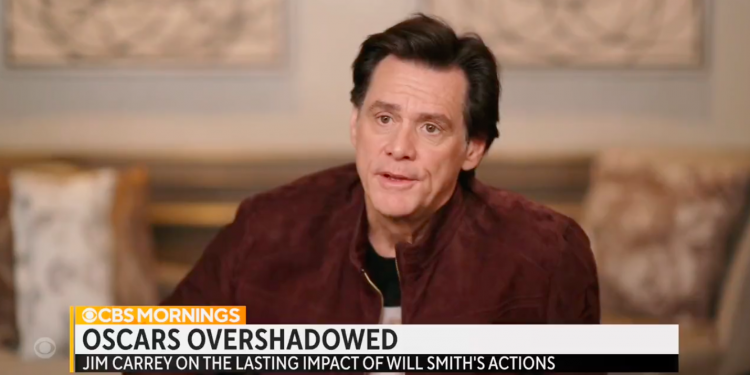 
Will Smith shocked the world when he walked up on stage and slapped Chris Rock at Sunday night’s Oscars 2022.

This came after the comedian made a joke likening his wife Jada Pinkett Smith’s buzz haircut to Jordan O’Neill from the 1977 movie G.I. Jane.

However, Jada’s short hairstyle isn’t a fashion choice and she recently opened up about shaving her head due to struggles with alopecia.

The distasteful joke sparked an emotional reaction from Will who took to Instagram the following day to apologise to the comedian.

In the aftermath, many celebrities have reacted to his actions, including actor Jim Carrey whose words on lawsuits have been misconstrued.

Jim Carrey is not suing Will Smith

During an interview with Gayle King on the breakfast show, he condemned Will Smith’s actions and discussed how he would have reacted if he was Chris Rock.

“I’d have announced this morning that I was suing Will for $200 million, because that video is gonna be there forever, it’s gonna be ubiquitous. That insult is gonna last a very long time,” he said.

Somehow, his words were taken out of context and internet users wrongly thought that he was actually suing Will Smith, but this isn’t the case.

He was simply saying that if he was Chris Rock, he would sue the actor for $200 million.

Jim Carrey had a lot more to say on the matter and continued to criticise Will Smith’s actions on CBS Breakfast.

“I was sickened. I was sickened by the standing ovation. I felt like Hollywood is just spineless en masse. It really felt like, ‘Oh, this is a really clear indication that we’re not the cool club anymore’,” he said.

The 60-year-old added that the Fresh Prince star “should have been arrested” but said that Chris Rock “doesn’t want the hassle” of filing charges.

“You do not have the right to walk up on stage and smack someone in the face because they said words… it came out of nowhere because Will has something going on inside him that’s frustrated,” he continued.

The Truman Show star added: “It cast a pall over everybody’s shining moment.”

Will took to Instagram on Monday (March 28th) to make a public apology to Chris Rock, viewers and Oscars staff.

“Violence in all of its forms is poisonous and destructive. My behaviour at last night’s Academy Awards was unacceptable and inexcusable,” he said in a statement.

“Jokes at my expense are part of the job, but a joke about Jada’s medical condition was too much for me to bear and I acted emotionally,” he continued.

The actor went on to personally apologise to Chris, writing: “I would like to publicly apologise to you, Chris. I was out of line and I was wrong. I am embarrassed and my actions were not indicative of the man I want I be.”

“I would like to personally apologise to the Academy, the producers of the show, all the attendees and everyone watching around the world,” he continued, apologising to Academy staff and viewers.

“I deeply regret that my behaviour has stained what has been an otherwise gorgeous join for all of us. I am a work in progress,” the actor concluded.

In other news, Meaning of April 2022 new moon as the astrological year begins

The inspirational story of Bhutan’s first Oscar nod: ‘Lunana: A Yak in the Classroom’

The inspirational story of Bhutan's first Oscar nod: 'Lunana: A Yak in the Classroom'