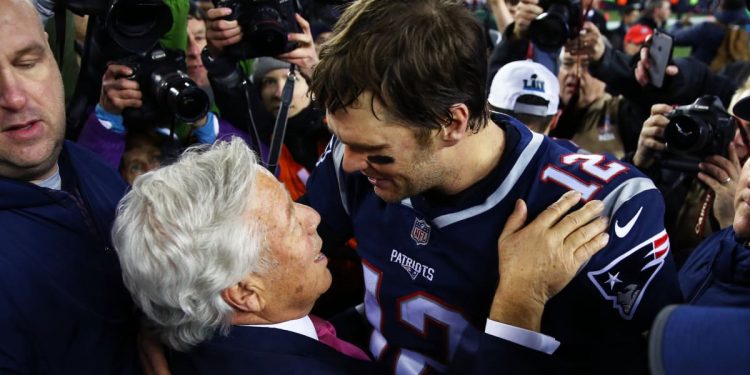 After 44-year-old future first-ballot Hall-of-Famer Tom Brady officially announced his retirement on Tuesday, a secondary storyline began to develop regarding the announcement itself.

Brady, who took to Instagram and Twitter to announce his decision to walk away from the game, did not thank the Patriots or mention the fans in New England once in his long announcement calling it a career.

As expected, this was a hot topic of conversation in the New England area, and the story has dominated the airwaves on local sports talk radio in Boston.

Was Brady’s omission thanking Patriots fans intentional? Did Brady just assume that thanking the fans when he left New England in free agency was enough?

Former Patriots linebacker Ted Johnson said on NBC Sports Boston that Brady’s omission of the Patriots in his announcement made Kraft “very upset.”

“[Kraft] was very upset, and he was screaming and he was yelling, and there was a temper tantrum he threw after reading this post,” Johnson said on Tuesday night.

However, Greg Hill of sports radio WEEI in Boston refuted the report on Wednesday morning, saying that he had sources that told him that the reaction was not nearly as explosive.

“I like Ted Johnson. Ted Johnson used to be a frequent guest on the old show. But suggesting that Robert Kraft had a temper tantrum yesterday would fly in the face of any information that I perhaps had shared with me yesterday,” Hill said.

“I thought it was odd that Tom Brady did not mention the Patriots or Robert Kraft or Bill Belichick or the fans, but that the relationship remains good between Tom Brady and the Krafts. So I heard nothing of the sort about a temper tantrum,” Hill continued.

For what it’s worth, Kraft posted a message on Instagram on Tuesday in which he mentioned that he will “always feel a close bond to him and will always consider him an extension of [Kraft’s] immediate family.”

Brady reposted the message on social media, thanking the Patriots and their fans later in the day.

Anna Duggar Spotted at Party Hosted By Josh’s Parents: Have They Ended Their Feud?