Is Tesco the next private equity takeover target?


Is Tesco the next private equity takeover target? Grocer is ‘most attractive’, claim City analysts

By Tom Witherow And Mark Shapland For The Daily Mail

Tesco could be swooped up by private equity despite its mammoth £19.8billion valuation, analysts said.

In a note to clients, asset management giant Alliance Bernstein said the supermarket – led by chief executive Ken Murphy – was its ‘top pick’ for a takeover as its shares are cheaper than UK rivals and it completed a turnaround under former boss Dave Lewis.

Bernstein believes Tesco has honed in on its ‘dominant’ UK market, following the disposal of businesses in Asia and Poland, leaving the business ‘leaner and more focused’. The ‘strong store estate’ is also backed up by strong own-brand products and a successful loyalty programme with Clubcard. 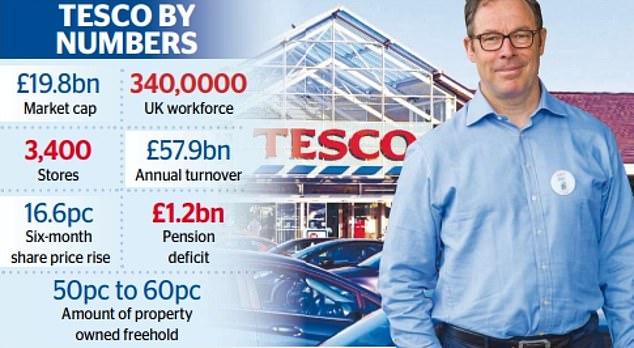 Target?: Alliance Bernstein said the supermarket – led by chief executive Ken Murphy (pictured) – was its ‘top pick’ for a takeover as its shares are cheaper than UK rivals

William Woods, an equity analyst specialising in the European food sector at Bernstein, said: ‘We think it is the most attractive at a fundamental level.

The turnaround is complete, the business is simplified, diversified and dominant, and the next five years are set to be a story of consistent, strong execution and returning to shareholders. Tesco’s online sales are now £4.5-5billion and profitable, driven by scale and operational excellence, and further asset disposals are possible.’

Retail expert Andrew Busby added: ‘Provided the appetite is large enough, it [a private equity takeover] would make a lot of sense. If you look at the top four, we know what happened with Asda, Morrisons is spoken for and I wouldn’t touch Sainsbury’s with a barge pole, so that only leaves Tesco.’

A sale of Britain’s largest supermarket to private equity would permanently change the landscape of British supermarket shopping, affecting around 20m customers and thousands of suppliers.

The size of a prospective deal would make it one of the largest private equity takeovers in UK corporate history.

Only a handful of the world’s largest private equity firms, such as Blackstone, KKR and CVC, would have the firepower to finance such a move.

A leveraged deal would typically require between £2billion and £6billion of cash to take the food giant private, placing a prospective deal alongside the monster buyouts of Alliance Boots in 2014 (£10.9billion) and Cadbury in 2010 (£11.9billion). Tesco also has a £1.2billion pension deficit, in contrast to the £760m surplus at Morrisons.

Private equity has swooped on Britain’s under-valued supermarkets meaning Sainsbury’s and Tesco will soon be the only remaining publicly listed ones.

Shares in Sainsbury’s jumped 15 per cent last week, however, after rumours that US firm Apollo was considering a bid, although the risks around its Argos and banking business are thought to be enough to put suitors off.