Could there be such a thing as a World’s Best Ski Hotel? A certain establishment in the heart of Verbier, that rarefied Elysium of winter sports resorts, thinks so. And by its own reckoning, the best ski hotel in the world is itself.

To be fair, the lazily-named W has won the prestigious title of World’s Best Ski Hotel at the World Ski Awards for seven years in a row, including at this year’s awards (and Verbier won World’s Best Ski Resort 2022, the second year in a row it has claimed the accolade ). But stay there for two nights, as I did with my fiancée recently, and it’s clear that the hotel wholeheartedly endorses the judgment.

The eye-watering prices, for one thing, are the sort of rates charged only by a hotel convinced of its own superiority. The lavish indulgence of space – huge windows overlooking the beautiful mountains, large halls filled with modern art and quirky photo booths, a wide forecourt ranked with supercars – demonstrates the swagger of a World’s Best. And all the terrifyingly casual staff smile all the time, particularly when they’re speaking, when it’s a dazzle of tan and teeth.

A hotel, I think, has its own character. If the W was a man, it would be a Euro jetsetter, a trust fund type with swept-back playboy hair and a shirt that shows a bit of chest. You’d find it smoking a cigar and guffawing on the pavement outside a Mayfair club in the small hours of a Saturday morning and taking a credit card payment for the privilege. If it was a woman, it would be glamorous and vicious, with high heels that would pierce the tarmac without compromising their shine. If it was a dog, it would be an onyx-black Labrador with a very glossy coat and gourmet tastes. But it is none of these things. It is a hotel and it wants your wallet. 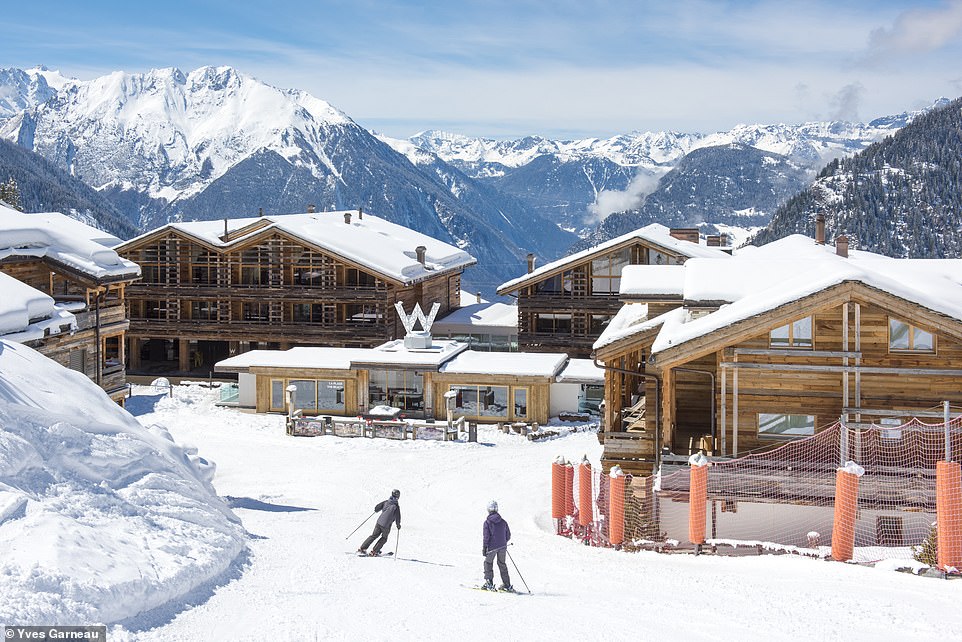 The W Verbier (above) has won the prestigious title of World’s Best Ski Hotel at the World Ski Awards for seven years in a row, including at this year’s awards. Jake Wallis Simons checks in to check it out

Is it worth handing it over? Let’s start with the location. From the plate-glass windows, or the wonderful wooden balcony with cradle-seats and attentive, smiling cocktail waiters, you can see the glittering mountains stretching out beneath you like a scene from early Bond.

The cable car from the station bisects the sky, depositing skiers in sleek, tailored gear very close to the hotel. Stroll through the cavernous hall with the modern art, up a few shallow, carpeted steps and past the subtly-positioned reception desks – nod to the casually-dressed receptionist and accept her white smile – and onto the supercar-studded forecourt, and the ski lifts to the pistes are about 20 steps away. In the height of winter, you can ski directly into the hotel.

Then there are the rooms. They are done up in that high-end European style that is all bright colours, surprising windows between bathroom and bed, sliding screens, minimalistic desks and plates of carefully-positioned strawberries and chocolate on arrival. You just know it was designed by an architect with silver hair and spectacles with bright yellow, chunky frames. 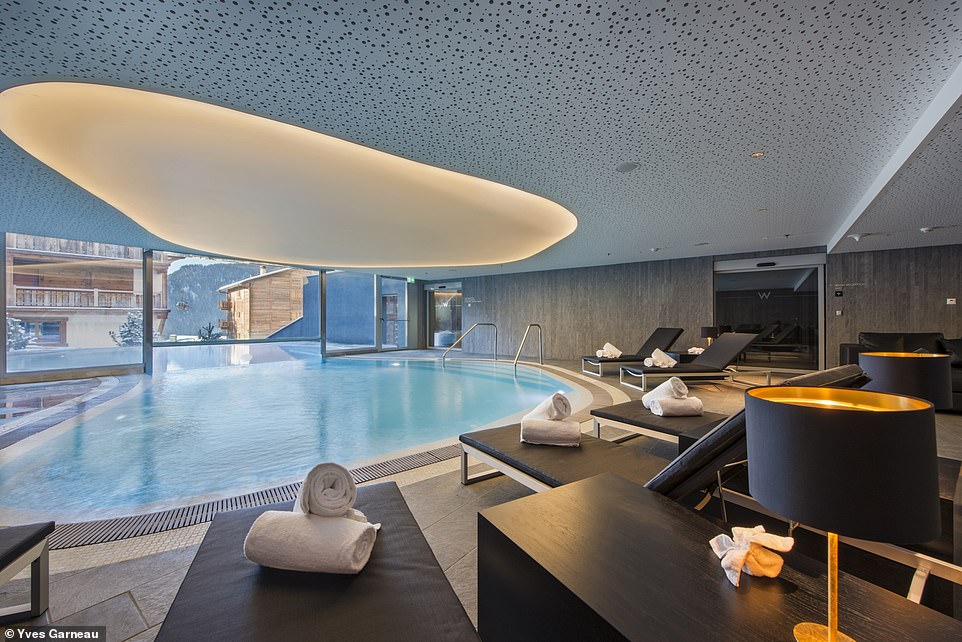 Jake writes: ‘A hotel, I think, has its own character. If the W was a man, it would be a Euro jetsetter, a trust fund type with swept-back playboy hair’ 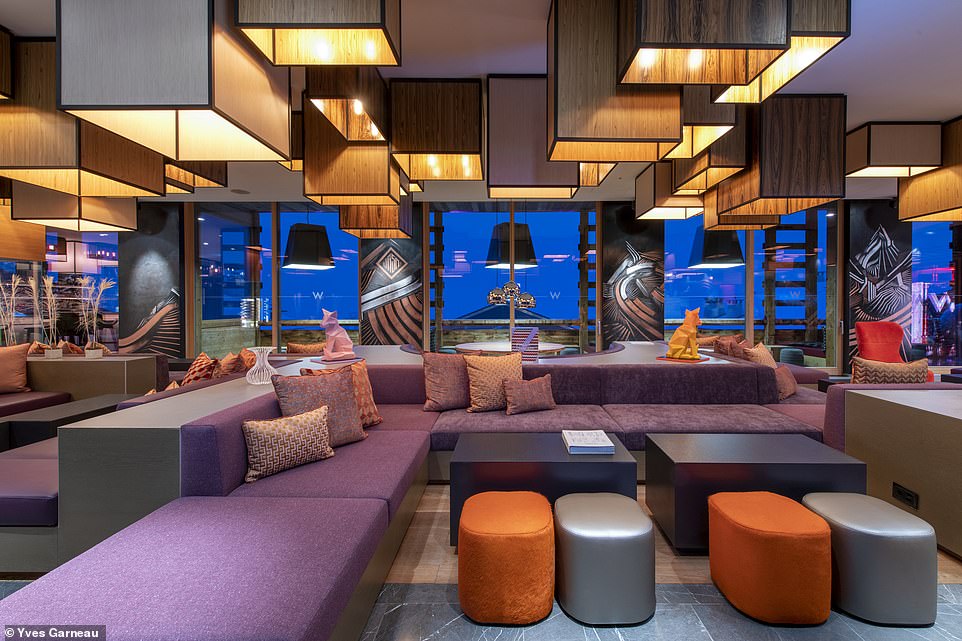 The guests at the W Verbier? Some are ‘super-rich’ and ‘internationally recreational in their weltanschauung’, says Jake

The room given to my fiancée and me was probably the smallest in the hotel – the grandiose debauchery of space is reserved for the lavish foyer and the rooms inhabited by the sheikhs.

Which brings me to the clientele. After spending a bit of time relaxing on the wide balcony overlooking the mountains, and dining in the restaurant, with its waiter that explains the story of the food with a smile – about which more later – I arrived at a conclusion about the customer base that I believe to be accurate.

Broadly speaking, there are two groups. The much smaller group consists of a community of people who live a life consistent with the W’s level of luxury. These people are super-rich, internationally recreational in their weltanschauung. A hotel named after a letter of the alphabet, which charges a suitcase of cash for a night, to them, is normal. 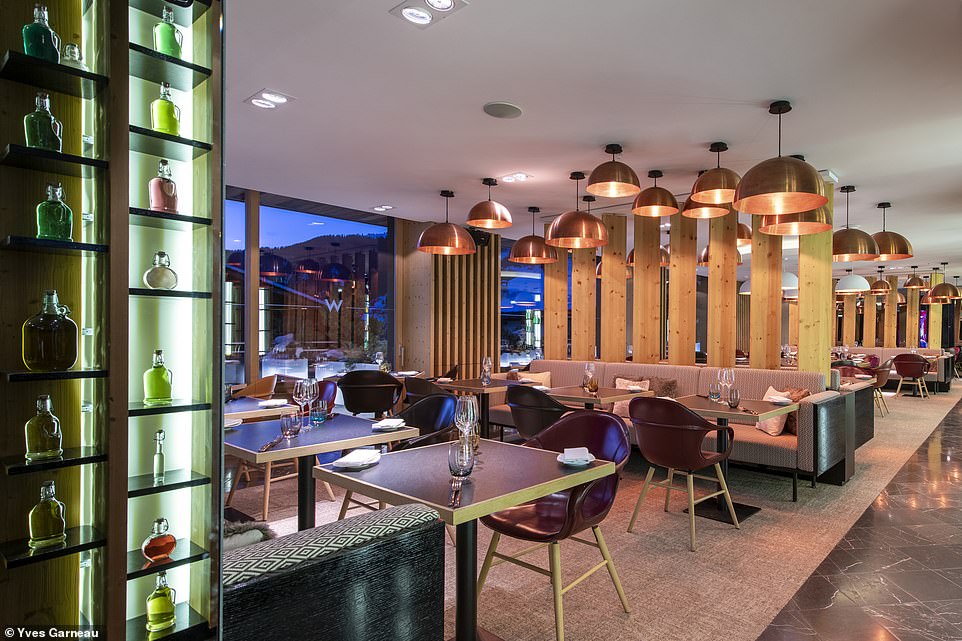 The W Verbier, says Jake, serves breakfasts ‘that makes you wish your stomach was several times the size’ 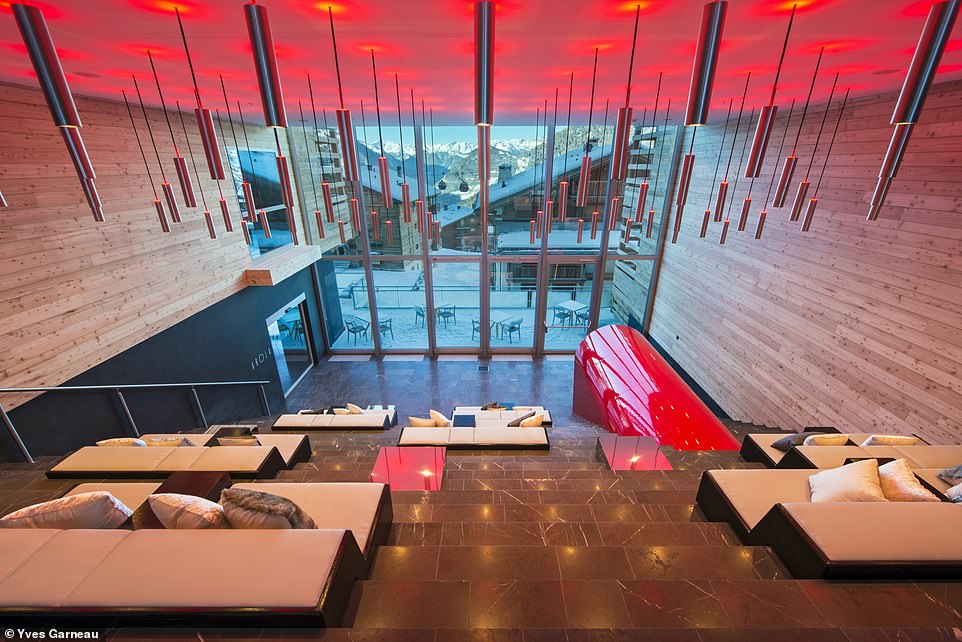 ‘All the terrifyingly casual staff smile all the time,’ writes Jake, ‘particularly when they’re speaking, when it’s a dazzle of tan and teeth’

The second, much larger group, is at the hotel as a treat. It is populated by members of the upper-middle classes blowing 600 euro for an anniversary or who have booked a dinner at the restaurant without checking the prices and are trying their best not to feel uncomfortable. These people look dressed to impress and they frequently flick their eyes to the left or the right, seeking out the smaller group that belongs here, speculating on the sources of their wealth, marvelling at their fingerspitzengefuhl and trying to imitate their style.

(The sources of their wealth, of course, is something we had better not discuss here.)

To the slopes! After the sort of breakfast that makes you wish your stomach was several times the size – such is the bewildering array of food, all of which you want to eat, and the sight of which leaves you feeling slightly guilty in a way you do not understand – you get dressed in your ski clothes and amble down to the boot room. 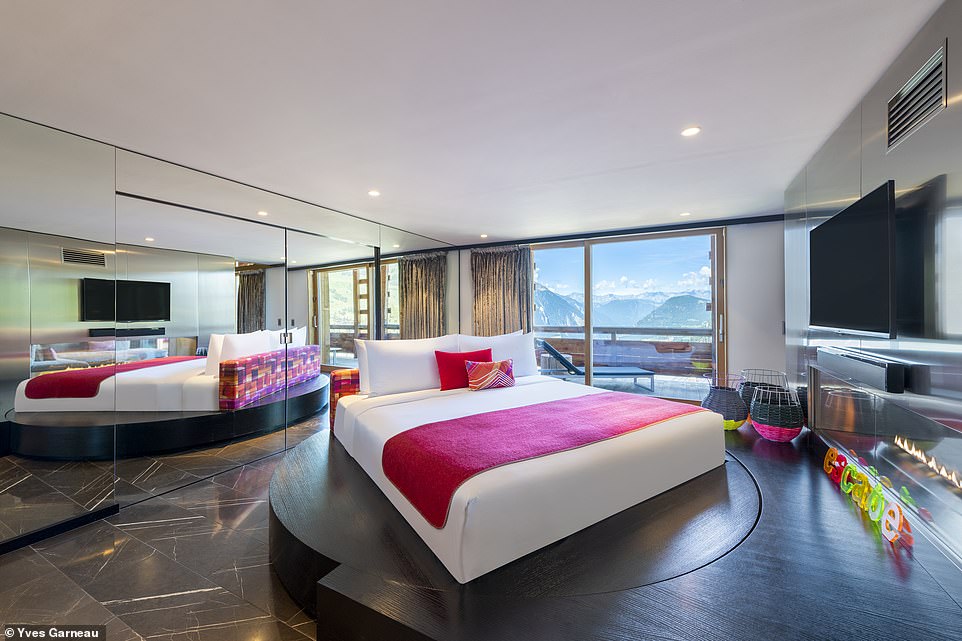 ‘The rooms (Wow Suite pictured) are done up in that high-end European style that is all bright colours, surprising windows between bathroom and bed, sliding screens, minimalistic desks and plates of carefully-positioned strawberries and chocolate on arrival,’ writes Jake 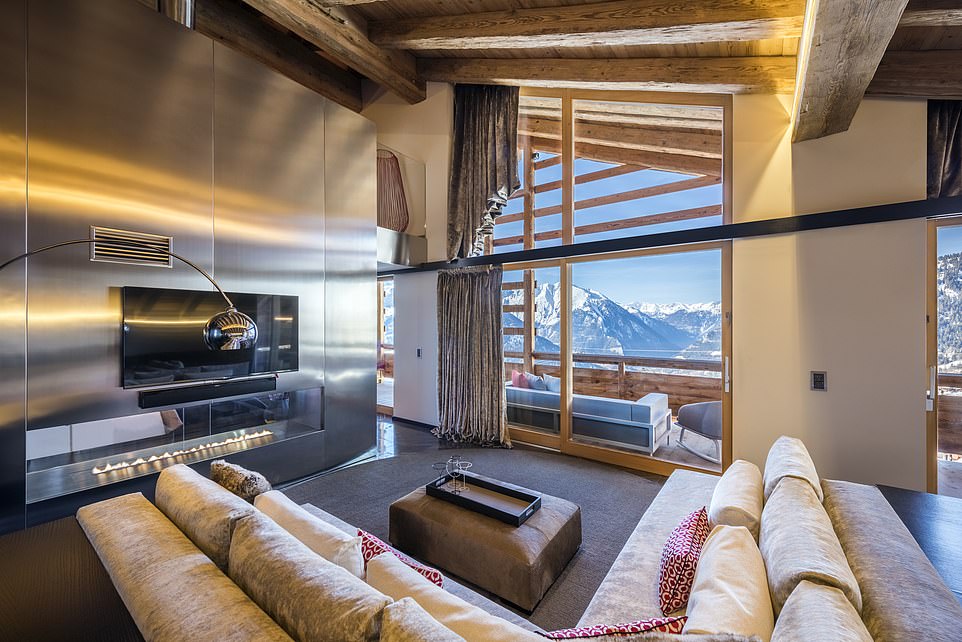 Jake says of the rooms: ‘You just know [they were] designed by an architect with silver hair and spectacles with bright yellow, chunky frames’ 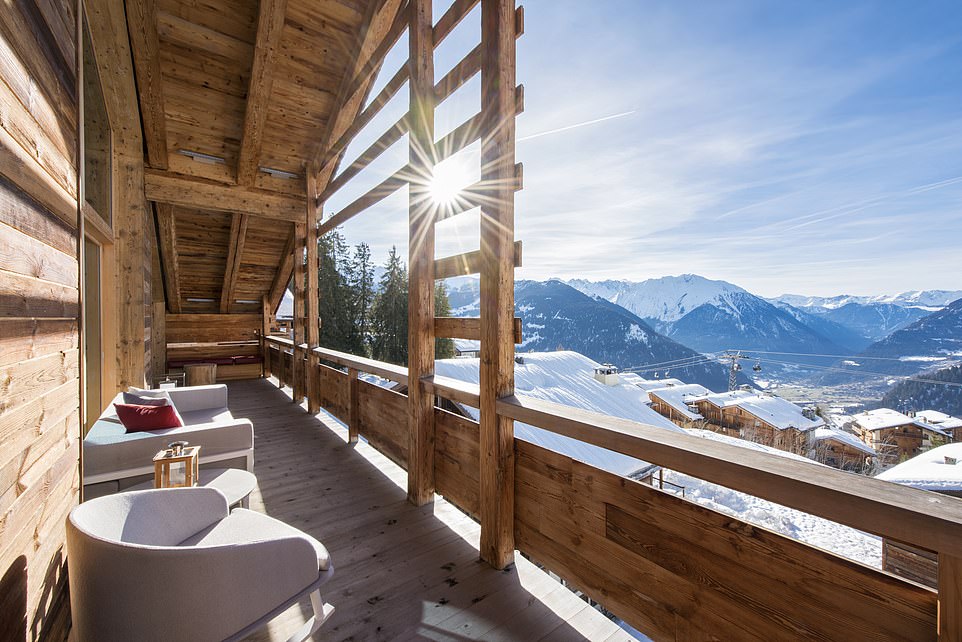 The ski lifts to the pistes are about 20 steps away, reveals Jake. Pictured is the amazing view from the Wow Suite

Strangely, the boot room, where your skis are held in a rack and your boots on shelves, is the one part of the hotel that does not speak of luxury. It speaks of the municipal sports centre changing room.

We also visited the four-star Hotel de Verbier down the road, and the boot room at that much smaller establishment – which has never been voted World’s Best – included lockers equipped with lovely, heated pegs on which to hang your boots, helmet, gloves and so on. Not chill racks and shelves.

But the W is closer to the slopes. Clip-clop over the road, your skis hoisted on your shoulder, and you are at the cable car leading up the mountain. There you meet your ski instructor – we used a few from the nearby Altitude Ski School and they were brilliant – and take off into the blue.

The skiing in Verbier is beyond compare. 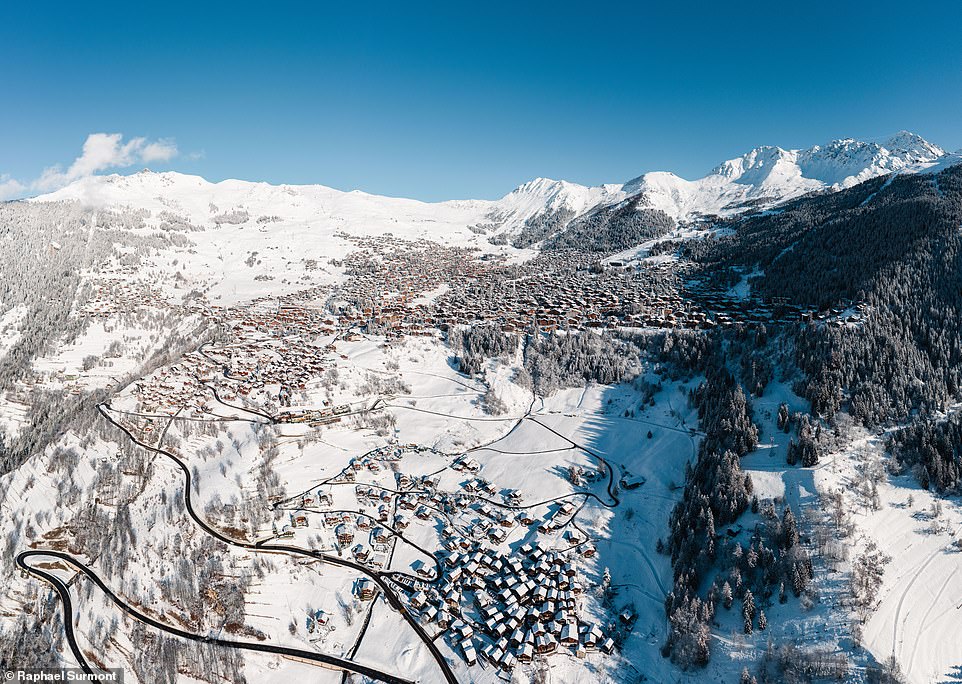 The skiing in Verbier (above) is beyond compare, says Jake, who describes the slopes as a ‘delight’

The pistes are all pisted, as it were, meaning that the black runs are free of moguls (which you can find if you venture off-piste with fat skis). The slopes are a delight, from the broad, friendly blues to the perky reds to the narrow, steep blacks. Some of the lifts are sponsored by Prada, including the one nicknamed the ‘James Blunt’, who locals claim was once fellated on the lift in the chilly air at an altitude of about 100 feet.

There are wonderful restaurants and cafés all over the place and you see impossibly elegant Swiss carving beautiful lines along the hard icing of the snow, followed by a collection of children who look like they were born on skis.

Yes, Verbier as the World’s Best Resort I can get behind, even though you feel your money evaporating minute by minute. 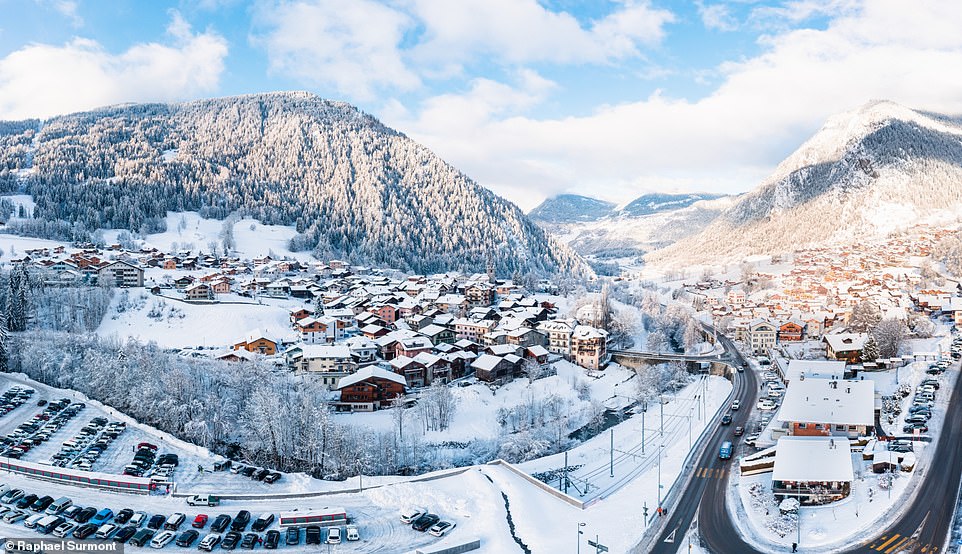 Jake writes: ‘There are wonderful restaurants and cafés all over the place and you see impossibly elegant Swiss carving beautiful lines along the hard icing of the snow, followed by a collection of children who look like they were born on skis’

As Simon Wiget, director of Verbier Tourisme, told me: ‘Verbier is the ultimate destination for a ski holiday par excellence. We have the best hotel, the best resort and the best snow. Come and join us!’

But the W as the World’s Best Ski Hotel? It depends what you like, I suppose.

Pierre-Henri Bovsovers, the general manager of the hotel, said: ‘It is thanks to the professionalism and passion of our talents, as well as the trust of our owners that [winning the World’s Best award] is possible.

‘We are constantly seeking to improve, whether it is in terms of service, infrastructure or the hotel’s facilities, we are always willing to go the extra step and we make the satisfaction of our guests our number one priority.’

OK. But take, for example, the restaurant. A high-end menu comprised of international cuisine, beautifully presented. A wine list that struts its stuff in the stratosphere of financial success. Subtle, smiling waiters with great fingerspitzengefuhl. You could be anywhere on the jetset circuit, and I suppose that’s why they like it. The circuit, wherever it exists, is their home. 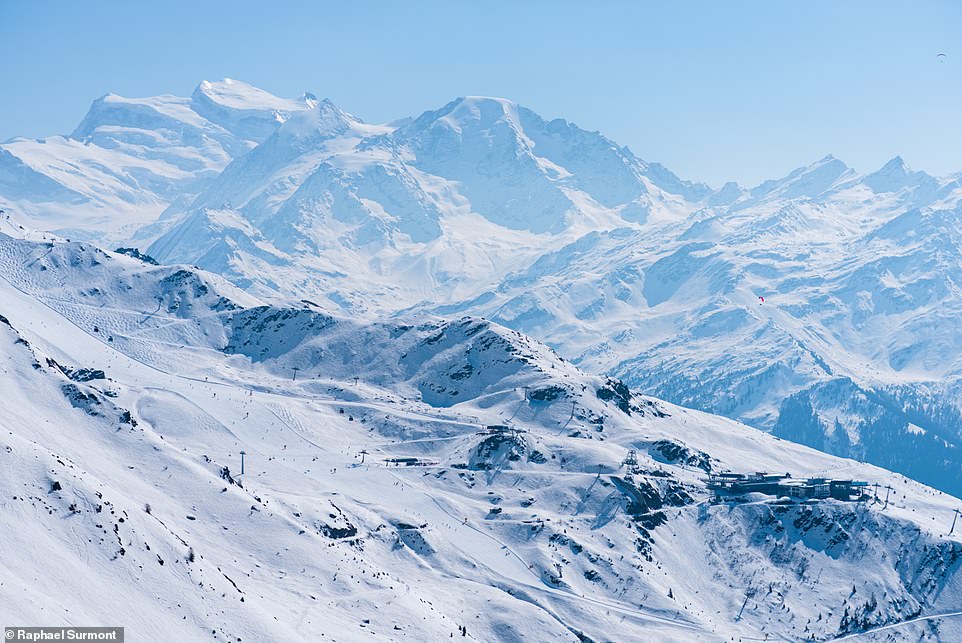 But elsewhere in Verbier you will find rustic restaurants that serve raclette, which comes as a panel of grilled cheese on a plate, accompanied by a small, padded bag full of boiled potatoes, which you eat with the cheese and feel ghastly and wonderful.

Elsewhere in Verbier you will find Swiss wine, which isn’t that amazing but you can boast about it upon your return. Elsewhere in Verbier – even in Verbier, which surely must also be the World’s Most Expensive Resort – you will find bars that feel Swiss, and hotels (like the cosy Hotel Verbier) that feel Swiss, and you will have a sense that you are in Switzerland, and you will enjoy that nourishing synergy between Dasein and geography. You get none of that at the W.

World’s Best? I don’t know. It’s a matter of taste. But personally, I’d forgo a World’s Best for a Switzerland’s Best any day of the week.

Jake was hosted by W Verbier, where rooms, at the time of writing, are priced from around £450 per night per room.

PROS: Proximity to the slopes. The swank factor. Ski-in-ski-out in winter. Your every need is catered for. Nice spa.

CONS: Expensive. Basic boot room with no heating or lockers. Anonymous luxury. You could be anywhere in the world.

SWISS operates up to 180 weekly flights to Switzerland from London Heathrow, London City, Manchester, Birmingham, Edinburgh (seasonal during summer) and Dublin from as little as £59 one-way (Economy Light fare only includes hand luggage). Sport equipment can travel at attractive prices with the all-inclusive fares. Visit swiss.com.