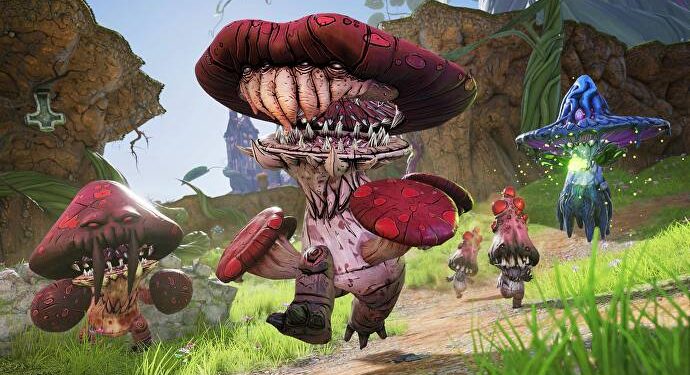 
Giant mushrooms twist about each other, rising like trees as they block out the sunlight. Corrupted crystals bleed from the earth, glinting with malice. Mist circles your feet as you stand in the Banshee’s lair. Captain Valentine’s voice rings out: ‘Watch out, she’s going for a total party kill!’ What do you do next?

Well, you grab your shotgun, of course, and run head first into a chaotic battle of green slime, loot boxes, and unicorns! This is Tiny Tina’s Wonderlands… Dungeons & Dragons if it accidentally got into all of the blue Smarties, mixed that with a barrel load of energy drinks, and led you through a fever dream campaign. And it leaves you kind of looking forward to next week’s session.

I came to Wonderlands as someone who loves Dungeons & Dragons, but has never completed a Borderlands game. I’m in multiple weekly campaigns – both DMing and playing – I have more dice than any reasonable person needs, and my shelves are lined with Beholder statues and Wizkid minis. So when I saw Borderlands was taking its popular Assault on Dragon Keep DLC and turning it into a full blown game, complete with TTRPG on the side, I knew I had to grab some fellow nerds and jump in.

Like starting any RPG, tabletop or otherwise, the first step is making a character. The classes in Wonderlands are obvious hints to those in 5e: Brr-zerker is your barbarian who can become ‘enraged’; Stabomancer is your rogue; Spellshot is a wizard who even has an ability called ‘polymorph’. There’s also a Spore Warden which very much feels like a reference to the Circle of Spores druid. Basically, you won’t feel out of your depth picking a class here.

Even the character sheets you glimpse in the background are basically carbon copies. Strength, dexterity, wisdom, intelligence – the only stat difference is swapping charisma for attunement. Which is the first glimpse of Wonderlands major difference to the TTRPG. This is a game about combat, and combat only. Forget Faerie Fire and Leomunds Tiny Hut – hell, even Cure Wounds – Wonderlands is about fighting evil head on by bashing it in the face with an axe.

However, that’s rushing past the next most important step: character design. Dungeons & Dragons is near infinite in the colourful and creative ways you can put together a character, mechanically, but also aesthetically. Wonderlands understands that to an extent: you don’t pick from fantasy races but mix elements of them such as orcish and elven faces, feline pupils, reptilian eyebrows. So you can absolutely create a party of players that look different from each other, but I spent a good hour playing around in menus and never really felt satisfied. Maybe it’s the eternal curse of wanting princess tresses in a digital medium that doesn’t find them easy to make, or perhaps it was the one basic set of armour and limited hair colour options that made the whole thing just feel lacking.

Though, by the time you get out into the game, the character you make ends up not mattering. Wonderlands seems to get the desire to make a custom character from D&D fans, but this openness means you could make literally anyone and it’s basically meaningless. And in something that’s meant to reference a role-playing game that feels kind of disappointing.

It would probably be better if they created a set of distinct heroes to pick from (like in regular Borderlands titles) so you could really embody someone and their place in the world, instead of being a random personality-less entity. Yes, you have various snappy voice lines, but that’s not enough when you play D&D. From that angle, it’s hard to even call Wonderlands a role-playing game when you’re used to the tabletop kind.

Dungeons & Dragons also very much lives and dies on who you play with – friends are an essential part of the experience. In Wonderlands there are NPCs playing as other characters in your party, but they’re only ever voices; you don’t see their minis on the map or their characters in fights. They throw in quips every now and again, but mostly you feel kind of alone in your journey. Even when a friend jumps in for co-op play, it doesn’t make much difference to your game. They too are a vague character that could really be anyone or no-one. You only ever feel like part of a team when you cut back to the table and see other people sitting with you, the eponymous Tiny Tina leading you.

But despite feeling all of this, Wonderlands still managed to charm me. This is Borderlands. This is a video game. This is not Dungeons & Dragons. Wonderlands doesn’t try to feel like playing D&D because it knows it never will be, but it absolutely gets the game we all love.

It’s bursting with references. It’s a full blown, soppy love letter to D&D pages and pages with a ton of post scripts. Gearbox clearly adores D&D. It has a wonderful mix of playing in the fantasy world, with the meta stuff of sitting around a table with your friends pretending to be something you’re not. Part of the game is played on an overworld that is meant to be the physical map on your table, where you move your minis, complete with dice scattered in random places and bottle tops dropped in the middle of a path.

Then there’s the beginning of boss fights where your vision swirls back to ‘real life’ and Tina pulls out a terrifying mini, slamming it on the board. It’s exactly the feeling of playing with friends as you blend imagination with the joy of knowing you’re playing a game with friends. None of it is real, it’s a weird magical journey you all agree to take together.

Plus, the world is beautiful. The cel-shaded Borderlands style has translated into a magnificent vision of towering rainbow castles in medieval towns to glistening lakes at the heart of a forest. A lot of care has been put into making the world at least feel like running around in a D&D game. Yes, it has vending machines (and obviously many, many guns), but none of them ever actually feel out of place.

The neon tavern signs and metallic lanterns are designed to perfectly fit within their surroundings. It’s also the kind of meta stuff you add in with friends when playing. I’ve accidentally referenced a vacuum in a game that became canon tech with a magic twist. These kinds of real world hints are some of my favourite parts of getting meta with friends. Plus, it’s very much a Terry Pratchet science/fantasy feel, where magic glimmers from within the lights that suggest a perfectly reasonable fantasy explanation.

And yes, there are guns. But as someone who plays a rifle-wielding artificer with a metal Chow Chow in tow, I can very easily forgive them. They come with steampunk stylings and shoot sheets of ice or streams of acid more often than any kind of bullet. They basically make you a very efficient wizard or sorcerer with magic distilled into the perfect killing machine.


All of this is to say that I don’t think Gearbox set out to make a game that feels like playing Dungeons & Dragons, but they did look around at their friends one night, the shouts of joy as a natural 20 rolls, the well-used minis crafted from Lego or plastic dinosaurs, the DM glancing up from behind their screen, and they wanted to make something for those people.

And I think they did.

Views From The Couch With Marquis: Fisticuffs Edition