Is Will Smith on the road to redemption after ‘slap’ video apology? 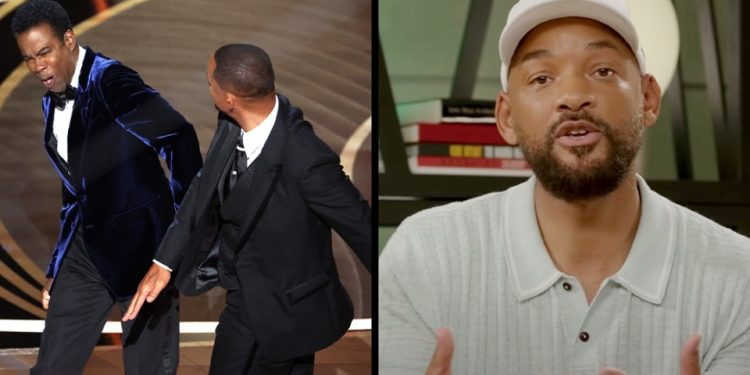 
Shortly after US actor Will Smith slapped comedian Chris Rock on stage during the 94th Academy Awards in March, he swiftly went from Hollywood royalty to castaway.

The King Richard and Men in Black star, 53, stormed the stage and slapped Rock after the comedian made a joke about Smith’s wife, Jada Pinkett Smith, and her hair loss as a result of the medical condition alopecia.

As the audience gasped in horror and confusion as to whether it was staged, minutes later when Smith returned to the stage after winning the best actor award for King Richard, he did not apologise.

In his first public video statement in three months via his Instagram,  Smith spoke directly to the camera and answered a series of questions from social media about the damaging incident that changed the course of his career.

Rock, who will be in Australia next week for eight stand-up gigs starting on the Gold Coast on August 9, addressed the apology at Atlanta’s Fox Theatrecomparing Smith to former Death Row Records executive and currently incarcerated hot head, Suge Knight, pagesix reported.

“If everybody claims to be a victim, then nobody will hear the real victims. Even me getting smacked by Suge Smith … I went to work the next day, I got kids.”

He was banned from all Academy events or programs for 10 years following his ‘‘unprecedented’’ behaviour.

But now, as Apple TV grapples with a decision on when to release his forthcoming epic slave story Emancipation, some film critics are asking – is it time to forgive and forget?

‘‘There’s never going to be a ‘perfect’ time to release any Smith vehicle in the future – whether it’s in 2022 or a decade from now – nor will the public ever forget his actions of the evening,’’ wroteVariety’s Clayton Davis after the apology video.

‘‘Apple Original Films, Westbrook Studios and all the various filmmakers attached to the project should simply bite the bullet and go forth with the film’s release, and an awards campaign, if warranted.’’

Before the infamous ‘slap’ episode, the Antoine Fuqua-directed Emancipation was seen as a serious Oscar contender for Apple TV+ after the success of coming-of-age heartwarming drama CODA.

Smith stars as a runaway slave who goes on a tortuous journey through the swamps of Louisiana to escape plantation owners who nearly killed him.

One of the most respected Black filmmakers of his generation, Variety says Fuqua has form, having directed the 2001 crime drama Training Daywhich scored Denzel Washington an Oscar for best actor.

‘‘But he’s never had his time in the spotlight,’’ it wrote.

‘‘If the buzz is accurate, both for him and actor Ben Foster [Hustle, The Survivor]Smith’s actions at the 94th ceremony shouldn’t preclude awards attention.

‘‘The apology video will serve as an industry and consumer litmus test,’’ Davis wrote.

‘‘The situation can be viewed through multiple prisms, with nuances that have been lost. It’s easy to say ‘Smith shouldn’t have slapped Rock’, and that has not been disputed by any parties.

‘‘There are two camps – those that call for the media to move on from the situation, and those that are still calling for a type of ‘professional crucifixion’ of Smith.

‘‘As the world remains as politically and culturally divided as ever, and talking conservative heads decry ‘cancel culture’ is ruining comedy, forgiveness has become the new ‘F word’, inexplicably written off by anyone willing to have a discussion about complicated subject matter.’’

Two days on from the March incident, Smith issued a public apology to Rock and the Oscars production team, saying he reacted ‘‘emotionally’’ to the joke and that ‘‘violence in all its forms is poisonous and destructive’’.

‘If you hang on, I promise we will … be friends again’

Smith said he had reached out to Rock but ‘‘the message that came back is that he is not ready to talk and when he is, he will reach out’’.

‘‘So I will say to you ‘Chris, I apologise to you’. My behaviour was unacceptable and I am here whenever you are ready to talk.’’

In the video, Smith also apologised to Rock’s mother, father and younger brother Tony, an actor, who he said had been ‘‘my man’’, before adding: ‘‘But this is probably irreparable.’’

‘‘I spent the last three months replaying and understanding the nuances and complexities of what happened in that moment.

‘‘And I’m not going to try and unpack all of that right now, but I can say to all of you that there is no part of me that thinks that was the right way to behave in that moment.

‘‘There is no part of me that thinks that’s the optimal way to handle feelings of disrespect or insults.’’

Asked whether his wife had prompted his decision to storm the stage and slap Rock in the middle of his presentation of the best documentary award, that was won by Questlove for Summer Of SoulSmith replied: ‘‘No, I made a choice on my own, from my own experience and my history with Chris.

Concluding the video, Smith said he was ‘‘deeply remorseful and I’m trying to be remorseful without being ashamed of myself’’.

He added: ‘‘If you hang on, I promise we will be able to be friends again.’’

Rock, 57, is currently touring his new material as part of his Ego Death World Tour. He also touched on the subject during recent shows in New Jersey and New York.

“Anyone who says words hurt has never been punched in the face,” Rock added, according to Us Weekly during an earlier stand-up performance.

His Australian and New Zealand tour finishes in Brisbane on August 20.

As for Smith’s Hollywood redemption, he has two projects in post-production, including Emancipationwhich IMDb reports is slated for 2023 release.

He has another six films and TV series in pre-production and a further five announced in which he has a producer credit.

Variety suggested an entire release strategy and awards campaign could start with Emancipationwithout Smith’s involvement ‘‘despite him being the film’s central figure’’.

‘‘Now that Smith has gotten his apology out of the way, it’s time for Apple to seize the moment and put Emancipation into the 2022 rotation,’’ Davis wrote.

Is trying to get healthier making you feel lousy?