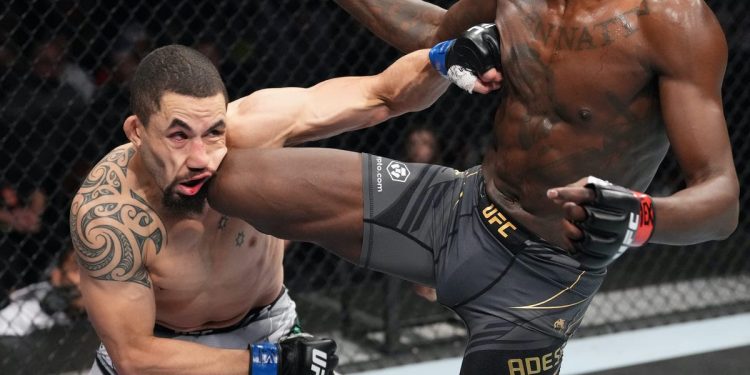 
Israel Adesanya had barely any time to celebrate his win Saturday over Robert Whittaker before he received his next challenge, and death threat.

32-year-old Adesanya has lost just once, his sole foray into the light heavyweight division, but at middleweight — where he rules as king — he reigns supreme.

He has beaten Whittaker once before, by second-round knockout at UFC 243 in 2019, but the New Zealand-born Australian fighter survived 25 minutes this weekend at the UFC 271 event inside the Toyota Center in Houston.

Whittaker scored four of his 10 takedowns but Adesanya’s general defense was strong, and he landed 98 of his 188 strikes for a 52% accuracy rate.

Whittaker’s grappling won him the fifth and final round but it was not enough to swing the scorecards in his favor as the three Octagonside judges gave Adesanya the unanimous nod (48-47, 48-47, and 49-46).

But not long after the announcement had been made, that Adesanya had won, he already had a formal challenger.

Khamzat Chimaev, an unbeaten fighter who has pummeled his way through the UFC roster so far, tweeted: “Easy money for me, 0 wrestling. 1 round I’m gonna kill him.”

The post has since been removed from the platform.

Chimaev will have to get in line and wait

Chimaev will be made to wait for his shot, as Jared Cannonier appears to be next in line for a chance to unseat Adesanya from his throne.

American fighter Cannonier looked superb earlier in the show as he came from behind to destroy Derek Brunson with a vicious elbow and back-fist combination.

Yet another elbow strike closed the show for good as Cannonier secured a statement win and then issued a demand to the UFC boss Dana White — that he fights for UFC gold in his next match.

It is likely Cannonier will get his wish.