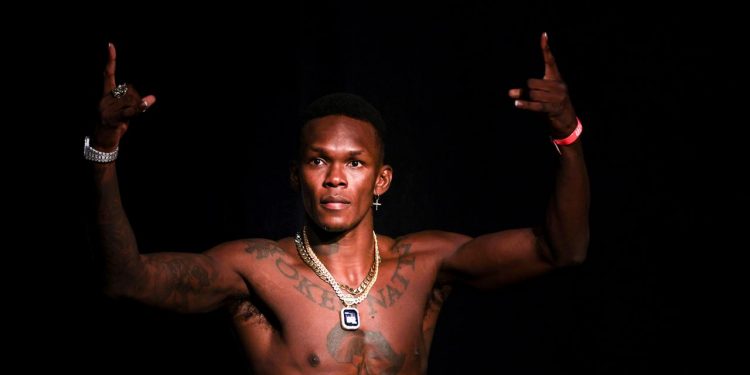 
Just a day after announcing a lucrative new deal with the UFC, Israel Adesanya believes he will sit among the sport’s very best when his career finally comes to a close.

With over 5.7 million Instagram followers and a fanbase spreading all over the world, the Last Stylebender’s popularity is rising with every bone crushing victory.

Just don’t call him a global superstar yet.

“I’m getting there, I’m not quite there yet, but I’m crossing over nicely.”

October 6, 2019 was the day the Nigerian-born New Zealander’s life changed forever – and he says a pivotal moment on the morning of UFC 243 stuck with him when he said goodbye to his old self.

“Well, I remember, I went for a walk in Melbourne because I said I’m going to go for a walk before the fight. I walked around Melbourne city, there were no masks at the time, so I was just walking around by myself, not being bothered. I think I got asked for a picture once. Just to enjoy being Izzy. I still enjoy being Izzy, just enjoying my freedom, but I bet you I couldn’t make the same walk now because it would be a fanfare. Life has changed, but I keep the same energy.”

ULTIMATE GUIDE: Everything you need to know about UFC 271

With the biggest crowd in Australian UFC history – 57,127 – watching on at Marvel Stadium in Melbourne, Adesanya’s memorable walk in was followed by a now legendary walk out, but he says not everyone loved the dance performance.

“They weren’t screaming, they were booing, and I was like oh, interesting. I came in, it was my show, my main event show. I showed off, showed out and knocked him out.”

It’s Adesanya’s striking look, quick wit, and cold, bold bravado that’s making him one of the most marketable faces in the sport.

However, behind the brash, trash-talking lies a 32-year-old with a soft centre.

‘GET’S ME HEATED UP’: Adesanya’s dream revealed amid feud with homeland

‘HE’S NO.1’: How Whittaker’s value would explode by beating Adesanya

Saturday night’s re-match with ‘arch-nemesis’ Rob Whittaker is set to be an intriguing sequel, given the 861 days between their last fight in the octagon.

“He’s improved. He’s said that, but I wasn’t just sitting on my ass twiddling my thumbs, I’ve been improving exponentially. Exponentially! I’ve gotten so much better, better than he has and I’ve gotten back to the young Izzy, who just soaks up everything and then just uses it in the gym and inspiring. So yeah, I look forward to the same thing and using it on Saturday night.”

The undefeated middleweight is intent on winning Adesanya v Whittaker 2 in “more devastating fashion” than the first time around. This time, it’s personal.

“Beat him up five straight rounds, beat him to a pulp and then finish him at the end. That’s one of my ways of victory, but I’m very confident, very confident in my skills.”

As for just how much money Izzy banked from that new deal with the UFC?

“That’s for me to know and for you to mind your business,” he laughed.