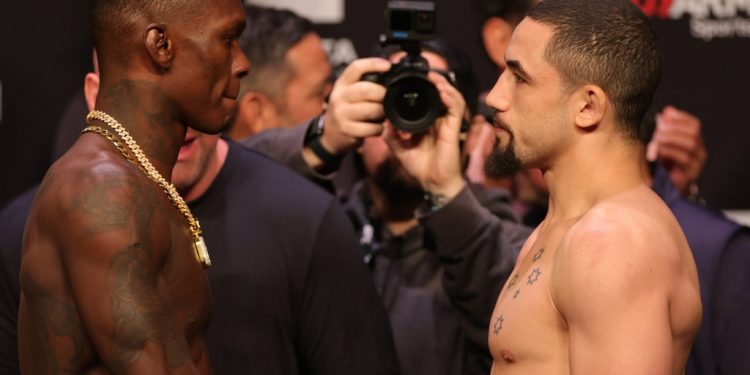 Israel Adesanya dances during his walkout at UFC 243

Nearly two-and-a-half years after they first clashed in the Octagon, Israel Adesanya and Robert Whittaker will go head-to-head for the UFC middleweight title again this evening.

In October 2019, Adesanya’s meteoric rise through the 185lbs division culminated in the then-interim champion’s victory over Whittaker in Melbourne’s Marvel Stadium, as the biggest crowd in UFC history watched their home fighter get knocked out in the second round to surrender his belt. For Whittaker, the pressure of a seismic fight against his antagonistic foe in front of more than 57,000 fans – as well as the Australia vs New Zealand narrative – proved too much, and the defending champion was unusually reckless as he was outfought by Nigerian-born Adesanya.

Whittaker has fought and won three times since then, navigating a tough route back to Adesanya, who has competed four times since beating the “Reaper”. While Whittaker recorded impressive wins against Darren Till, Jared Cannonier and Kelvin Gastelum, there were three successful title defences for Adesanya – against Yoel Romero, Paulo Costa and Marvin Vettori – though he suffered a first professional loss in unsuccessfully challenging for the light heavyweight belt last year. Finally, Adesanya and Whittaker rematch at UFC 271 in Houston, Texas tonight, where Derrick Lewis competes in front of a home crowd in his co-main event against fellow heavyweight Tai Tuivasa.

There is also a meeting between middleweight contenders Cannonier and Derek Brunson, with the winner of that contest potentially next for the victor of the main event.

Follow live updates and fight results from UFC 271, below.

Adesanya is quickly back to his feet, but he’s still being held against the fence. He eventually frees himself.

Big reactions from Whittaker whenever Adesanya feints or throws.

Whittaker blocks a high kick but eats an outside leg kick. A better round by Whittaker, but still close. Hard to judge.

Whittaker looks pretty defeated in the corner… He said the leg kicks were hurting, I think.

Whittaker is taking more chances on the feet now, double-jabs into right hands, but Adesanya is reading them well – as he did in the first fight.

Stern jab by Whittaker. That’s better from the challenger. And another on the counter!

Hard inside leg kick from Adesanya. Now Whittaker gets a huge double-leg takedown!

Adesanya drops Whittaker with a jab! Whittaker bounces back up and tries to calm himself!

Whittaker shoots for a takedown from range and it’s stuffed. These are big moments for Adesanya’s confidence; maybe more importantly, they’re tough moments for the challenger’s morale.

A great first round for Adesanya.

Whittaker already much more patient than last time. He throws an oblique kick to the knee.

Adesanya presses forward and lands an inside leg kick. Outside low kick by Whittaker. Slick jab from the champion.

Whittaker blocks a head kick and evades a front kick to the body. Low kicks now from Adesanya.

Whittaker blitzes forward as he did in the first fight – as long as he doesn’t overdo it, he should be okay.

Bruce Buffer has made the introductions… IT’S TIME!

Five rounds scheduled with the UFC middleweight championship on the line. The rivals touch gloves. Here we go!

Adesanya knocked down Whittaker on the buzzer at the end of the first round in their previous clash, before finishing the Australian in the second.

Adesanya looks so calm and confident. Much looser than Whittaker, it must be said.

Now here comes Adesanya (21-1; 15 KOs). Last time against Whittaker he danced his way to the ring flanked by friends, but it’s a more straightforward entrance for the “Last Stylebender” on this occasion.

Uncharted’s Nathan Drake and Chloe Frazer are dropping in Fortnite next week • Eurogamer.net

Uncharted's Nathan Drake and Chloe Frazer are dropping in Fortnite next week • Eurogamer.net