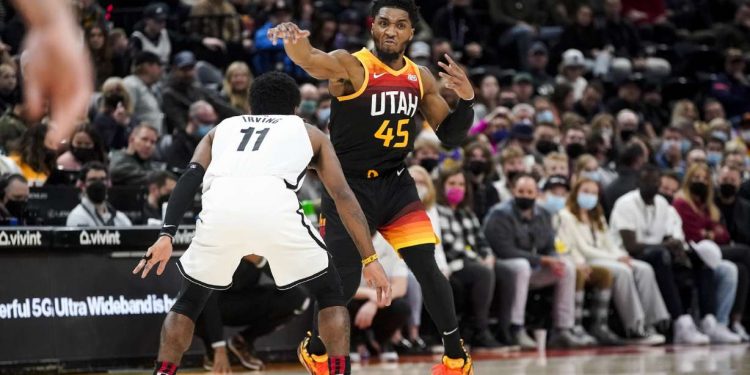 SALT LAKE CITY — There was a childlike joy radiating from Donovan Mitchell as he prepared to play his first game in three weeks.

It had been a long recovery from a concussion he suffered back on Jan. 17. He had nausea, lasting headaches and false hope. So when the moment neared for him to actually play again, he was a bit excited.

“I was making the joke before the game: I didn’t give a damn if the ball went in or out,” Mitchell said.

Mitchell was near flawless in his return — 27 points, six assists and three rebounds — as the Jazz flattened Brooklyn 125-102 Friday at Vivint Arena.

On Utah’s first offensive possession, Mitchell looked off a defender and hit a cutting Royce O’Neale on a no-look pass under the rim.

In quick succession, he drew a foul for two free throws, hit a pull-up 3-pointer, and partnered with Udoka Azubuike for a perfect pick and roll. A little over two minutes into the game, the Jazz already had a double-digit lead.

It turns out, the Jazz (32-21) are better with their All-Star guard in the lineup — who knew? Well, just about everyone.

“He takes pressure off the other guys, especially Mike (Conley),” acting head coach Alex Jensen said. “There’s so much focus on him that he frees up other guys offensively. He’s Donovan Mitchell; he makes everything a lot easier for everybody.”

For the first time in a long time, the game was easier for the Jazz.

Bojan Bogdanovic had 19 points and 11 rebounds, Eric Paschall had 16 points, and Trent Forrest continued his strong run of play with 8 points and seven assists. Everything was clicking.

The Jazz shot 56.5% from the field, 45% from 3-point range and led by as many as 34 points. Defensively, the Jazz limited the Nets, who were without stars James Harden and Kevin Durant, to 41% shooting. Kyrie Irving was just 6 of 20 on the night for 15 points.

Mitchell brought a new energy to a team that’s been desperately searching for a spark. He was 8 of 10 from the field, 6 of 7 from the 3-point line and added six assists.

“Tonight, it was catching it in rhythm, taking the same shots I was working out with, being able to get rhythm that way,” Mitchell said. “To see the ball go in on your first two shots definitely helps.”

His opening stretch set the tone for the rest of the blowout win — and it wasn’t even Mitchell’s best run of play Friday; in the third quarter, he scored 12 points in just under three minutes. It was right around then that Azubuike had to make sure what he was seeing was actually real.

“It looked like a video game,” Azubuike said. “There was one time I caught myself in the moment because I thought I was actually in a video game because it seemed like he couldn’t miss. Every shot was going on. Don, he’s a stud.”

Speaking of Azubuike, he was part of another move Friday that was a catalyst to Utah’s blowout win. In a surprise, Azubuike started over Hassan Whiteside at center — and it proved to be a masterstroke.

Azubuike had a career-high 10 points and 11 rebounds and played what might have been his best game of his young career. He played sound defense and even jumped out to contest shots.

As for Whiteside, he came off the bench with what looked like a renewed focus, making multiple defensive efforts on plays and helped lead the Jazz to a strong defensive performance. Was that him getting back into shape after dealing with a bad case of COVID-19 or was it a case of a player who felt his job was suddenly threatened?

Whatever the answer, he finished with 15 points and eight rebounds.

The version of the Nets the Jazz routed Friday was far from the championship-hopeful team the Nets hope to be by the playoffs; but for at least one night, things were fun again for Utah.

“I was happy just to be out there running around, guarding, thinking the game, just having fun playing with my teammates,” Mitchell said.

‘We play to forget what happened’: football’s refuge for girls who fled atrocities | Africa Cup of Nations 2022