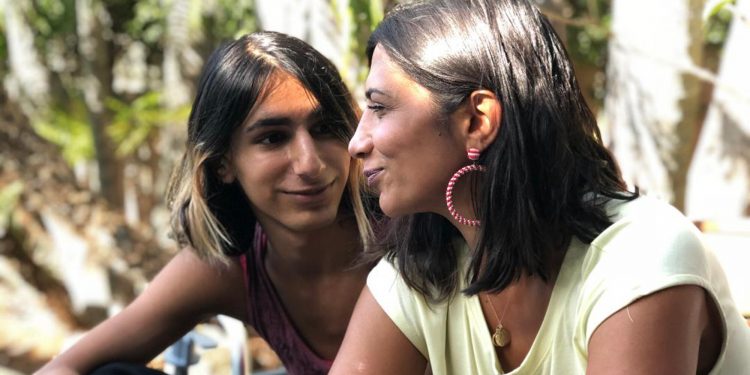 
Paria Hassouri feels fortunate that her family lives in California and not Texas, where the Republican governor recently issued a directive to investigate parents who seek “gender-transitioning procedures” for their minors.

Her 18-year-old daughter, Ava, revealed she was transgender to a teacher five years ago and now identifies as female.

“If I lived in Texas and supported my daughter when she was in transition,” Hassouri says, “I could be considered a child abuser.”

Hassouri, a physician who runs the Pediatric and Adolescent Gender Wellness Clinic at Cedars-Sinai Medical Center, and advocates are alarmed that Republican lawmakers across the U.S. have introduced a record number of bills and regulations purporting to shield young Americans from what they see as undue pressure to identify as gay, lesbian, nonbinary or transgender, or accept those who do.

With the midterm elections looming, GOP leaders see stoking homophobic and anti-transgender sentiments as way to help the party seize control of Congress in November. Their strategy was on full display at last week’s confirmation hearings for Ketanji Brown Jackson, which saw Republicans accuse the Supreme Court nominee of threatening parental rights as a trustee at a private school that, as Sen. Marsha Blackburn of Tennessee claimed, “teaches kindergarteners … that they can choose their gender.”

State lawmakers have proposed at least 238 discriminatory bills targeting LGBTQ students, athletes and curricula in the first three months of 2022, compared with 41 for the year in 2018, according to an analysis by NBC News based on data from the advocacy group Freedom for All Americans and the American Civil Liberties Union.

About half of these measures single out transgender students, such as two bills passed by the Arizona Legislature on Thursday, and one of three anti-LGBTQ bills Oklahoma senators approved the same day. Florida Gov. Ron DeSantis on Monday signed into law a bill known to critics as “Don’t Say Gay” that would ban lesbian, gay, bisexual and transgender education for students up to the age of 8. In Texas, Gov. Greg Abbott’s directive encourages people to report members of their own communities who they suspect of having helped a child receive gender-affirming healthcare.

“It is a sad and scary time,” Hassouri says.

Politicians and activists have long targeted LGBTQ citizens. Marriage equality, gays in the military, LGBTQ-themed literature in schools, transgender rights — each has served as a wedge issue in previous election cycles in what can seem like a never-ending crusade to a community that’s grown used to watching its fight against discrimination misconstrued as a conspiracy to undermine society by eroding “family values.”

As a Black man in America, I’ve always struggled to embrace a country that promotes the ideals of justice and equality but never fully owns up to its dark history of bigotry, inequality and injustice.

Now, more than any time in recent history, the nation seems divided over this enduring contradiction as we confront the distance between aspiration and reality. Join me as I explore the things that bind us, make sense of the things that tear us apart and search for signs of healing. This is part of an ongoing series we’re calling “My Country.”

Even in California, a state known as a magnet for open minds and free spirits, this culture of suspicion has attracted followers. Californians in 1978 defeated Proposition 6, a ballot measure that would’ve banned gays and lesbians from teaching in public schools on the baseless premise that these teachers could somehow convert children. About 40% of voters supported it. Thirty years later, a narrow majority of voters said yes to Proposition 8, an amendment to the state constitution that banned same-sex marriage that was later overturned by a federal judge.

Tenika Jackson, a clinical psychologist who counsels LGBTQ youth and their families, says America’s children deserve more than to watch public officials exploit a matter as delicate and personal as one’s identity in order to score political points.

“They expect the adults in their lives to be that safe space for them, and yet these are the same adults who say, ‘Oh my, something’s wrong with you,’” Jackson says.

Instead of helping the students who need support the most, she and other experts say, the bills under consideration, coupled with the politically charged cultural debates they’ve sparked, only add to the isolation and fear children cope with as they struggle to accept and love who they are.

“It’s hard for us to change that messaging in the therapy room when they’re getting that message every day at school,” Jackson says.

“For me, seeing these students as my clients, it means they will feel invisible.”

Jackson, 45, can relate to the young people she counsels who speak of the pain of having to hide their same-sex attraction from schoolmates, friends and relatives, or keep secret their feelings of having been born in the wrong gender.

She felt the need to conceal her own lesbian identity while growing up as a Black girl in Chicago.

She believes all children, not only those who are questioning their identity or who have LGBTQ parents, could be harmed.

Lawmakers who back anti-LGBTQ education bills fail to take a crucial factor into account, advocates within the queer community say: Even with the prevalence of homophobic bullying and physical harassment on campuses, for many children, schools with supportive faculty and staff may be the only place they feel free to express themselves.

“School was certainly the first place where I found safe and affirming adults,” says Casey Pick, the senior fellow for advocacy and government affairs at the nonpartisan Trevor Project in L.A., one of the nation’s largest suicide prevention networks for LGBTQ youth. Pick identifies as lesbian.

What’s especially galling to her and other advocates is the suggestion by officials in Florida and elsewhere that children risk being “groomed” or recruited by the queer community and its allies.

“This vile slander has caused centuries of violence against our community,” says Pick, 37. “It’s going back to this fear-mongering that says LGBTQ people are dangerous to children.”

The Trevor Project’s own research shows that LGBTQ youth are four times more likely to seriously contemplate suicide than teens as a whole, but that the risk drops significantly when they’re given what Pick describes as a safe, nurturing environment where gay, lesbian and transgender Americans are spoken of in a respectful way.

Many of the individual bills under consideration around the country have a poor chance of becoming law, or have faced setbacks from within GOP ranks because they are so extreme. Abbott’s directive in Texas has been temporarily blocked by a state appeals court.

Hassouri, 48, author of the memoir “Found in Transition: A Mother’s Evolution During Her Child’s Gender Change,” smiles with pride in a photograph she posted to social media last year showing her with her daughter in matching Yale sweatshirts after the teen was admitted to the Ivy League university. Ava has come so far.

Still, the current surge of legislation targeting parents, gender-affirming healthcare providers like her, school faculty and children themselves feels ominous to Hassouri.

“When you have laws like this being passed, or even just debated, and you’re thinking about coming out to your family, the idea that they’ll be accused of being child abusers is very damaging,” she says.

The rise in anti-LGBTQ bills has already caused distress among young people seeking services at the Trevor Project, Pick says. LGBTQ students have been contacting her organization, citing legislative battles in their home states as the source of their increased fear and anxiety in recent weeks.

“It is unusual for a 13- or 14-year-old to call out specific actions that are moving through committee,” Pick notes.

Jackson, the clinical psychologist, is director of a program at Antioch University in Los Angeles that trains therapists to work with LGBTQ clients who seek support at a partner organization called Colors Youth Counseling Services, which offers free mental health sessions. A mother of three, she also operates a preschool whose curriculum openly celebrates gender, ethnic and religious diversity.

In her work as a counselor, she’s listened all too often as LGBTQ children voice fears that the world won’t accept them, that God doesn’t love them, and say they’d rather hide their true selves than be shunned.

“I have to go away. I have to not exist. I think about the kids who’ve said that to me and it just breaks my heart,” Jackson says.

“When these legislators are making these laws,” she says, “they’re not thinking about that.”

The bottom line for politicians who support anti-LGBTQ measures, she says, is this: “The children are the ones who really suffer.”

Where to get help

In the Los Angeles area:

The Los Angeles LGBT Center offers counseling and other services at several locations in the city. Visit www.lalgbtcenter.org/health-services/mental-health.

MIDAS SHARE TIPS: Legal eagles DWF on the up and up

I find sex increasingly disgusting – what can I do? | Life and style

I find sex increasingly disgusting – what can I do? | Life and style